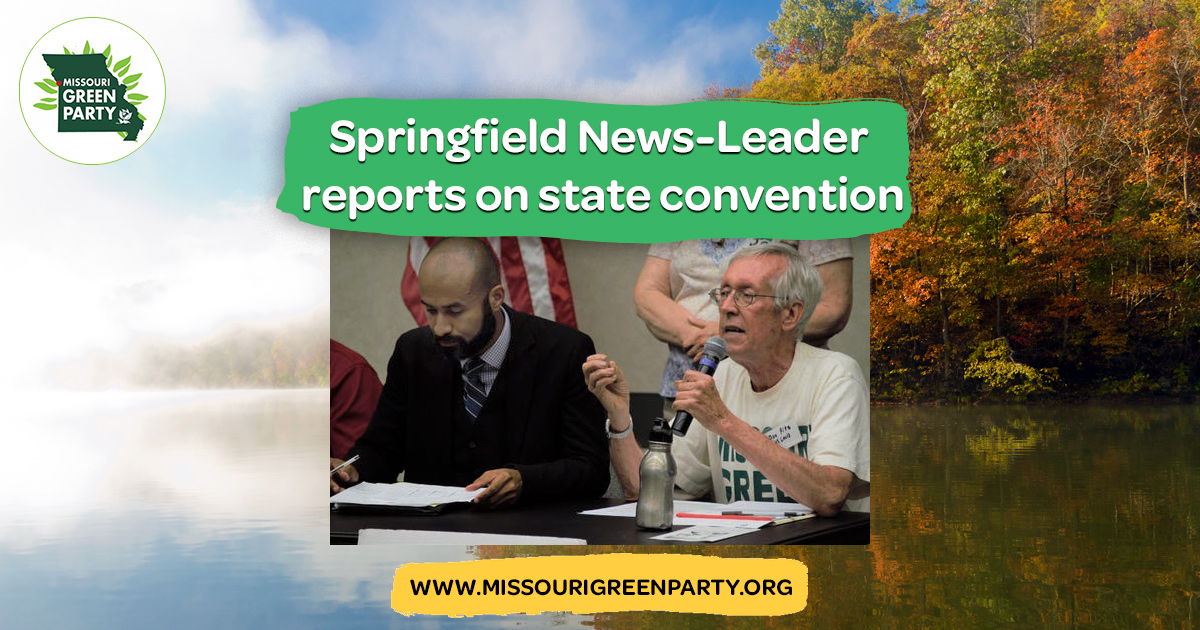 Insert photo above: Don Fitz, right, a member of the Green Party of St. Louis, comments on the Green New Deal at a panel discussion (Photo: Austin Huguelet/Springfield News-Leader)

SPRINGFIELD, MO – In Missouri's halls of power, the Green New Deal is often used as a punching bag.

When the state's dominant political party came together for its annual convention this year, Republicans like U.S. Rep. Ann Wagner blasted Democrats' wide-ranging plan to tackle climate change as a waste of money. Republicans who dominate Jefferson City agreed, writing resolutions urging the rest of Missouri's representatives to oppose the idea.

But on Saturday night in the Library Center's auditorium, it was a very different story.

For two hours, a panel of environmental activists and representatives from the Green Party discussed ideas like getting the country to 100 percent renewable energy with gusto — and then suggested doing even more.

Amy Ramirez, a Missouri State graduate student representing the youth-driven Sunrise Movement, began with an appeal for progressive Democrats' version of the Deal — the one backed by Rep. Alexandria Ocasio-Cortez of New York.

That plan sets goals for the country to supply 100 percent of the country's electricity from "clean, renewable, and zero-emission energy sources" in 10 years to stave off the worst of a climate crisis with worsening food shortages and trillions of dollars in damages.

Ramirez also highlighted parts aimed increasing the minimum wage, creating millions of good-paying "green jobs" and enacting single-payer health care coverage, which she said would address broader issues in places like Springfield, where the most recent Census estimates suggests one in four individuals is living poverty.

"It is time to act," she said. "We know we have 10 more years to fight this crisis before it is too late. We have a responsibility to do more, and we have a right to good jobs and a livable future."

But that plan wasn't enough for Howie Hawkins, a former Green Party candidate for governor in New York and current candidate for president.

When his turn to speak came, he criticized the Democrats' Deal for selling out key provisions of his party's manifesto, including an immediate ban on fracking and new fossil fuel production infrastructure.

He also called for things like a 70 percent cut in America's defense budget, which clocked in around $700 billion for Fiscal Year 2019, and a takeover of the fossil fuel industry to fund the clean energy transition.

"We need an expanded Green New Deal," he said.

Dario Hunter, a Youngstown, Ohio, school board member running for the 2020 Green Party presidential nomination, said he wanted an expanded deal, too.

But to his mind, that had to include rethinking how the U.S. interacts with other countries, including rivals like China and Iran, to end destructive wars and ensure pollution isn't simply outsourced to other countries.

Then Don Fitz of the Green Party of St. Louis said they were all leaving something out.

In his speech, he railed against the "unstated myths" of renewable energy, saying that wind and solar power still require building turbines and panels out of steel and plastic and the mining of rare earth materials that create toxic waste.

Instead of trying to replace fossil fuel energy, he said, people should be focusing on using less energy of all kinds and ending an addiction to mass-produced "crap."

"At some point in time we have to ask, 'How much stuff is enough stuff and when do we need to stop producing more?'" he asked. His answer was about 50 years ago.

The panelists then yielded for questions from an audience of around two dozen on topics including water conservation, the need to get rid of energy-producing dams, and how to frame their policies to earn voters' support.

On that last topic, Ramirez suggested it was a matter of emphasizing the new jobs and opportunities that would be created. Hunter said he would be "straightforward" about the necessity of creating a more sustainable system.

And panelist Jim Evans, who has thrice challenged Congressman Billy Long for his seat representing southwest Missouri, homed in more traditional messaging with an emphasis on how renewable energy could affect people's pocketbooks.

"What we need to talk about stewardship, taking care of our resources ... conservation," he said. "These are words that we can use that get the point of 'less,' across. If we are more efficient, than we use less and we save money."