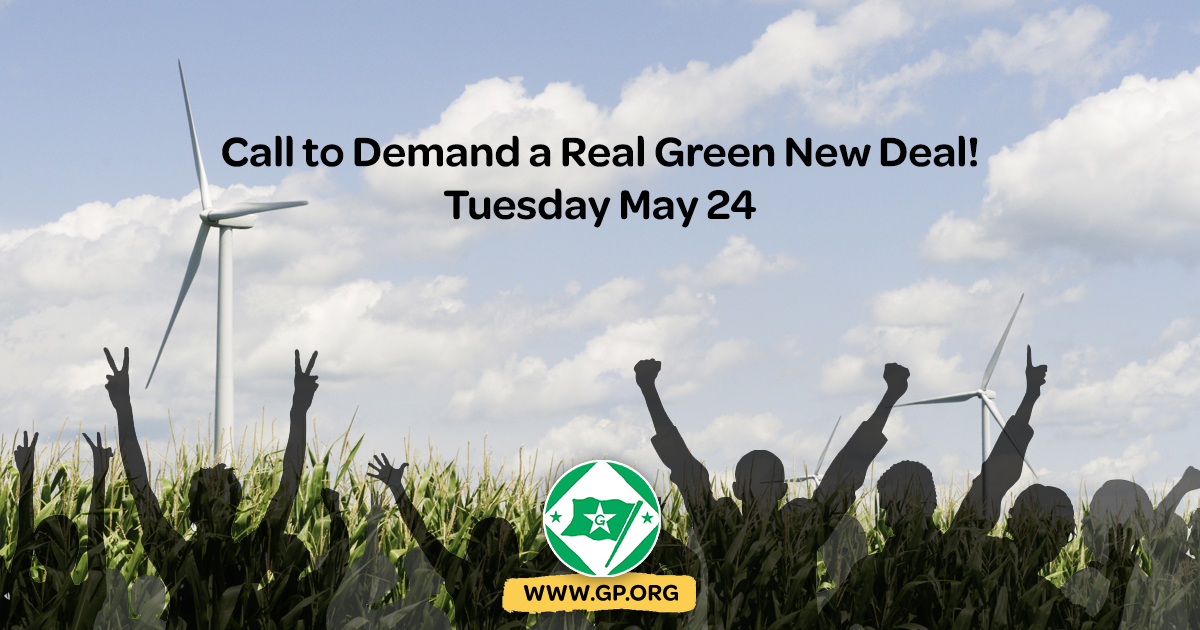 The Green Party first began calling for a Green New Deal in the U.S. in 2010. It combined a 10-year timeline for a transition to 100% clean renewable energy and zero emissions with an Economic Bill of Rights focused on a guaranteed living wage job, universal health care (expanded and Improved Medicare for All), housing, and education.

Call President Biden and Senate Majority Leader Chuck Schumer to demand a true Green New Deal. (May 24nd is the call in day but contact them any day you want.)

We need bold action now on climate change. Enact the Green Party’s original ecosocialist Green New Deal with an immediate halt to new fossil fuels: a rapid ten-year transition to real zero emissions and 100% clean renewable energy; and several trillion dollars annually for an Economic Bill of Rights. Funds need to be targeted for a Just Transition and environmental justice.

For President Biden (additional). We need you to declare a climate emergency and issue executive orders on climate as outlined in climatepresident.org

With the United Nations and world scientists repeatedly warning that there is no time left to slash emissions from fossil fuels, an ecosocialist Green New Deal is more critical than ever. While the Build Back Better climate and social spending proposals advanced by President Biden and the Democrats fall far short of the Green Party’s proposal, the meager BBB agenda gets ever smaller and still has not even come for a vote in the Senate, as the Democrats allow coal owner Senator Manchin and others to block action.

EcoAction Committee of the Green Party of the United States