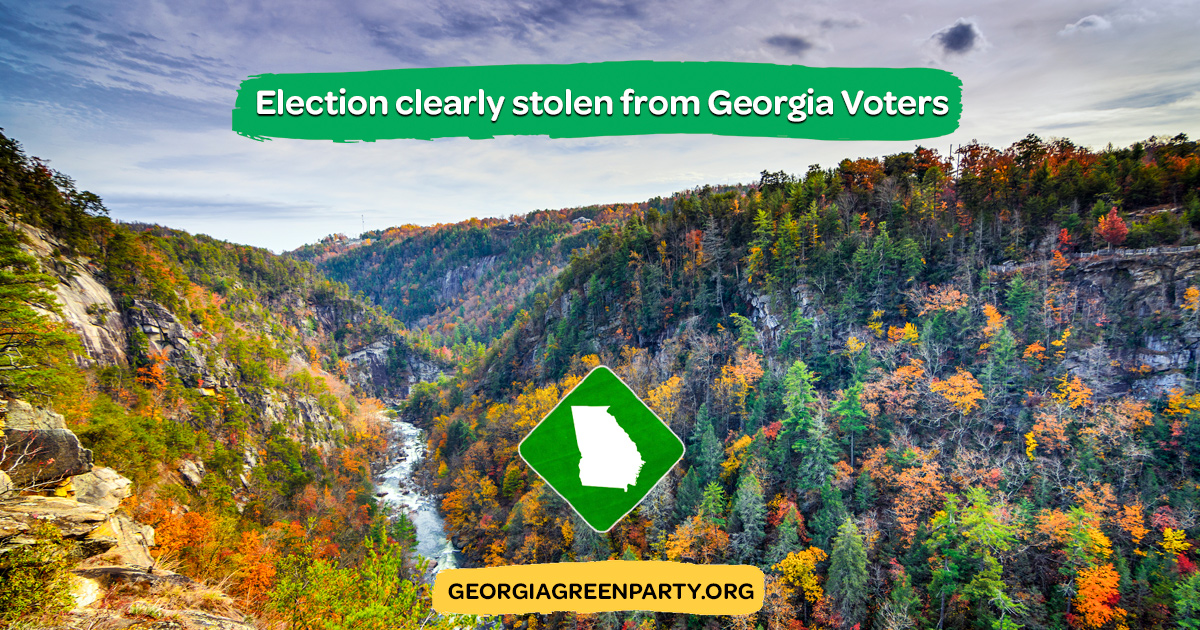 "This election was clearly stolen from the Georgia voters, in a campaign of a thousand cuts and involving at least outgoing Secretary Kemp. Undoubtedly, private profit is in there somewhere," said Bruce Dixon, cochair of the Georgia Green Party and managing editor of Black Agenda Report. "Kemp acknowledges the inherent conflict of interest in a person certifying their own election with his own resignation. It was only after he had managed as Secretary of State his own election as Governor that he took this step. How more clear can he make it that his own integrity and the integrity of the election, the legitimacy of its results were never a real concern for him."

Over the past few years Brian Kemp has purged hundreds of thousands of voters from the rolls. This cycle alone he closed over two hundred polling places, mostly in precincts where republican candidates have performed poorly. He has restricted early voting opportunities. Some 50,000 new voter registrations submitted to his office have simply disappeared. A variety of tactics resulted in hundreds of thousands of voters being obligated to use second class provisional ballots, which state law requires be subsequently defended by having the voter show up a second time to resolve questions related to their identity and registration.

"We welcome the attention of the blue team to the critical issue of voter suppression. We have much work to do if we want to operate our elections with the integrity necessary that they can serve as a means for naming a legitimate government with a popular mandate," said John Fortuin, commenting on the pending litigation and the Democrat Gubernatorial nominee's statements that she would not concede this week's election. "We welcome Abrams' insistence on an accurate vote count. We also urge her to stand firm against the pressures which will be brought to bear as we call out the theft of this election."

John Fortuin is a co-founder of Defenders of Democracy and a candidate this year for the Georgia Assembly in Senate District #46 (Walton, Oconee and Clarke Counties), a nominee of the Georgia Green Party. He is a certified write-in candidate for the 2018 general election. His status as a write-in candidate is due to a 75 year old voter suppression scheme enacted in 1943 by Democrats elected by the all-white primaries of the day. The initial intent of their rules was to deny black veterans access to the ballot in Georgia's General Election. These rules continue to keep important voices, independent of corporate wealth, off of the ballot in Georgia.

Previously, Democrat candidates have turned a blind eye to opportunities to fight for the right of voters to have the intent expressed on their ballots honored by the certified results of elections; and in Georgia have actively opposed Green Party initiatives to reform the ballot access barriers.

In 2004, in Ohio and New Mexico, witness reports gave rise to concerns that the election had been subverted and that the results would not represent voter intent, that the election results had been compromised. Results that year showed irregularities that were not credible, based on statistics and reports from voters and elections observers. The Green Party's Cobb-LaMarche campaign launched recounts in both states. The reports generated by the Green Party recount effort led to an investigation by the minority caucus in House Judiciary and became the basis for the first challenge to the seating of an electoral college delegation in the history of the country. The challenge was rejected and the Republican delegation was seated for Ohio based on compromised results, changing the outcome of the election. Ohio Green Party's former nominee for Governor, journalist and now attorney Bob Fritakas, continued the investigation, and the evidence compiled by Greens led to the prosecution, conviction and incarceration of multiple Ohio election officials, but not the revisiting of the tainted election results in a closely divided state, which changed the outcome of a national election.

Likewise in 2016, when Greens identified voter suppression issues in Pennsylvania and two other states, Jill Stein, the party's Presidential candidate for a second cycle, mobilized her campaign to raise and spend millions of dollars to initiate recounts, which appeared likely to show evidence of significant election fraud. The Clinton campaign sent an observer, but otherwise stood by and watched judges appointed by Democrat and Republican administrations shut down the effort, again changing the outcome of the national election.

"Greens and Democrats may disagree on some points of public policy. That does not mean we think it is ok when the will of Georgia voters is subverted to deny their preferred candidate a place in a run-off, or perhaps an outright majority. I urge that the Abrams campaign stand firm; and break from her party's pattern of conceding defeat in the face of victory," said Fortuin. A long time election integrity advocate, Fortuin has just published a new report, "Brian Kemp: Like his Democratic Predecessors, Suppressing Ballot Integrity and the Legitimacy of Georgia's Elections".

Fortuin's report contextualizes the finding of Federal Judge Amy Totenberg of Georgia's Northern District in her recent Order, that "State election officials had buried their heads in the sand... [on known computerized voting vulnerabilities]". The report documents the revolving door relationships between state election officials and richly rewarded private contractors doing business with the office of the Secretary of State, to provide for the administration of public elections.

"The Green Party has been raising the alarm on these critical election integrity issues since at least 2003," said John Fortuin. That year Party activists served in a leadership role with the Voter Choice Coalition, a multi-partisan coalition originally organized to work for reform to Georgia's ballot access barriers. Coalition participants worked to require that the Diebold machines produce a voter verified paper ballot, which computer scientists understood even then, as the minimum standard for election integrity.

Greens have a long history of supporting voting integrity issues, and welcome this focus on 'voter suppression' by a Democratic party candidate. "But we must demand more," said Dixon, state party chairman and Cobb County resident. "Abrams must broaden her perspective on voter suppression to embrace the need to replace faith-based computerized voting with paper ballots, to enact automatic, permanent voter registration, to provide for publicly funded election campaigns, to end the abuse of the reapportionment process to deny voters contested races among competing perspectives, to tear down the barriers to ballot access used to deny voters an opportunity to vote for the candidates of their choice, to end the exclusion of otherwise qualified candidates from the public airwaves, news reports, polls and debates. These mechanisms deny voters information about our options and are fundamentally anti-democratic. The coming years will provide us an opportunity to see if Abrams concerns for voter suppression are serious or simply motivated by her own short term partisan interests. There is plenty of this agenda she can contribute to."

"Even with all the legitimate critiques of Stacey Abrams' track record and her silence on crucial issues, there is something to be said about her fight for a fair election in Georgia," said Andrea Merida, a cochair of the Green Party of the United States. "Gillum concedes Florida, Clinton ignored evidence of flagrant 2016 violations in battleground states, Gore abandoned the field in 2000. We do not generally expect this from her Party, but Abrams is right to fight, not just for herself, not just for Black women, but for all voters in Georgia."