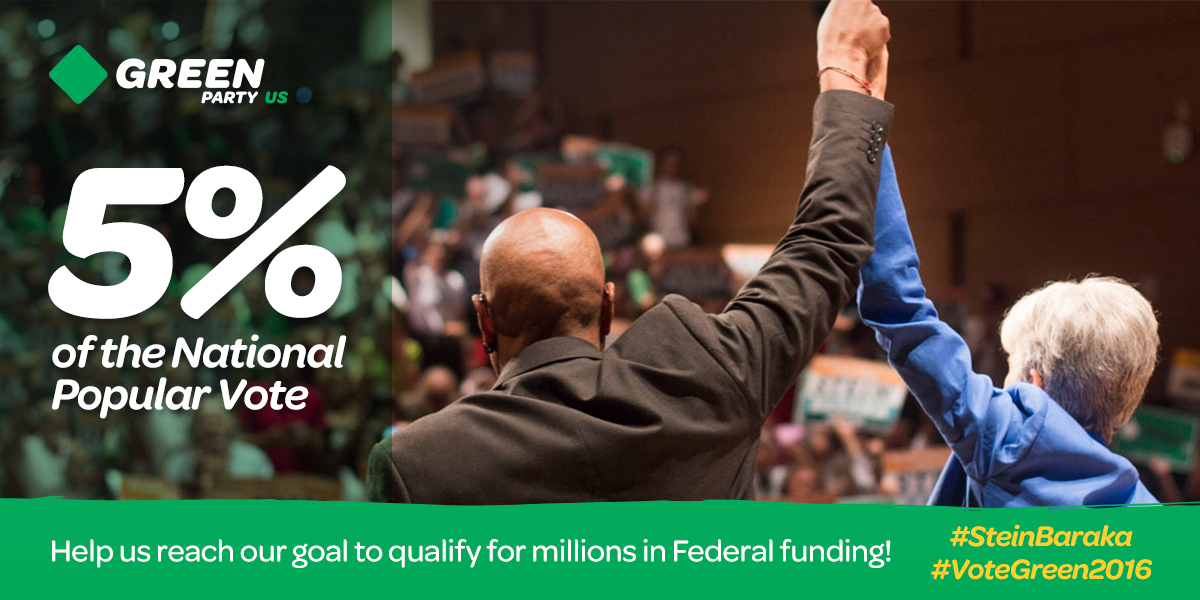 Your Green Vote Could Be Worth Millions This Year

Did you know that Green votes this year are worth between $8 and $10 MILLION DOLLARS collectively? That's because, if we achieve an average of 5% of the vote nationwide, we'll qualify for federal matching funds of $8 to $10 million dollars!

This is very do-able if we all pitch in and work together and—even more important—put our money where our party needs it to be.

Your donation today will help critical Get Out The Vote (GOTV) activities in several states in the next 6 weeks. So 5% total national vote equals millions coming to the Green Party next election cycle.

That’s why we’re writing to you today.

We desperately need to raise money for GOTV resources in key states.

Why? Because some states will have to get more than 5% if we want to average 5% nationwide.

These are states where we think it's reasonable that the Stein/Baraka ticket and our down-ticket candidates can earn 10% or more of the vote to help make up for other states where we're not as strong.

Then there's a whole group of states where, if we earn a relatively small percentage of the vote, we insure ballot access for the 2018 and 2020 election cycles.

So you see, your donation today is critical.

Get Out The Vote efforts have already started in many states. The Stein/Baraka campaign, for instance, has hired state and regional coordinators to organize, encourage, and equip thousands of volunteers.

The national Green Party is committed to sending grants to key states to help locals with GOTV activities.

We’re also investing heavily into resources for our “ground game” in several states to provide supporters like you the materials and supplies you need -- from literature in English and Spanish to buttons and bumper stickers as well.

There are tens of thousands of phone calls that need to be made; social media campaigns to be written and launched, we need to do door knocking, distribution of materials and yard signs--all of the political techniques necessary to create name recognition and win hearts, minds, and most of all, votes.

Your donation today will help pay for all of these things – and more.

This is exactly what it takes to build our movement into a party that can take on the Democrats and Republicans. The time is ripe for us to move into the mainstream — polls now show that over 50% of voters identify as independent and over 70% want a third party alternative.

Now, more than any other time, your donation can unleash a tidal wave of action that will materially build the party for 2018 and 2020.

By getting out the vote, we can make sure we have ballot access without having to petition in every state to earn it. Petitioning cost the Stein Campaign $580,000 this year. Imagine what else we could do with that kind of money!

So please, give generously so our National Party can support our state-by-state efforts.

It’s absolutely the next critical step because ...

Our success this year will determine the strength of our party for years to come!

P.S. You can make your donation monthly for even greater impact! To give a one-time donation, click here. To become a monthly sustainer, click here.