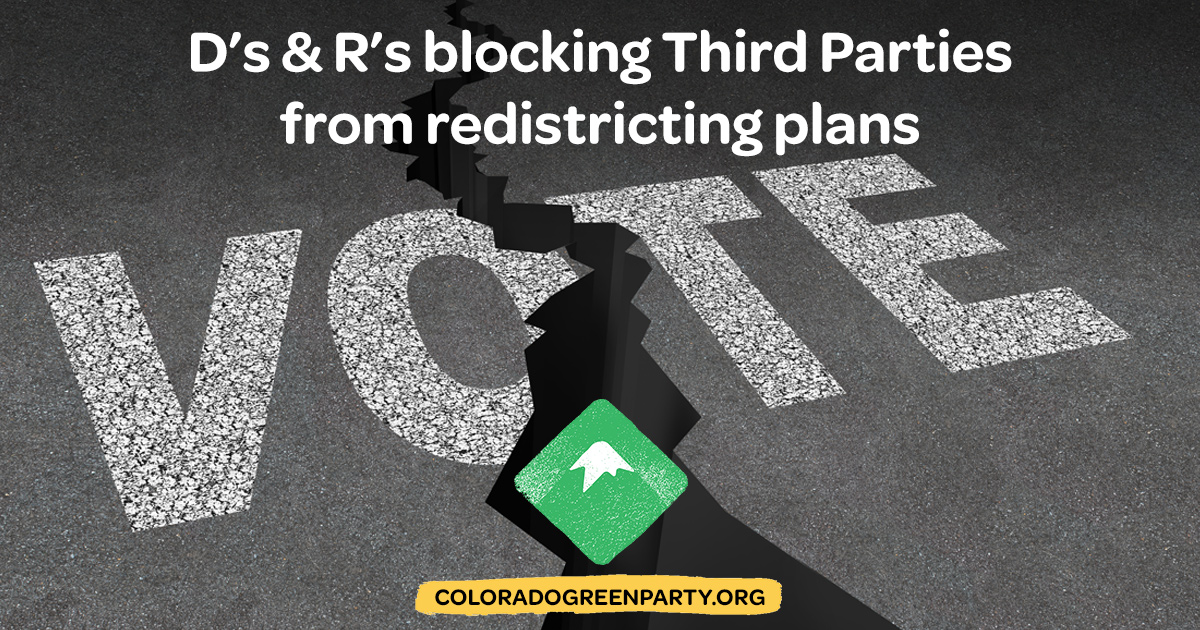 Voters in Colorado will have an opportunity in November to give themselves a greater say in the state's redistricting process. But two ballot initiatives that would create "independent commissions" to redraw legislative districts seem deliberately crafted to exclude Coloradans who are members of third parties.

Amendments Y and Z will ask voters if they want to create 12-member commissions for the purpose of redrawing congressional and state legislative districts, respectively, after the next national census. Redistricting in Colorado is currently handled by the state legislature.

If voters approve the creation of those redistricting commissions, half of the members would be selected by a panel of state Supreme Court justices, and half would be selected by the majority and minority leaders of the state legislature. Under the ballot initiatives, the commissions would each include four registered Republicans, four registered Democrats, and four people who "will not be affiliated with any political party."

The one-third/one-third/one-third split is meant to prevent either major party from hijacking the process, as has happened with similar, supposedly apolitical redistricting commissions elsewhere. But the initiatives effectively ban registered members of the Libertarian Party, Green Party, or other third parties from participating in the commissions.

The propositions are "leaving out those who have different ideas of what government of the people should look like," says Michael Stapleton, legislative director for the Libertarian Party of Colorado. "While they may include 'unaffiliated' voters, they are leaving out a good portion of those who don't want to have to choose between the Republican and Democratic [parties]."

The redistricting proposal sailed though both chambers of the state legislature with bipartisan support. Fair Maps Colorado, the nonpartisan organization that has pushed for the reforms, says independent commissions will produce districts that are fairer and more competitive. The group's website notes that Colorado has more unaffiliated voters than either Republicans or Democrats.

Neither of Colorado's two major parties has taken an official stance on the ballot initiatives yet, but it seems they are already trying to tilt the new commissions in their favor. An earlier version of Amendments Y and Z would have allowed members of third parties to serve on the commissions.

"What is clear is that the duopoly parties will employ any electoral device possible to win, short of genuine outreach to their bases and bringing legislative relief for Colorado's economic woes that impact working families," says Andrea Mérida, co-chair of the Green Party of Colorado. Mérida says Amendments Y and Z "represent a desperate attempt for the status quo for relevance in Colorado's political landscape." Stapleton calls the initiatives "just another example of the exclusionary tactics demonstrated by the Republicans and Democrats."

The amendments "were crafted to release the stranglehold that the politicians and the two major parties had on the process," says Curtis Hubbard, a spokesman for Fair Maps Colorado. Hubbard says third-party voters, who account for about 2 percent of the state's population, will benefit from the increased transparency offered by the new process, which "includes numerous opportunities for public comment, review and engagement."

Fights over redistricting are often portrayed as purely partisan affairs in which Republicans try to screw over Democrats, or vice versa. But redistricting is also about protecting incumbents of both parties.

Third-party voters are used to seeing electoral and political systems stacked against them. Just this week, New Mexico announced that it will implement party-line voting options for the 2018 elections—a change that seems suspiciously timed to coincide with a viable third-party challenge from Libertarian Gary Johnson, who is polling ahead of the Republican candidate in this year's U.S. Senate race.

Involving the public in the redistricting process is a good way to increase transparency and accountability—and a good way for pols to avoid the criticism that they are choosing their voters, instead of the other way around. But in some cases, redistricting commissions have drawn maps that favor incumbents to roughly the same degree as maps produced by state lawmakers. A 2017 paper from researchers at UCLA found that state legislatures' maps turned out to be safer for incumbents than 77 percent of a set of possible alternatives created by computer simulations. Maps produced by independent commissions were only marginally less favorable for incumbent lawmakers.

A statistical analysis of congressional district maps produced by Azavea, a geospacial mapping firm in Philadelphia, found that independent redistricting commissions do a better job at crafting geographically compact districts, which can be measured by a variety of metrics.

Colorado's redistricting commission proposal is likely to be a modest step toward reforming how legislative districts are drawn. It is one of several states with such proposals headed for the ballot this year. But excluding third-party voters from serving on the commissions is a troubling sign for a proposal that is supposed to make redistricting more inclusive.