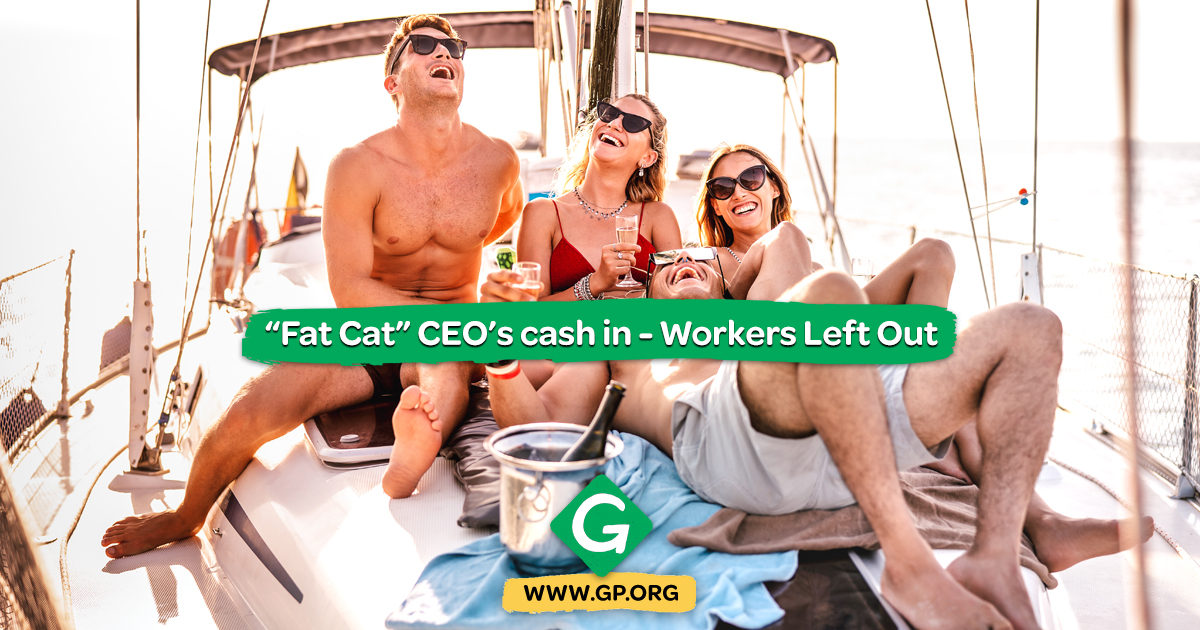 As 2023 starts off, people are wondering how high inflation will raise prices on basic goods and services and curtail hiring and wage increases but there’s one group who doesn’t have a care in the world – the 100 highest paid CEO’s who continue to earn record-breaking salaries, anywhere from 300 to 1,000 times more than the wages of the average worker.

Yes, it is Fat Cat Day! Originating in the UK, where the High Pay Centre and the Chartered Institute of Personnel and Development designate every January 4 to draw attention to the huge discrepancy in salaries of the top 100 FTSE (Financial Times Stock Exchange Index) companies’ CEO’s and that of the average worker but that gap in salary is even wider here in the United States.

The Green Party advocates for the rights of workers and their families by advocating for the right to unionize, a living wage, a safe work environment, paid sick and leave time and to form workers cooperatives. Greens around the country have joined in and supported striking workers from Amazon, Starbucks, Caterpillar and coal miners in Alabama. These union busting companies also have some of the widest gaps between the CEO and worker salaries. Starbucks’ former CEO, Kevin Johnson took home a salary that was a whopping 1,549 times that of the average Starbucks worker in 2021.

Can you help support the Green Party’s support for workers’ rights?

Not only are these obscene CEO salaries a slap in the face of all workers but a portion of these dollars end up as campaign contributions to the two parties of war and Wall Street or lining the pockets of lobbyists who advocate for the likes of pharmaceutical companies, the fossil fuel industry and multinational companies like Walmart that have some of the lowest wage workers in the country. The Green Party and its candidates accept no corporate donations. We rely on contributions from you to fund grassroots campaigns and build the party state by state, city by city.

Will you make a donation of $15.00 or whatever you could afford today to support Green Party candidates this year?

P.S. Our monthly sustaining donors are the lifeblood of the party and we are immensely grateful for them. If you haven’t already, consider joining the ranks of our Monthly Sustainers.

The Green Party of the United States
http://www.gp.org/