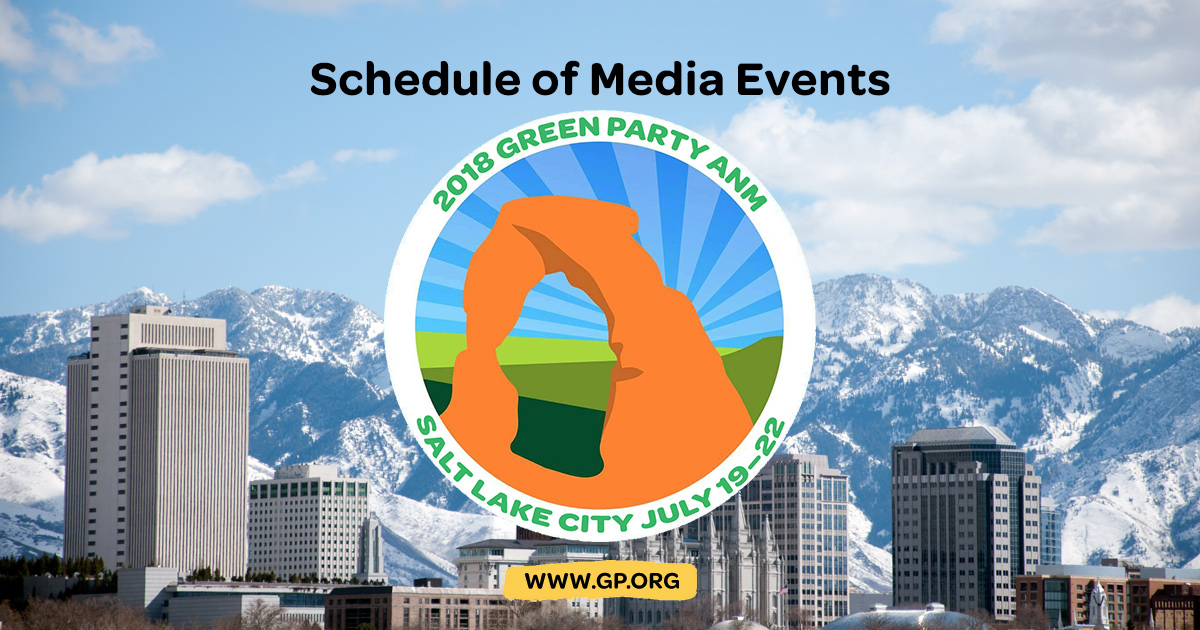 The Green Party of the United States has posted its final schedule of events open to media during the party's 2018 Annual National Meeting at the University of Utah in Salt Lake City from July 19 to 22. The schedule is appended below. Former presidential candidates Jill Stein and David Cobb will be attending along with Green Party candidates running in 2018.

The Green Party's meeting will take place on the Peterson Heritage Center at the University of Utah. Many of the meeting events are open to the media and general public.

The meeting will feature Green Party workshops, meetings of the Green National Committee (not open to the media and public), and other events.

The opening ceremony on Thursday evening will feature Carl Moore of PANDOS and SLC Air Protectors and Chase Iron Eyes, an American Indian activist, attorney, politician, and a member of the Standing Rock Sioux Tribe.

WHERE: Press conferences will be held in Room 1A at the University of Utah Peterson Heritage Center, 151 Connor Road, Salt Lake City. The opening ceremony Thursday evening will be held at the Post Theater, 245 South Fort Douglas Blvd., Salt Lake City

SCHEDULE OF EVENTS FOR THE MEDIA

Carl Moore will lead a traditional indigenous ceremony (no recording during ceremony) to welcome the participants to and honor the land upon which the event is being held. Moore is the Co-founder and Chair of PANDOS (Peaceful Advocates for Native Dialogue and Organizing Support) and SLC Air Protectors. PANDOS advocates for human dignity and Native sovereignty by educating the public. SLC Air Protectors advocate for responsible air stewardship through personal life choices and communal sovereignty. Carl is a believer in the real connectivity between all life, the Earth and our environment.

Chase Iron Eyes, a featured speaker, is an American Indian activist, attorney, politician, and a member of the Standing Rock Sioux Tribe. He is facing possible prison time for the charges waged against him for his actions at Standing Rock and he has refused a plea bargain. Chase is refusing to surrender in the epic battle for climate, human rights and democracy at Standing Rock.

Details for all of these events are subject to change.