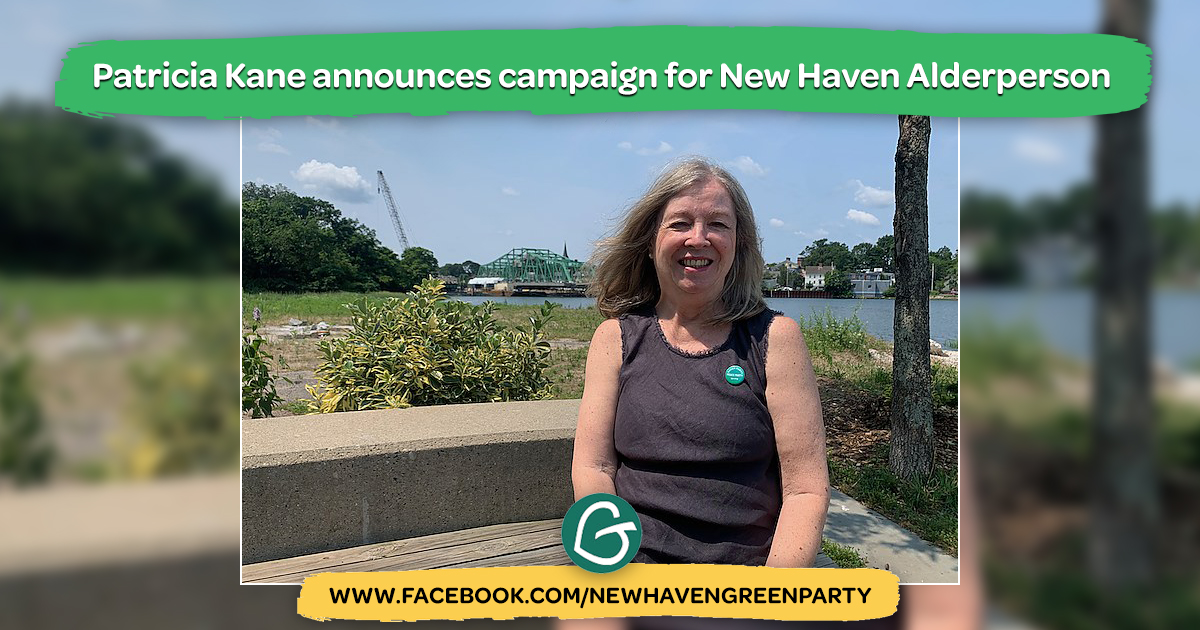 Something fishy was going on in Fair Haven Heights — and Patricia Kane was there to promise to get to the bottom of it.

Kane showed up on the banks of the Quinnipiac River Thursday to announce she is running as a Green Party candidate for alder in Fair Haven Heights’ Ward 13, a seat currently held by Democrat Rosa Santana. The Republicans Thursday evening chose a candidate to run in Ward 13 as well this year: Deborah Reyes.

Some humans came to support Kane at Thursday’s announcement, held at the canoe ramp off Clinton Street and Quinnipiac Avenue.

During her pitch, a couple of fish joined in. They mysteriously swam to their demise from the Quinnipiac River and onto the rocky canoe ramp shore, where a graveyard of ten other dead fish formed.

That called attention to one of three fishy issues that Kane plans to tackle if elected: the need to restore the canoe ramp and maintain the waterfront; the need to help prospective business owners like one planning a new restaurant at 3 Clifton St. to work through bureaucracy; and the need of government to do a better job of notifying residents citywide of pending public approvals for new neighborhood developments.

Kane has visited management teams citywide to promote a plan to address the latter issue, with a proposed mandatory notice ordinance.

The canoe ramp “is the sole public recreational access for my neighborhood” said Kane.

The ramp has a collapsing slab of concrete falling into the river and an incomplete walkway, and is overwhelmed with the smell of dead fish.

“I would come here more often if it wasn’t overrun by the smell of dead fish,” said Kane.

The city has been slow to fix broken fencing and concrete and to add fishing tubes, she said.

The Urban Resources Initiative (URI) continues to keep up with maintenance of the Clifton Street River Garden and some upkeep of the canoe launch, as it has since since 2018. Kane also cleans up the canoe ramp’s trash weekly.

“This is a precious community resource. but it gets no support from the city,” said Kane. “People in cities need access to nature.”

Westville resident Dennis Serfilippi said he looks forward to Kane’s run because of her past advocacy of her neighborhood’s quality of life, traffic calming, and transparency through Freedom of Information requests to the city.

“I think she’d be a tremendous asset to the board for the entire city,” said Serfilippi.

Kane has lived five year in Fair Haven Heights and 15 years in New Haven. She previously lived in Dwight before moving to the Heights.

The building at 3 Clifton St. use to house a fish market, then a restaurant. Its planned replacement is called the Q-River Grill, to include a bar and banquet room. The builders originally failed to get the proper building permits, said Kane. She promised to help them in any way in order for a September opening

If elected, Kane said, she hopes to help others do the same in the Heights, which has a “lack of businesses to serve this community.”

Kane is the chair of the New Haven Green Party. If elected alder, she said, she plans to challenge the Board of Alders’ “conventional thinking.”

A retired attorney, Kane still provides pro bono representation to civil justice activists. She is involved in many volunteer community causes. She has worked with management team on several neighborhood beautification projects and a 8000 mask distribution this past winter.