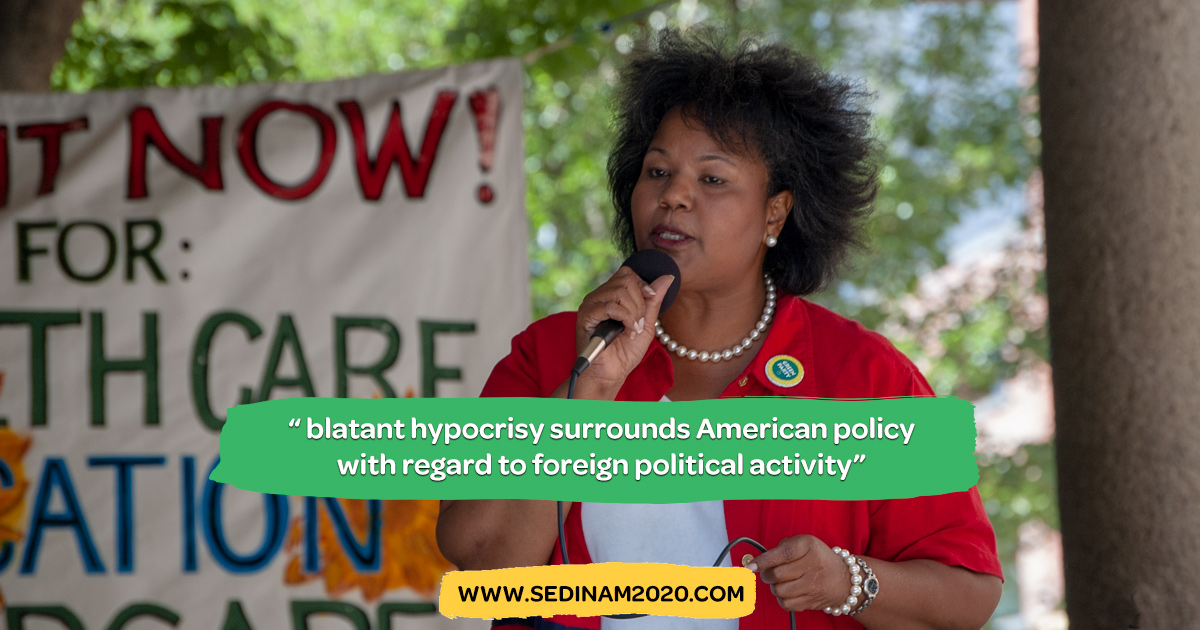 "The Mueller investigation and the unfolding political crisis in Venezuela share a key feature - the blatant hypocrisy that surrounds American policy with regard to foreign political activity," Moyowasifza-Curry stated. "The United States has a documented terrible history of meddling in the democratic political processes of other countries. But at the same time, it's 'do what I say, not what I do' position when it comes to our own elections, and that must stop."

"What we need is a mechanism for enforcing the same conditions on our own international activity that we apply to others'. At the same time, we must make it clear that foreign intervention in our elections cannot stand. Democracy is incompatible with shadowy actors and players using piles of money to push hidden agendas on the voting public, whether here in the US, Venezuela, or anywhere else in the world. The people of a country are the only ones who should determine the leadership of that country, period."

Moyowasifza-Curry's proposal would amend Section 30121 of the Federal Election Campaigns Act, 52 USC 301. Currently, that section makes it a crime for people who are neither citizens nor permanent residents of the US to make contributions to candidates for Federal, state or local elective offices, or to any US political parties. The "Electoral Non-Interference Act" (ENIA) would apply the same prohibition to US citizens contributing to foreign political candidates and parties, and would extend both crimes to government agencies, private corporations, or any other legal entity. US entities would be banned from contributing to foreign candidates and parties, and non-US organizations would be barred from contributing to American political campaigns. Further, the ENIA would specify that such interference, by Americans in foreign elections or foreign actors in US elections, was a felony punishable by significant fines and possibly prison time. It would also require that any US election assistance, either by government agencies or private individuals or organizations, be routed through official election management institutions or nonpartisan NGOs and be specifically for improving election mechanics and advancing democratic principles more generally, and not for the promotion of any candidate, political party or policy platform.

"If the United States is to truly be a beacon of democracy to the world, we have to abide by the principles set down in our founding documents, and we have to hold ourselves to the same standards we demand of others," Moyowasifza-Curry explained. "For people who are concerned about Russian 'meddling' in the 2016 US Presidential election, this puts weight in our existing laws. For those who believe the USA shouldn't meddle in other countries' elections, this would ensure the same laws apply to ourselves."

T. Oliver, Pacific Green Party of Oregon State Coordinating Committee Co-Chair, Delegate to the GPUS National Committee, and a Moyowasifza-Curry campaign advisor, highlighted the hypocritical attitude many American political leaders have when it comes to American versus foreign elections. "People get all bent out of shape when other countries buy a few thousand dollars' worth of Facebook ads, with little measurable effect, but we think it's perfectly fine and proper to tell Venezuela or Ukraine or anybody else who they should elect, and to spend millions to make it so. That's not democracy, that's bullying. As President, Sedinam Moyowasifza-Curry will use her elected position as a bully pulpit, but won't bully other people and nations."