Forget Red vs. Blue: The Paradigm for the 21st Century is Orange, Purple, and Green 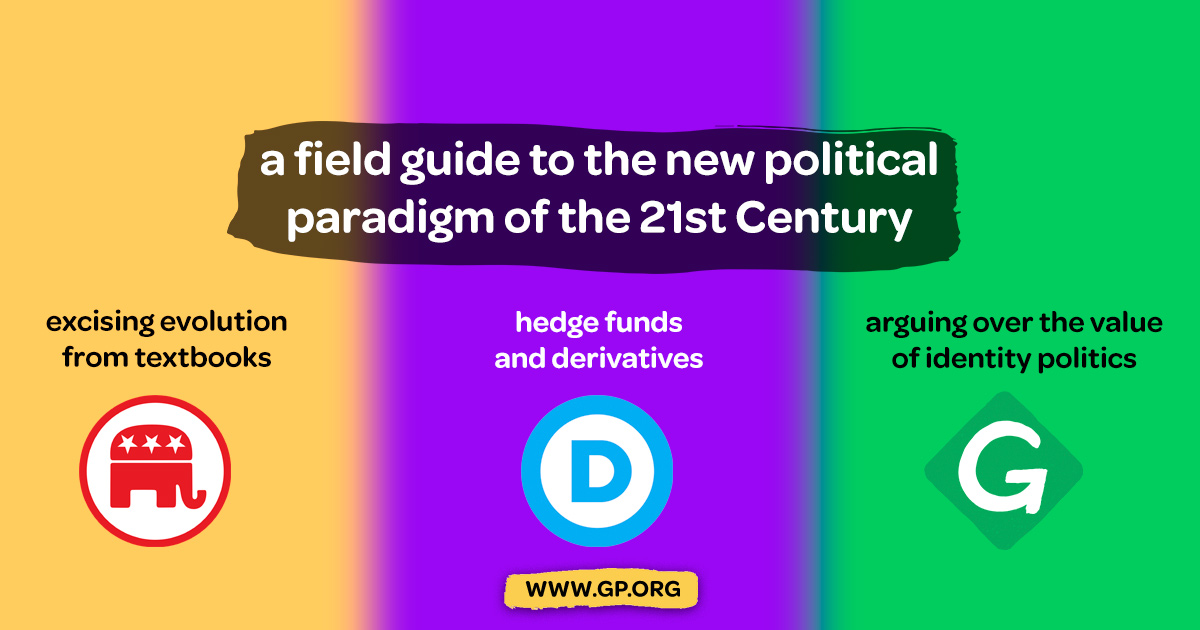 By now, most of us have noticed a paradigm shift that has made traditional political labels obsolete.

Red versus Blue (Republican conservative right-wing versus Democrat liberal left-wing) seemed to work for the last century, but it’s not working for the mess we’re in now.

The binary opposition began to fall apart late in the 20th century, when the Cold War between capitalist west and communist east came to an end. The alleged triumph of capitalism, celebrated as the End of History, allowed U.S. politicians of both major parties who were loyal to corporate oligarchy to claim the mainstream and call themselves visionary moderates.

When both Newt Gingrich and Bill Clinton declared the end of Big Government, it was a hint that Red and Blue were already blending.

Then the 21st century arrived. Fractures punctuated by the 9/11 attacks, the 2008 economic meltdown, and the election of Donald Trump in 2016 pushed us into new terrain.

It’s time to retire the Red vs. Blue paradigm and replace them with new colors. I propose Orange, Purple, and Green.

Some will argue that the tri-color scheme is reductionist. That’s correct, but it’s a reduction far more accurate and useful now than the Red and Blue binary. Donald Trump doesn’t fit the Red mold set by Presidents Eisenhower, Nixon, or even Reagan. Alexandria Ocasio-Cortez (D-N.Y.) and Nancy Pelosi (D-Calif.) represent competing ideologies within the Democratic Party.

What do the three colors mean? I’ll begin with Orange.

By blood, I mean white supremacy, not ethnic pride. By soil, I mean nationalism, not love of one’s country. By faith, I mean theocracy and fundamentalism beyond personal devotion and practice of one’s religion.

The 20th century gave us an array of colors for ultra-right movements: Italian Blackshirts and the Black Sun of Nazi occultism, Hitler’s Brownshirt stormtroopers, Aryan white and KKK bedsheets.

Instead, let’s use a 21st-century symbol: the preternatural orange tint of a certain president’s coif. Am I the first to notice?

The current slogan of the Orange crowd is “Make America Great Again,” shouted in support of ideas like President Trump’s border wall, a fake solution to a fake emergency based on an appeal to white panic over brown-skinned immigrants. Oranges love scapegoats.

Contrary to social media memes, Donald Trump himself isn’t a fascist. His grasp of politics is too shallow to assign an ideology.

Before the Reagan Era, traditional Republicans, with an ideology expressed by Calvin Coolidge’s “The business of America is business,” mostly ignored the more blatant theocrats and racists, aside from opportunistic appeals for votes like Nixon’s “southern strategy.”

Some traditional Repubs, like George F. Will, were so disturbed by Mr. Trump’s nomination that they fled to the Democratic Party.

Donald Trump’s 2016 win might be no more than a temporary Orange ascendancy in the U.S., but it represents a political strain that probably won’t disappear soon. The victory of Jair Bolsonaro in Brazil, ultra-nationalism in the U.K. that led to Brexit, and far-right movements elsewhere in Europe show Orange on the march around the world.

Henry Giroux sums up the Orange menace: “Trump has repeatedly used language associated with a fascist politics and ruthless dictators. Incapable of both empathy and self-reflection, he can only use language in the service of lies, vilification, and violence…. The entrepreneurs of hate are no longer confined to the dustbin of history, particularly the 1930s and 1940s. They are with us once again producing dystopian fantasies out of the decaying communities and landscapes produced by forty years of a savage capitalism.”

• Orange Shibboleth: Which offends you, police violence against black people or black athletes kneeling during the national anthem in silent protest against police violence? (Orange answer: “Fire the athletes!”)

• Orange Wet Dream: That lesbian couple who live down the street get struck by lightning.

• Orange Confession: “My gun collection compensates for a small penis.”

• Orange Complaint: “I had to share a public restroom with a transgender person!”

• Orange Bullshit: “All 1.8 billion of the world’s Muslims are personally responsible for 9/11.”

If you’re a frequent guest on MSNBC, you’re probably Purple. If you’re too big to fail, you’re definitely Purple.

Purple is where Red and Blue overlap in their dedication to corporate profit, power, and privilege. Some might balk at placing the two major parties in the same bin, but partisan bickering often obscures the fact that the mainstream of both parties tend to agree on neoliberal premises that underlie sharp surface differences.

Democrats, for example, want to keep Obamacare while Republicans want it repealed, but both agree that guaranteed hefty profits for the insurance and pharmaceutical industries must remain a primary goal in any health care plan.

In other words, the fierce debate between Ds and Rs concealed a competition between two Purple factions over the best way to satisfy corporate lobbies and hold the fort against demands for Medicare For All.

In the early 1990s, President Clinton and the Democratic Leadership Council embraced the Reagan Revolution when they decided that chasing after support from the One Percent was more important than serving the party’s traditional constituencies. Hillary Clinton carried her Purple credentials into the 2016 election.

Purple was the royal color in imperial Rome, which makes it suitable for a political and business establishment dedicated to global U.S. hegemony. The mainstreams of both major parties have endorsed the neocon doctrine that the U.S. has a right to attack any country at will, even those that haven’t attacked us first — Iraq, Libya, maybe Venezuela or Iran soon.

Purple doesn’t invalidate the differences between Blue and Red where they exist. Gun control is Blue, kowtowing to the NRA is Red. And the bipartisan $716 billion defense budget for 2019 is Deep Purple.

Plutocrats have always been with us. Thomas Jefferson fretted over “the aristocracy of our monied corporations, which dare already to challenge our government to a trial of strength, and bid defiance to the laws of our country.” Unrestrained capitalism strengthened by Supreme Court decisions like Santa Clara County v. Southern Pacific Railroad Company (1886) gave us the Gilded Age of the late 19th century. The Santa Clara ruling effectively transferred 14th Amendment “personhood” rights from newly freed blacks to corporations.

The Purples’ “forty years of a savage capitalism” have roots in neoliberal economic theories advanced by Friedrich von Hayek, Milton Friedman, and others in the Mont Pelerin Society, which advocates a market free from state interference. Prime Minister Margaret Thatcher and President Ronald Reagan made these theories mainstream.

The dirty little secret of the Purple camp is that no billionaire or CEO actually believes Free Market fairy tales. The corporate sector has always depended on Big Government interventions like taxpayer-funded subsidies, low-interest loans and bailouts, privatization giveaways, crony contracts, a license to consolidate ownership and assert monopoly control over markets, international trade deals that privilege business elites over workers and the environment, impunity for corporate crimes, and wars for control over foreign resources.

All of these things enjoy bipartisan support. Purple ideology is ultimately a pledge of allegiance to the transfer of wealth and power to the One Percent and transformation of democracy into a wholly-owned subsidiary of Big Business.

• Purple Shibboleth: Should Congress restore Glass-Steagall, slash the military budget, and enact carbon taxes? (Purple answer: “No! No! No!”)

• Purple Kin: Cousin who got a job making more money than you’ll ever make, according to your parents at least twice a week.

• Purple Pet Peeve: Someone said billionaires should be taxed at the same rate as their employees.

• Purple Complaint: “When they criticize billionaires, it’s like how Hitler treated Jews!”

• Purple Bullshit: “I got that $5 million bonus because I earned it.”

• Purple Scary Underside: The nexus of intelligence agencies and private companies collecting data on every American.

Who’s Green? Bernie Sanders (Ind-Vt.), progressive upstarts in the Democratic Party, the Green Party, Socialist Alternative, Democratic Socialists, Occupy Wall Street, Yellow Vests, the Sunrise Movement. If you welcome a question from school kids about the Green New Deal instead of scolding them, you might be Green.

We’ve always had a progressive left, with socialists, ecologists, and movements for peace, social and racial justice, and human rights at home and abroad. But they constantly got folded into the Democratic Party and neutralized, with more radical movements hovering around the margins and commanding little public attention.

The 21st-century “no more business as usual” version became visible with Ralph Nader’s Green Party campaign in 2000 and Occupy Wall Street in 2011. Mr. Sanders’ unexpected popularity in the 2016 election confirmed that a realignment was under way and the Green tendency was now a major force on the political scene.

In the 20th century, it was enough to label those on the left socialists and paint them red. But the climate crisis has reoriented the left towards saving civilization, while the disasters of Stalin and Mao, as well as state capitalism in post-Mao China, led to a socialism that rejects concentrated and militaristic state power. The color’s previous symbolism was upended when Republicans were christened (non-commie) Red under the binary nomenclature.

Rep. Ocasio-Cortez has made promoting a Democratic version of the Green New Deal her mission in Congress. The Green New Deal has been around since 2010, when Green Party candidates introduced it as a plan to solve the climate crisis, create a just economy, and end U.S. imperialism.

No ideological camp is pure. Donald Trump, a billionaire real-estate tycoon, is as much Purple as Orange. Progressive Democrats in Congress and Mr. Sanders often side with neoliberal Dems on foreign policy and homeland security. They tend to surrender to Purple during election years, declaring “We have to get establishment Ds elected in order to defeat Rs.”

Some in the Green camp will object that I lump vacillating progressive Democrats with alternative parties and movements that demand deeper structural change, just as many Trump voters will resent the association with Neo-Nazis. But I’m not describing unified movements, I’m identifying general tendencies and shared premises that are shaping this century’s political landscape. There are different shades of Green.

Ultimately, all of those under the Green rubric will have to declare independence from Purple Democrats. In the U.S., Green is the weakest of the three colors, but it remains the only hope for the future. Half of the GOP has migrated into Orange territory and bipartisan Purple has failed to deliver for working people. Neither is capable of dealing with climate change, the crisis of the century.

Under unchallenged Orange and Purple rule, the world will sink into deeper conflict, greater corporate oligarchy, and more devastation and chaos as the climate crisis worsens. Greens have a lot of work to do.

• Green Shibboleth: Should we make health care a right for everyone? (Green answer: “It’s already a human right!”)

• Green Fun: Arguing over the value of Identity Politics.

• Green Confession: “After vegan dinner, I went out for a Big Mac.”

• Green Complaint: “Drivers are failing to appreciate why our protest march is blocking traffic!”

• Green Bullshit: "Don't worry, the collapse of capitalism is just around the corner."

• Green Founding Mothers and Fathers: Tom Paine. Sojourner Truth. Eugene Debs. Everyone who has fought for the rights of working people, for the poor, for justice and freedom, for peace, for a healthy planet.

• Green Shock Troops: All those in The Resistance who’ve figured out that Robert Mueller won’t save America and restoring establishment Dems to power won’t change the country’s dangerous direction.

Scott McLarty is former media director of the Green Party of the United States. He lives in Washington, D.C.