Gentrification and the end of black communities 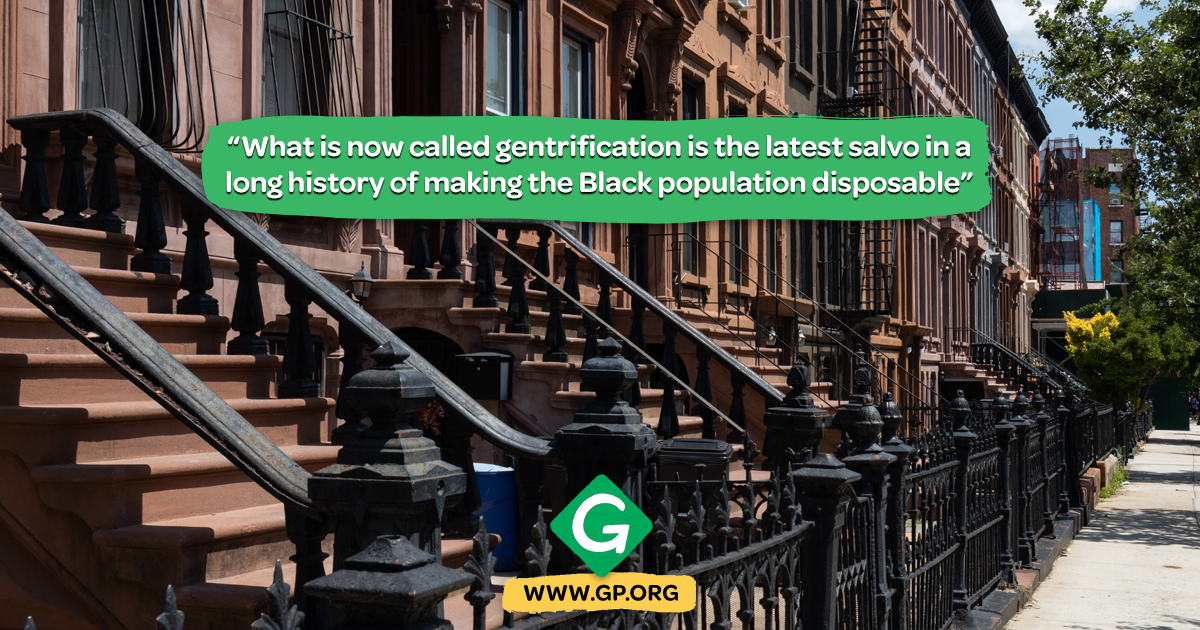 The devastation has been wrought by finance capital, which has once again upended life for Black people. Money was taken out of the cities in the 1950s and 1960s, creating what was known as “white flight” to the suburbs. Now the same forces have reversed themselves and are putting money back into the cities, and Black people are the losers. Neighborhoods that were once afterthoughts and the butt of jokes are suddenly declared “hot” if real estate speculators target them for change.

The how-to of moving Black people out of a community isn’t difficult at all. The median price for a home anywhere in Brooklyn is now $900,000 . A well-kept brownstone in Crown Heights or Bedford-Stuyvesant can now fetch seven figures. Home purchases which once required living wage employment and thrifty habits now require a small fortune that Black people rarely have.

What is now called gentrification is the latest salvo in a long history of making the Black population disposable and dependent upon the whims of racist reaction and capitalism. Urban renewal, known as Nego removal, destroyed entire communities. Financial institutions used red lining to determine where a mortgage could be obtained. Often these rules were used to keep any Black person out, regardless of financial circumstances.

Those circumstances are usually tenuous. Living wage jobs are no longer plentiful, as the same finance capital interests sent manufacturing jobs to other countries, leaving nothing but low wage jobs or even so-called gig work, which guarantees nothing but the precarity that the system demands.

Gentrification even impacts the criminal justice system. An increasingly white jury pool in Brooklyn means that defendants, mostly people of color, are more likely to be convicted. Civil cases are less likely to be decided in favor of plaintiffs and awards are smaller as the borough’s income and education levels rise.

Generations of culture are being lost, families are dispersed, and even homesellers who can make the proverbial killing are saddened that their good fortune only accelerates the process of displacement. Everyone laments the process but they are silenced because their losses are rarely acknowledged. We are told that people have the right to live where they want. But that right exists only for those with access to lots of money. The average Black working person depends on a salary. Even those with higher incomes don’t have access to cash or to a family legacy of wealth, and they are automatically out of the running.

The problem of course is capitalism itself. Black people shouldn’t be blamed for not pulling themselves by imaginary bootstraps when the paths to success are closed to them by discrimination and when the rules they were told to follow are suddenly changed. Even a college education is no longer a ticket to success. Student loan debt is a burden to people who believed they were helping themselves when they took on what was once a key to success. Black college graduates now start off their lives deeply indebted while also relying on incomes that are less than those of their white counterparts. They are worse off than their parents’ generation and they will be left out of home ownership and other opportunities they thought they would have.

Of course Brooklyn and Harlem are less and less Black. Washington DC, once known as Chocolate City, is now more of a cafe au lait city as its Black population is no longer in the majority. The political system offers no solutions. Real estate interests are big political donors, and they decide who will and who will not be in office. Politicians won’t bite the hands that feed them and people who expected to get what they were promised if they played by the rules are left out of contention.

At the very least we can name and shame the bankers and the developers and the craven politicians. They are causing the deaths of communities and the destruction of a people. There should also be no hesitation in naming racism as the culprit of Black peoples problems. Capitalism and racism make one gigantic, two-headed monster behaving as it always has. No one should shrink from pointing out that fact.

Margaret Kimberly is a member of the Green Party of New York.