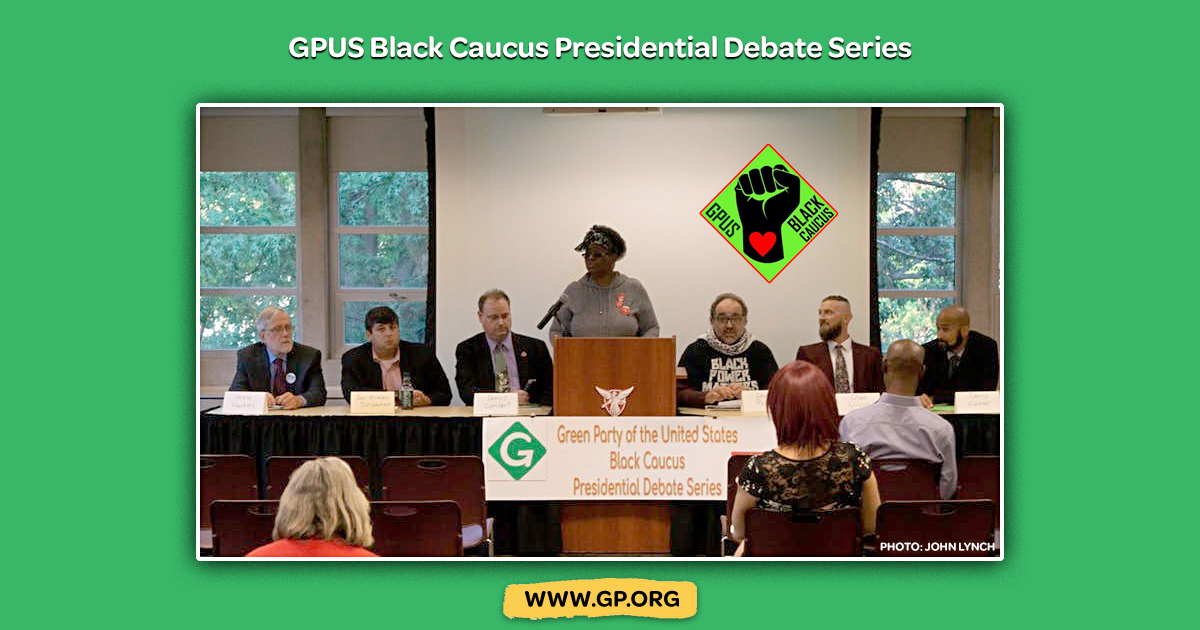 Six candidates seeking the Green Party’s presidential nomination took the stage at the L.A. Pittenger Student Center on Friday night. The candidates were hosted by the Green Party’s Black Caucus to speak on issues relevant to the African American community like social justice, reparations and police brutality.

Muncie City Council candidate Monica James, who organized the forum, encouraged audience members to submit questions and served as the timekeeper for the debate.

The first question on police brutality was met with several variations on a theme of the same ideas.

Hawkins said consent decrees needed to be reinstated in several cities, and the police force needed to be cleaned up, while Wilson and Lambert called for an end to the war on drugs.

Rolde and Schlakman said control of the police force should be placed in the hands of citizens, while Hunter looked at the problem through a legal perspective.

"We have to have strict laws and enforcement for liability to hold law enforcement accountable for their abuses, no more of these nonsense show trials and acquittals," Hunter said. "I've seen it far too many times and through our Department of Justice, we're going to make sure that we hold people accountable."

Candidates addressed socioeconomic inequalities further when they were asked whether single payer healthcare could address the systemic racism of the healthcare system.

"The first wave of reparations should start with the war on drugs, because it's a way to, to find out how people's families and not just the people that are putting in jail for the BS, but the people's families can have some sort of payback too, for the misery that they were caused," Wilson said.

Hunter said that systemic racism in the healthcare system could only be addressed through increased sensitivity in the system and by making the system more accessible to minorities.

"If you don't think that 400 years of oppression by a system that you have no power in has no effect on you, then apparently you're not paying very much attention," Lambert said.

Candidates were also asked how they would address homelessness and equal pay. Rolde said the housing crash of 2008 affected African Americans disproportionately and that reparations for the bailouts that were given to the banks instead of the people were necessary.

Schlakman said the decline of public housing at the hands of Democrats and Republicans alike was a contributing factor in the homeless population, while Hawkins said that universal housing and rent control should be guarantees for the people.

"The rent is too damn high," Hawkins said. "That's why homelessness is rising. The private housing market has never provided affordable housing for low income people."

Gerrymandering and voter suppression were also addressed by the candidates.

Hawkins called for the reinstatement of the preclearance provision of the Voting Rights Act to get rid of photo ID laws and suggested using ranked-choice voting instead of the Electoral College to hold federal elections to remove the power of the two major parties.

Wilson took the opportunity to comment on at Hawkins on what Wilson said was Hawkins' affiliation with the Socialist Party being a disqualifier for being onstage, but the argument was ended by the moderator.

Later, the candidates were asked about a major Green party issue: the environment and combating climate change.

With the goal of cutting carbon emissions, the candidates were asked what role they saw electric vehicles and mass transit having in the future. Most candidates said electric vehicles and mass transit were neglected areas that need bigger investments in the future, which led to the question of whether saving the planet from climate change was still possible.

Though all the candidates agreed that stopping climate change was possible, they differed on how they would go about stopping it.

"Number one polluter in this country is the military," Schlakman said. "If we simply sat down with China and Russia and said 'Our military budget is the biggest. We are going to cap it and shrink it, as long as you do the same, and you do the same,' They would take that deal in a heartbeat."

"This is the 50th year of the anniversary of that assassination and we refer to it is one of our ground zeroes," Njeri said. "They talk about the towers and the buildings that were blowing up and the people murdered, assassinated on September 11, but they don't want to talk about the crimes that have been committed [against African Americans]."