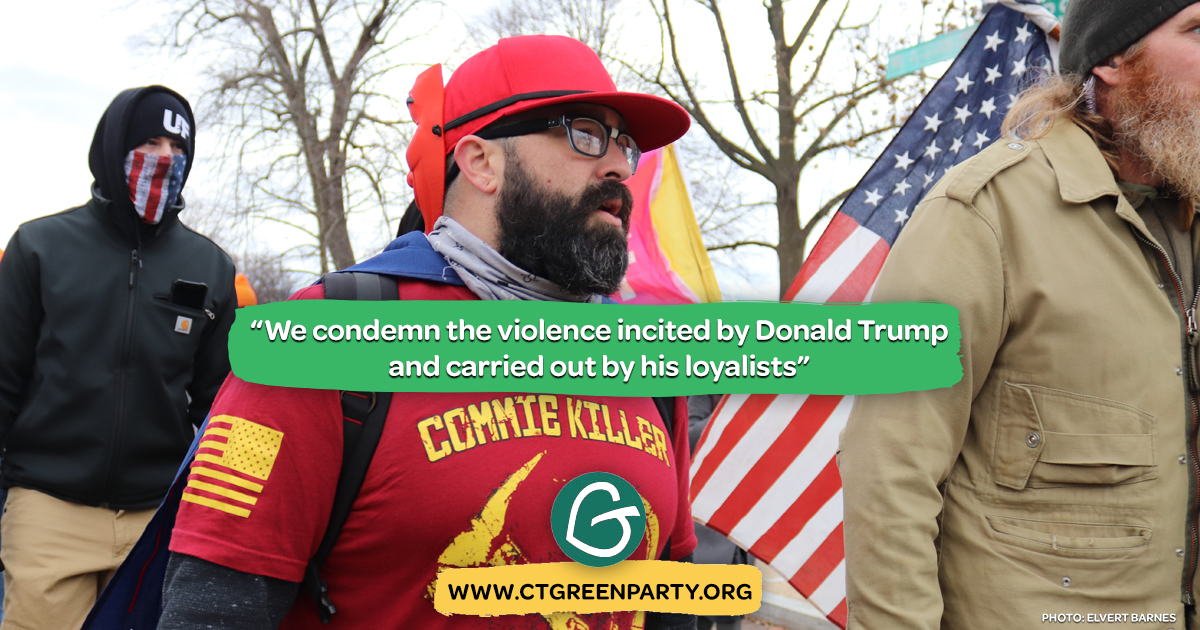 On January 6, 2021, pro-Trump rioters smashed windows, brandished weapons, and forced their way into the Capitol Building in Washington, DC, briefly occupying the building and forcing congresspeople into “secure locations.” Journalists were attacked, police officers were injured, pipe bombs were discovered, and four people died. Police did nothing to prevent the violence and waited hours before dispersing the mob. Pro-Trump organizations declared the day a victory for their fascist agenda.

That same day, at a peaceful counter-demonstration confronting Trump supporters at the Capitol in Hartford, a white woman spat on a Black woman, Keren Prescott, the founder of the racial justice group Power Up Manchester, as she was addressing the crowd. Instead of charging her for a racially-motivated assault, Capitol Police gave her a ticket and sent her home. This incident came after months of protests where white supremacists, posing as “patriotic” friends of law enforcement, used intimidation tactics against racial justice advocates while police looked on and did nothing.

Meanwhile, in Willimantic, Connecticut, elected officials continue to defend the display of the so-called “Blue Lives Matter” flag on the police department website after repeated requests to remove it. Even as this flag is brandished by white nationalists and hate groups as a direct response to Black Lives Matter, officials continue to speciously argue that it “honors” police officers.

These events, in Washington and in Connecticut, are not unconnected. They are the fruit of a society in which the police treat Black children as if they were armed terrorists, and treat armed white supremacists and rioters as if they were children in a playground scuffle. They reflect a system in which white violence – especially when directed against Black and Brown people – is embraced or tolerated. These events cry out for urgent action to restrain right wing intimidation and violence, to acknowledge and renounce the reality of institutional racism, and to begin to dismantle four centuries of white supremacy in American society.

The Green Party of Connecticut condemns the violence incited by Donald Trump and carried out by his loyalists. We demand an investigation of collusion between the police and Trump loyalists, and the prosecution of those found to be responsible for inciting violence.

We express our solidarity and support for Keren Prescott, for Power Up Manchester, and for the many organizations here in Connecticut working to challenge racism and racist violence.

Connecticut state and local governments must reject symbols of white supremacist violence, including the “Blue Lives Matter” flag and the Confederate flag, that have been tolerated by some police departments and politicians. These symbols of racial hatred must not be displayed on government websites, in government offices, or on government vehicles.

These are only first steps, but they are urgently needed. White supremacy cannot be defeated in a day, or by changing one group of politicians for another. Only a restructuring of US. society, including reparations for African Americans and the dismantling of institutional racism can end four hundred years of the oppression of Black and Brown people.

Activists and supporters of Jose Soto held a press conference outside of Manchester Town Hall on Monday to criticize the recently released report about the Jose Soto police shooting. Soto was killed by four members of a regional SWAT team on April 2, and the report from the Tolland State's Attorney cleared all officers of any potential wrongdoing.