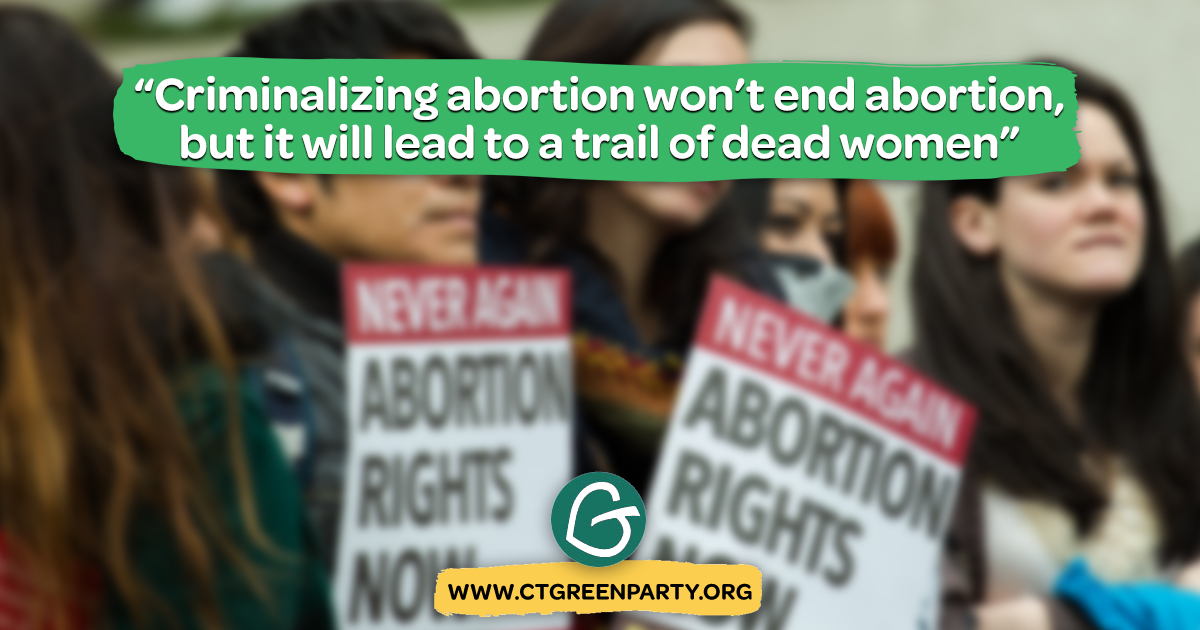 On January 22, 1973, the United States Supreme Court issued a decision in Roe v. Wade, 410 U.S. 113, a groundbreaking case that found - by the authority of United States Constitution - that pregnant women are permitted to have an abortion without state or federal government interference. Less than a generation later, the spirit and application of this law are being challenged, as was revealed when a draft decision overturning Roe v. Wade was leaked to the press on Monday, May 2, 2022.

We, the Green Party of Connecticut, believe in every person’s right to body autonomy, including children, youth and adults. We believe that decisions on comprehensive sexual and reproductive health - of which abortion is a part - are best made in consultation with the licensed medical professional of a person's choice. Overturning Roe v. Wade would undermine the right to individual liberty and medical privacy that the Supreme Court has long held are implied in the Bill of Rights, and would permit further restrictions on reproductive services that would threaten the health and welfare of more than 73 million people of reproductive age across the country. According to Planned Parenthood, limiting access to safe abortion disproportionately affects the rural poor, migrants and non-White ethnic groups - specifically, 5.7 million Latino/Hispanic women, 5.3 million Black women, 1.1 million Asian American women and approximately 340,000 First Nation/American women, respectively. As has been found by Advancing New Studies in Reproductive Health's Turnaway Study, the socioeconomic impacts of being denied an abortion lead to financial hardship that may last four or more years.

Criminalizing abortion won’t end abortion, but it will lead to a trail of dead women, as it did before abortion was legal, especially in working class and poor communities across the United States. We believe that legal protection for the full range of reproductive choices, the repeal of the Hyde Amendment, and securing universal health care including comprehensive reproductive health care for persons across the gender spectrum would solidify a more equitable approach to dismantling systemic health inequities from the ground up.