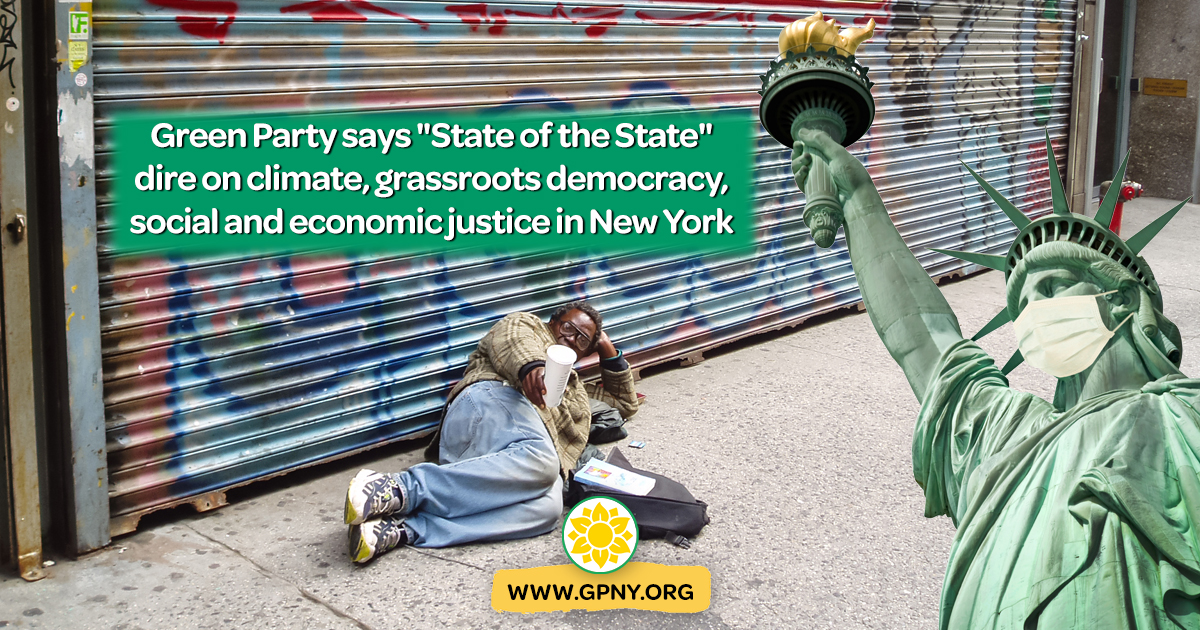 ALBANY, NY – 1/4/22 - Ahead of Governor Hochul's Wednesday State of the State Address, Green Party of New York leaders are putting the Democrats on notice as failing to deliver on the climate emergency, grassroots democracy, and social and economic justice in New York, despite years of state control.

"Real leadership from the governor's mansion would look like helping passage of the New York Health Act by including it in the 2022-23 budget, ensuring single-payer universal healthcare to all New Yorkers," said Green Party of NY Co-Chair Gloria Mattera. "That is the kind of agenda we will set in the 2022 elections with our statewide and state legislature candidates." Green Party officers said they will also make an issue of reforming New York to be the nation's gold standard for ballot access, reversing the draconian restrictions put in place to sabotage smaller parties during Andrew Cuomo's corrupt and abusive administration.

"Democrats have cynically claimed the mantle of 'saviors of democracy' while purging candidates and parties to their left from the ballot," said Green Party of NY Co-Chair Peter LaVenia. "Candidate suppression is a form of voter suppression. Reasonable ballot access for parties, such as 50,000 votes for any statewide candidate in a four-year election cycle or a statewide ballot access petition that can be collected over an extended period, would mean more choices for voters on election day," said LaVenia. The Green Party said, at a minimum, the petitioning requirements for independent statewide candidates should be restored to the previous quota of 15,000 signatures and the period for collection expanded from 42 days to 60 days.

Green Party leaders said a responsible State of the State agenda must also outline immediate action on the climate emergency, which has largely stalled two years after passage of The Climate Leadership and Community Protection Act (CLCPA). Greens want to see $15 billion in funding for climate initiatives in state budgets, a halt on all new fossil fuel infrastructure including the CPV fracked gas plants operating without permits, and the Governor's support for bills that would allow NYPA and local public power systems to build renewable energy projects, and to democratize NYPA's board.

"It is long past time for New York to adopt the Green New Deal our party first proposed in 2010, with a 10-year commitment to move to 100% renewable energy, zero emissions,a public program of guaranteed living wage jobs, guaranteed minimum income, single-payer healthcare, housing, and education that would address a just transition to a renewable and sustainable future," said Mattera.

Greens said they would campaign in 2022 for a fair ballot access law to replace the most restrictive ballot access law in the nation, which was passed under Gov. Cuomo's direction in 2019. The Greens also said they would campaign for ranked-choice voting in statewide elections (executive office, US Senator, President) and for proportional representation in the state legislature through ranked-choice voting in multi-member districts.

On healthcare, Greens said the impending retirement of State Assemblymember Richard Gottfried, champion of the long-overdue NY Health Act, must be a wake-up call for those who want New York to lead the way to single-payer. "The pandemic has exposed the vast inequalities of American healthcare and its link to the workplace," said LaVenia. "The ease with which New Yorkers have had access to state-provided testing and vaccination is a model for how well-funded, universal, single-payer healthcare would work. In addition, it would eliminate the injustices of medical debt and bankruptcies, minimize the cost of healthcare by reducing bureaucracy, and set fair prices for healthcare provision and pharmaceutical prices.

The Green Party will campaign in 2022 on raising taxes on the wealthy and corporations to help fund these needed social and economic programs. Greens have long been proponents of highly progressive income tax brackets like New York had in the 1970s, which would cut taxes for most New Yorkers. They said taxes should be raised on corporations as well, and a stock transfer tax implemented. Greens said that implementation of the New York Health Act would also allow for property tax cuts, since a major portion of local budgets are spent on Medicaid and public employee health insurance, which would be replaced by the single-payer, universal plan.

Finally, Green leaders warned Gov. Hochul to not fail New Yorkers by backing down on criminal justice reforms. They urged her to reject the push by District Attorneys, suburban Democratic lawmakers, and the police to roll back bail reforms, and they said Gov. Hochul should begin a statewide process of providing funding for nonviolent response teams and social workers rather than police as well as ending qualified immunity. They also said that Gov. Hochul should push the Office of Cannabis Management to finalize regulations and start issuing licenses needed to begin supplying, shipping, and selling legal cannabis in 2022, and not delay into 2023.