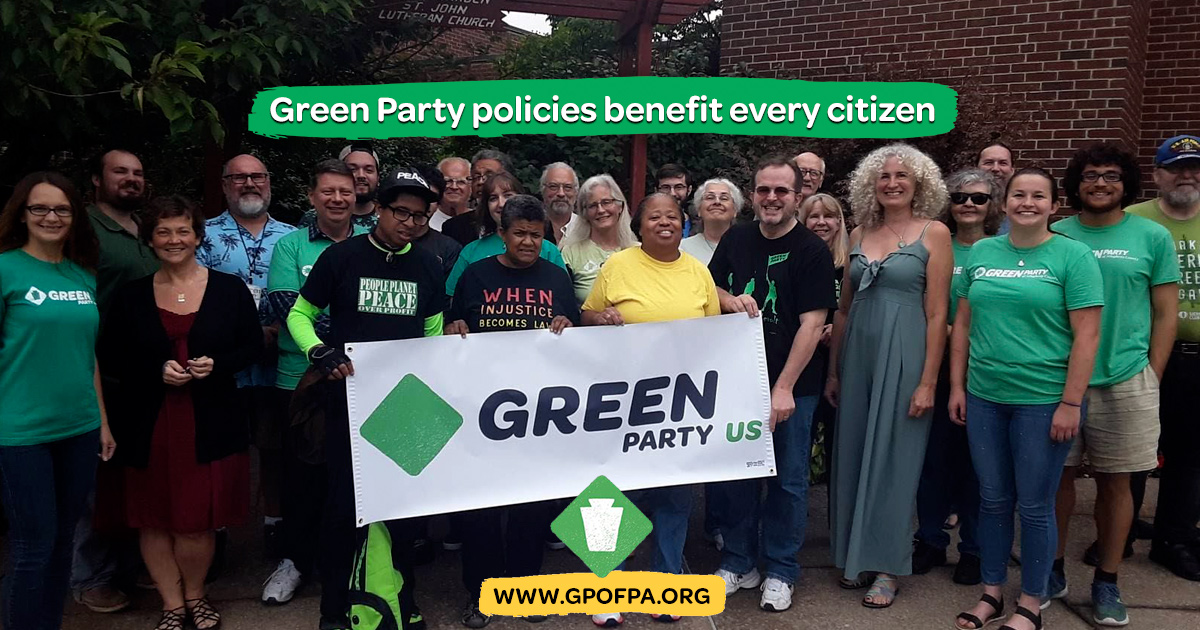 PHILADELPHIA – Two of the greatest strengths of the Green Party of Pennsylvania (GPPA) are the popularity of Green Party policies, and the Green Party’s ability to introduce cutting edge ideas into the political mainstream.  Greens work side by side with citizen activists, frontline communities, and grassroots organizations to generate movements that positively affect policy for the enrichment of our society. Along with their allies, Greens have brought forth some of the most essential and popular programs of our time by using political influence.

Paramount to the survival of people and the planet, the Green Party was instrumental in introducing the Green New Deal into public consciousness. As early as 2010, Green Party candidates were presenting the concept of a Green New Deal to voters. By 2012, the plan was taken to the national level during the presidential election. As Greens continued to spread the urgency of their plan a movement grew behind it. In 2019, a Green New Deal was introduced in the U.S. House of Representatives (H.R. 109), and a majority of voters supported the policy. .

Similarly, other popular programs have been elevated by the Green Party including universal single-payer healthcare, ranked choice voting, overturning the Citizens United decision by the Supreme Court, a ban on fracking, and opposition to U.S. military intervention and imperialism. With a robust platform of progressive policies, the Green Party continues to build support for its Four Pillars of non-violence, ecological wisdom, social justice, and grassroots democracy.

Where partisan powers have built unfair and dangerous institutions, the Green Party has gone to the courts to remove these barriers to democracy. Exorbitant ballot access requirements in PA were dismantled in 2016, when the courts decided in favor of the GPPA’s 2006 U.S. Senate candidate. It was then determined unconstitutional for PA to require minor parties to collect nearly 100,000 petition signatures to obtain access to the PA ballot. The threshold to get on the ballot by ordinary people was therefore lowered.

Additionally, the courts decided that in PA those making a challenge to a candidate’s nomination petition could not levy their court expenses on the defendant. This decision dismissed over $80,000 in fees and penalties placed on the GPPA’s 2006 U.S. Senate candidate. That victory now prevents the practice of using the cost of a ballot challenge as a tool to discourage everyday people from seeking elected office.

Further, other legal wins for democracy have involved the Greens. Such as the PA scandal known as “Bonus Gate,” where state money and resources were illegally used in 2004 and 2006 by the Democratic Party to challenge the nomination petitions of Green Party candidates. More recently, Green Party Presidential Candidate Jill Stein’s 2016 campaign was victorious in forcing the overhaul of PA’s election security infrastructure, requiring a verifiable paper record of votes.

Greens continue to propel progressive policies forward into the mainstream while simultaneously making the government more fair and accountable to the people. Winning elections is just one part of the work which the Green Party must do. They must also register voters who are outside of the two corporate parties. For more information about the GPPA platform and state-wide candidates, please visit www.greenslate2020.org.

To become a member of the Green Party or to volunteer to help Green Party candidates appear on the ballot for the General Election, November 3, please contact your county Green Party. You may also volunteer at green_wave_2020_signup.