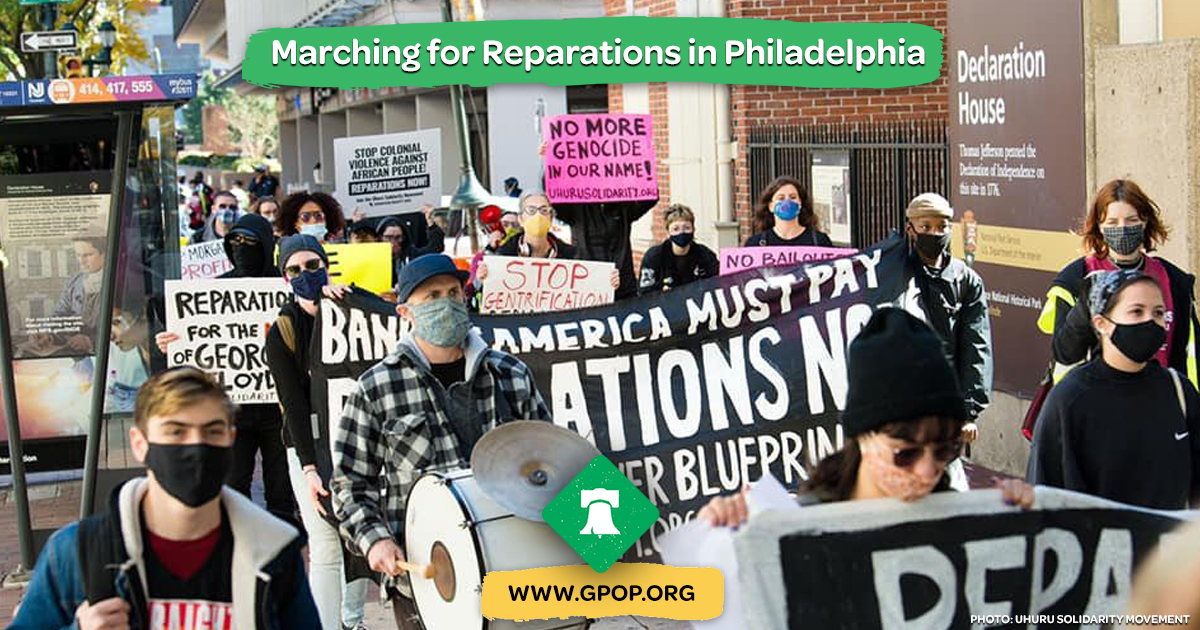 The Green Party of Philadelphia (GPOP) endorsed the March for Reparations on October 16 in Clark Park, University City, Philadelphia. This was not a difficult endorsement because the Green Party holds that the national problem of white supremacy can only be resolved through reparations.

From the Green Party point of view, reparations should be offered to rectify three types of white supremacy: the forced slavery of kidnapped Africans beginning in the colonial era; the resulting violence and discrimination against citizens of color since the formal end of chattel slavery in 1865; and the continuing punishment of people of color by “the ideology of white supremacy which permeates our institutions today.” Those institutions include healthcare, housing, education, finances, law enforcement, employment and food distribution. As a result, the Green Party in 2018 endorsed the call for a National Commission to Study and Develop Reparation Proposals for African-Americans (HR 40).

The March for Reparations on October 16 was sponsored nationally by the Uhuru Solidarity Movement, which held similar events in Oakland, CA; Saint Petersburg, FL; Saint Louis, MO; and Portland, OR. There were five demands made by the marchers:

Chris Robinson, a member of the Green Party of Philadelphia from Ward 29 (Germantown) spoke at the rally following the march. Here is what Robinson said:

Uhuru! And thank you for inviting the Green Party to participate.

I was prepared to give the Green Party's arguments in favor of reparations, but I believe that will not be necessary for your crowd. [Laughter]

Therefore, I will instead make a suggestion to you. Next year, the citizens of Philadelphia will elect 23 people to the PA House of Representatives. The Uhuru Solidarity Movement's demand for reparations and the five local demands of today's March for Reparations may all be found in the Green Party's platform. Therefore, the Uhuru Solidarity Movement should consider asking the Green Party to nominate some of your members for State Representative on the Green Party ballot line. Just think of the publicity for both of our organizations if the mass media began to ask Democratic and Republican Party candidates for their statement about reparations!

"Green Party endorses U.S. House Resolution on Reparations for the Descendants of Africans Enslaved in the U.S.," Green Party of the U.S., February 14, 2018, news release,
https://www.gp.org/greens_endorse_reparations