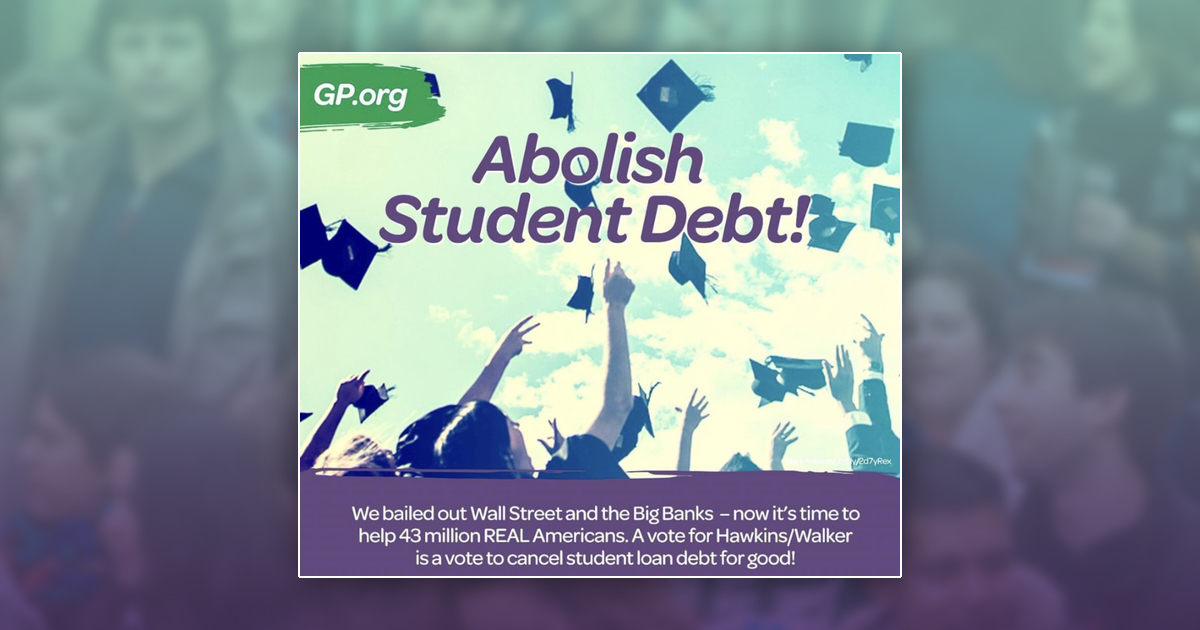 What's the old saying? "First they ignore you, then they laugh at you..."

When Dr. Jill Stein promised to unilaterally abolish student loan debt during her 2016 presidential campaign, the corporate media (including no less than HBO's John Oliver mocked the idea as ridiculous. Now, less than six years later, a sitting president has used executive powers to cancel student debt for millions of Americans.

We can provide no clearer example of why the corporate elite sees the Green Party, and any competition outside of their duopoly cartel, as dangerous. When Greens run for office we advance the real solutions they'd rather ignore. That is why it is critical for you to donate to the Green Party today, so we can fight back against the nationwide campaign to block Green candidates from running and purge us from November ballots.

And in many respects, frankly, Biden’s proposal is racist: The average Black household’s student loan debt is close to 3x that of white households, due a generational wealth divide that can be traced back to slavery and Jim Crow.

Forgiving $10k for white households whose average debt is $12k is functionally bringing most white households out of the red while leaving a massive burden on people of color. We absolutely need universal, full loan forgiveness, the idea Dr. Stein pushed to the national stage, which has since been too popular to ignore.

And even Joe Biden campaigned in 2020 on eliminating all undergraduate federal student debt. So we must remember and we must keep fighting.

If we can afford many billions of dollars for dangerous proxy wars and forgiving the Paycheck Protection Program loans given to rich members of congress, then we can address the historic injustice of student loans that enabled the hyper-inflation of higher education tuition.

We can't afford to let Democrats, Republicans, and the corporate elites they serve silence the Green Party, our candidates and organizers. Please donate today so we can win more relief for those burdened with student loan debt, and justice for others suffering through many other crises in this time.

In Solidarity,
Green Party of the United States
http://www.gp.org/

P.S. Did you know you can subscribe to support the Green Party, just like you can for your favorite podcasts, subscription box, or meal kit? Go to gp.org to safely and securely sign up to make Grassroots Democracy a monthly priority!