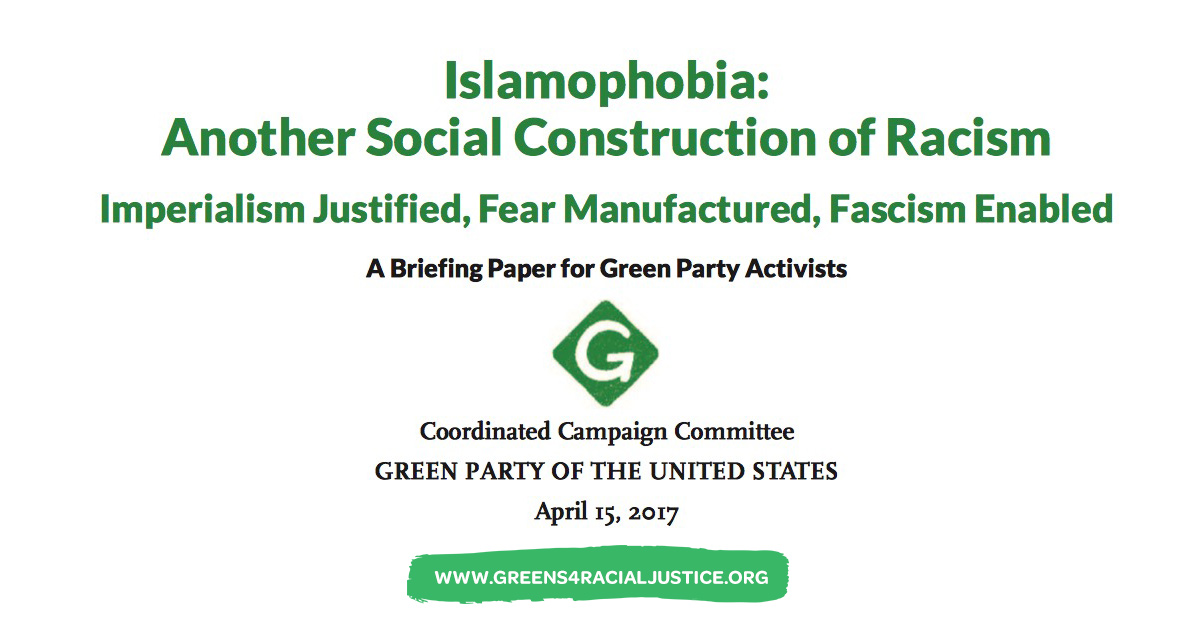 WASHINGTON, D.C. -- The Green Party's Coordinated Campaign Committee has released a briefing paper titled "Islamophobia: Another Social Construction of Racism". The paper is a guide for use by Green candidates and activists.

"We are very pleased indeed to offer this new tool for Green Party candidates and activists," said Hillary Kane, co-chair of the committee. "We want to help Green Party activists be effective organizers in resistance to the frightening Islamophobic rhetoric and policies coming from the current administration."

The paper debunks and deconstructs misinformation in the popular narrative about Muslims and Islam and suggests concrete steps which Green candidates and activists across the nation can take to defend human rights and freedoms against unconstitutional encroachment.

"It is great that the Green Party is tackling Islamophobia head on by using this paper as a tool to debunk many myths and misconceptions that have plagued so many political party organizations," said Farheen Hakeem, former co-chair of the Green Party of the United States and the first Muslim leader of a national party with FEC recognition in U.S. history.

"It's important for folks to read and understand this paper as we enter a time period where Muslims are targeted perhaps more than any other group. Post Trump America is more frightening than post 9/11 America for Muslims," said Ahmed Eltouny, second vice chair of the Green Party of New Jersey and alternative delegate to the party's National Committee.

The paper is a collaboration between two veteran Green Party organizers. George Friday is former co-chair of the Green Party of North Carolina, a board member of Move to Amend, a life-long organizer, and long time anti-racism trainer. Hugh Esco is current co-chair of the Georgia Green Party and a two-time candidate for Lieutenant Governor of Georgia.

Mr. Esco initiated the project when anti-Muslim rhetoric was on display during the 2016 presidential election. The paper is built on extensive research on Islam and deals with the bigoted response to it by reactionary political forces in the U.S. and western Europe.

The paper synthesizes research documented in nearly a hundred citations from ten books, including the Quran, 39 articles from nearly as many periodicals, eleven academic studies by government agencies, advocacy organizations, and scholars. It incorporates feedback on late drafts from a handful of Muslims, many of them Green Party voters, supporters, and members, who address Islamophobic attacks on a daily basis.

"This nation has a long history of demogogic political rhetoric. It is a tired old tactic to appeal to voter fears and ignorance which unfortunately still seems effective at winning elections," said Mr. Esco.

"Those in power have repeatedly appealed to this nation's racism to divide working people and to maintain control of the wealth our labor provides," said George Friday. "We hope this research will help Green Party activists across the country interrupt the hateful narrative and the spectrum of violence it enables."

The 13-page briefing paper is available for download from the Green Party's website along with a trifold brochure summarizing its findings. The trifold was introduced at a book signing held in Atlanta, Georgia, on March 31 featuring Arun Kundnani, author of a history entitled "The Muslims are Coming: Islamophobia, Extremism and the Domestic War on Terror," a work cited four times in the briefing paper. A video of Dr. Kundnani's talk is embedded at this website, operated by the Party's Coordinated Campaign Committee, which hosts the briefing paper and summary brochure as well.

The paper summarizes research on a $200 million industry of propaganda designed to demonize people based on their faith.

"As the Quran puts it, we should enjoin what is right and forbid what is wrong, but all scriptures for all faiths would agree on that," said Hugh Esco. "If we are to end war and live in peace with our Muslim neighbors, both domestically and globally, we as Greens must embrace our role in challenging the Islamophobia and other forms of racism used to justify our nations violent policies."