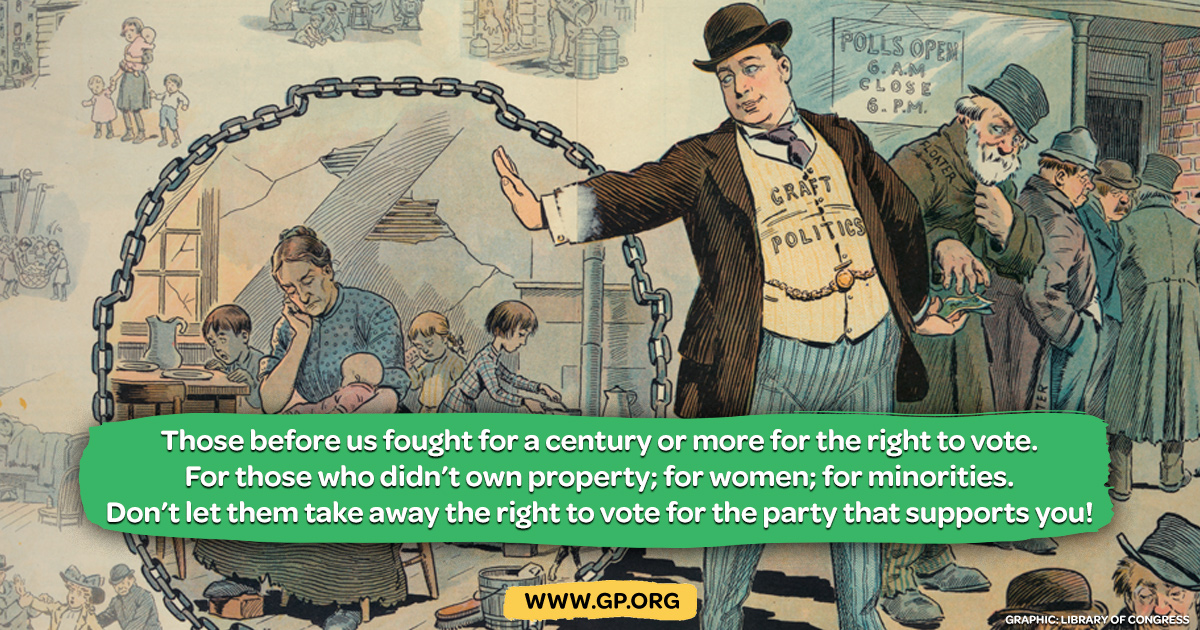 WASHINGTON, DC – The Green Party has launched an initiative to get ballot lines for all 50 states and DC and the U.S. territories in 2020. Green Party leaders said that increasingly restrictive ballot requirements were setting the stage in an attempt to eliminate all competition against the Democratic and Republican candidates in the 2020 presidential election.

Greens said that voters deserve the right to vote on a ballot that gives them a choice of more than two candidates on Election Day and that limiting the choice to two is a severe blow to fair and open democratic elections.

“An overwhelming majority of citizens support the building of a new major political party, and more choices on their November ballot,” said Brendan Phillips, co-chair of the Green Party Ballot Access Committee. “Unfortunately, in most states, the two major parties have created terribly restrictive ballot access laws designed specifically to keep third parties and independent candidates off the ballot, furthering the two-party stranglehold.”

“Restrictive ballot access laws severely limit voter choice and democratic participation. The Green Party of the United States calls for reasonable ballot access thresholds and debate requirements, both of which would help to provide a more informed and participatory electorate,” said Phillips.

The Republican-led legislature in Arizona recently shortened the time allowed for collecting signatures to get on the ballot, and a commission established by the Democratic governor and Democrat-led legislature in New York just proposed raising the ballot access threshold to more than double the original threshold of 50,000 votes and tripling the amount of signatures required for independent candidates to get on the ballot. The Green Party of Texas is party to a lawsuit targeting unconstitutional ballot restrictions.

On October 1, 2019, the Arizona Green Party lost its ballot status by failing to raise Green Party registration to above two-thirds of 1% of the total registered voters in Arizona, which translates to 25,839 registered Green voters. Then, on November 29, 2019, the Green Party requested to be recognized as a new party according to Arizona Revised Statute 16-802; however, they failed to collect 31,686 petition signatures after a shorter petition period was instituted. As a result of Senate Bill 1154, passed on May 22, 2019, the Arizona primary date was moved from August 20, 2020 back to August 4, 2020. The bill also added an additional 70 days to petition gathering deadlines by stating that new party recognition petitions need to be turned in 250 days, instead of 180 days, in advance of the Arizona primary date. The Republican-led legislature moved up the deadline for filing the signatures by a total of 86 days, from February 2020 to late November 2019. Possible options for ballot access in 2020 include filing a petition lawsuit for an extension placement on the ballot, filing an independent petition, or filing for write-in status.

The Illinois Green Party lost its ballot status in 2010 when Rich Whitney received less than the 5% threshold in the governor’s race. There was an error on the early-voting ballots on Chicago’s South Side where Whitney’s name was misspelled as “Rich Whitey.” In 2006, Whitney got over 10%, gaining the ILGP ballot access for the first and only time in their 20-year history. Despite the loss, the party plans to get 2020 candidates on the ballot with a party petition. For the presidential and senate candidates, 25,000 valid signatures in 90 days are required.

“There is one thing that the Democrats and Republicans will work together on, keeping a third party off the ballot,” said Gini Lester, Illinois Green Party membership steward. “Predictably, after there is a third-party gain, the rules are changed to make getting on the ballot harder the next time.”

For a Green Party presidential candidate to qualify for ballot access as an independent candidate in Indiana, they must collect approximately 45,000 valid signatures by June 30, 2020 (2 percent of the total votes cast for Indiana Secretary of State in 2018).

“Indiana's ballot access laws are among the most restrictive in the country,” said George Wolfe, Indiana Green Party co-chair. “Senator Greg Walker, a Republican state senator from Columbus Indiana, has been proposing legislation to make ballot access fair for third-party and independent candidates. His legislative efforts failed to pass the state senate during the last legislative session.”

“This initiative however, would benefit if it were combined with legislation supporting ranked choice voting. Recently instituted in the state of Maine, ranked choice voting eliminates the 'spoiler effect' many Democrats and Republicans fear result from Libertarian, Green Party and independent candidates. Our chances of equalizing ballot access in Indiana, and other states as well, would significantly improve if ranked choice voting would become part of the Indiana election process,” added Wolfe.

On Nov. 25, the Democrat-appointed New York State Public Campaign Financing Commission voted to raise ballot access thresholds to 130,000 votes or 2% of the vote (whichever is greater) in gubernatorial or presidential elections every two years. The previous threshold was 50,000 in the gubernatorial election every four years. In addition, the commission voted to triple the number of petition signatures required for ballot access for an independent nominating petition for a statewide candidate from 15,000 to 45,000. The commission’s recommendations will become law at the end of the year unless the Democrat-controlled state legislature holds a special session to amend or kill the bill, which appears unlikely. A court hearing was held on Dec. 12 on a lawsuit filed by two third parties to declare the Commission an illegal delegation of legislative authority. The Greens and Libertarians have announced they will sue to challenge the legality of the changes to the ballot access laws.

“New York's efforts to suppress democracy, kill third parties and restrict voters' choices is being done entirely by the Democrats who are in complete control of state government,” said Mark Dunlea, 2018 candidate for New York State Comptroller. “Many of the initiatives that Democrats in New York take credit for were in fact first proposed by the Green Party. And when they win control of both houses of the legislature, they balk on issues like single-payer health care and marijuana legalization.”

The Ohio Green Party lost its ballot status in 2018 when the party’s candidate for governor, Constance Gadell-Newton, failed to capture 3% of the vote in the midterm election. The ballot access had been previously secured by Anita Rios, who won 3.3% of the vote in 2014 after the Green Party won a 2010 lawsuit against the state.

“At what point do we stop the charade that this is a democracy?” said Anita Rios, GPUS Steering Committee Member. “Regardless of the arbitrary unfair ballot access laws that Ohio's shamefully corrupt legislature puts in place, the Ohio Green Party will continue to run candidates and seek to regain ballot status.”

A group of parties, including the Libertarian and Green parties, are suing Texas, alleging that the state’s rules gaining ballot access are unconstitutional. Texas requires independent or third parties to hold a convention with attendance equal to 1 percent of the votes cast for governor in the last election. If the party fails to meet that requirement they must launch a petition drive or pay a filing fee. In 2020, the petition requirement will be more than 83,000 signatures. A Texas district court just issued an injunction on the filing fee on constitutional grounds, particularly the right to freedom of association.

Banner Graphic Credits
courtesy of the Library of Congress

Illustration shows a man labeled "Graft Politics" paying, with his left hand, a tramp labeled "Floater" at the end of a line of tramps outside a polling place, while with his right hand he attempts to stop a woman from speaking out for women's suffrage; vignette scenes show women working in sweatshops, children taking care of younger children, living in tenement housing, working in factories, and being arrested.