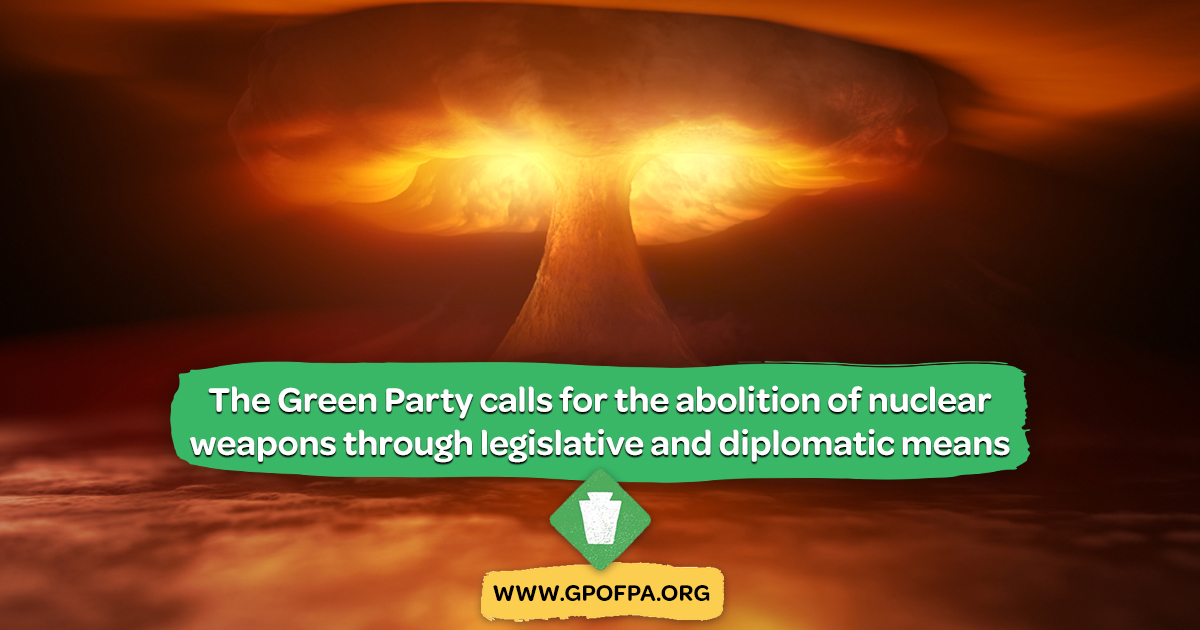 PHILADELPHIA – On January 22, the UN Treaty on the Prohibition of Nuclear Weapons (TPNW) will go into effect after ratification by 53 nations and with the support of 599 peace organizations, including the Green Party of the United States (GPUS). The Treaty will make it illegal for any nation to develop, test, manufacture, transfer, possess, stockpile, use or threaten to use nuclear weapons. It will also prohibit any nation from allowing nuclear weapons to be stationed on its territory.

At the present time, there are 13,400 nuclear warheads threatening the world’s population (5,800 by the U.S.). The U.S. is the only country to have used nuclear weapons in war. In the final days of World War II, it detonated two atomic bombs over the Japanese cities of Hiroshima and Nagasaki, killing more than 200,000 people. Many thousands more died in the years following the attacks from illnesses caused by their exposure to radiation from the bombs. Almost all of the victims were civilians.

The Green Party’s Peace Action Committee (GPAX) on July 6, 2020, endorsed the Green Party World Peace Platform, which says, in part, “The Green Party calls for the abolition of nuclear weapons through legislative and diplomatic means. Until that goal can be accomplished, our government must adopt a no-first-strike policy and no-preemptive strike policy. Our government must abide by all nuclear arms control treaties that limit proliferation, improve safeguards, and reduce sizes of nuclear arsenals leading to elimination, such as the Treaty on the Prohibition of Nuclear Weapons (TPNW) . . . . Our government must honor its commitments to end the research, testing and stockpiling of all nuclear weapons of any size; and dismantle all nuclear warheads from their missiles.”

On August 6, 2020, the 75th anniversary of the U.S. bombing of Hiroshima, Japan, Green Party candidate for President, Howie Hawkins, wrote, “Very few Americans know about [the TPNW] because none of the leaders of the Democratic and Republican parties and none of their presidential or senatorial candidates are addressing this crisis. None of them oppose [Obama’s] nuclear modernization program. None have proposals to reverse the new nuclear arms race. None have objected to the use of nuclear weapons in U.S. foreign and military policy. Every time U.S. leaders say, ‘All options are on the table,’ the threat of a nuclear strike is implied. . . . Voting for the lesser evils among these candidates is still voting for the nuclear arms race and endless wars. Voting Green is voting for peace initiatives that offer a way out of this march toward nuclear doomsday.”

Chris Robinson (Philadelphia), a Green Party member, said, “I am so glad that TPNW will finally go into force. I became an activist for peace during the 1960s when I refused to participate in the nuclear bomb drills held in Philadelphia’s public schools. As soon as I learned about a new peace party being formed, I joined the Green Party because of its anti-militarism platform. Now, I am a Green Party representative to Divest Philly from the War Machine, which is working to have the Philadelphia Pension Fund divest from investments in nuclear weapons.”

Events in Celebration of TPNW Entry into Force

Justin Bell, a member of the City Committee of the Green Party of Philadelphia, said, “Greens of Philadelphia, even though Trump is out, we know there is no time for rest. A Democratic war hawk and a Republican war hawk are all the same to us. Joe Biden was a leader in the push for the war in Iraq. The time is now to create a movement across the globe that is anti-nuclear weaponry. We can do our part by showing up at the Federal Building, 6th & Arch Streets, at noon on 1/22, the day the TPNW goes into effect. We need a mass gathering to show our legislators that the people support this measure. If we come out in force, it will prompt political leaders to make more of an effort when drafting laws to include anti-war measures.”

Divest Philly from the War Machine, World Beyond War,
https://worldbeyondwar.org/divestphilly/;