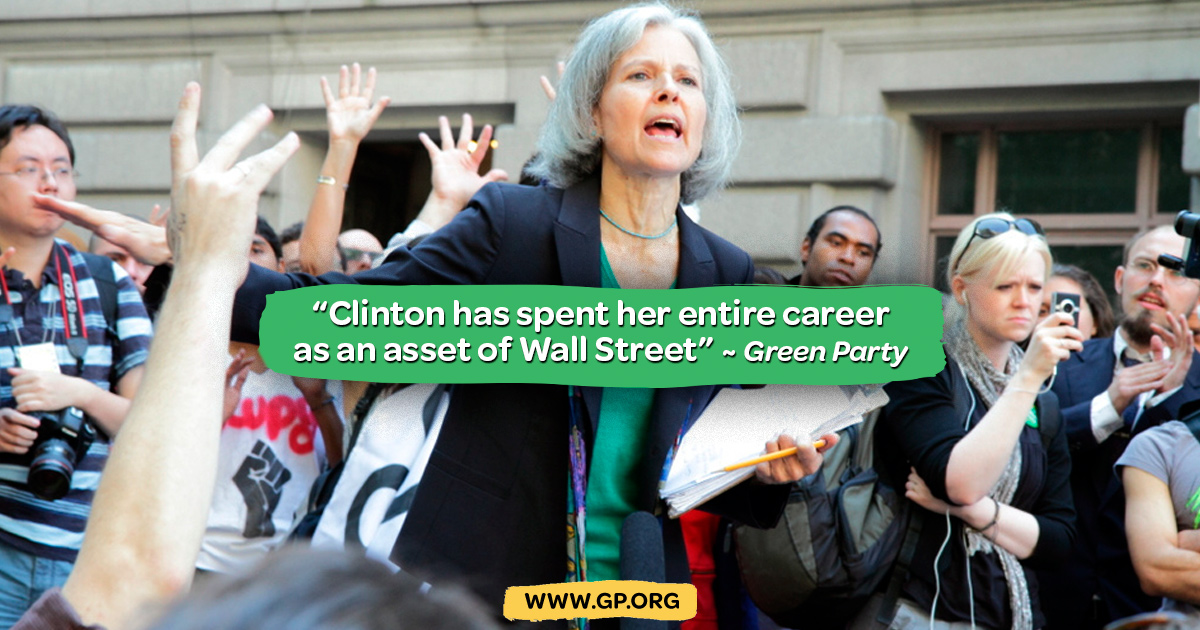 “Brazen Orwellian doublespeak” — that’s what the Green Party is saying in response to Hillary Clinton’s accusation that their 2016 candidate, Dr. Jill Stein, is “totally” a “Russian asset.”

“Clinton has spent her entire career as an asset of Wall Street, the police state and war — the real dangers to everyday people in the United States and around the world,” Green Party communications manager Michael O’Neil said in a statement to Rolling Stone on Friday.

Clinton, the erstwhile Democratic nominee in 2016, sat down for an interview with former Obama campaign manager David Plouffe earlier this week. Over the course of an hour-long discussion, the former Secretary of State speculated that American antagonists would attempt to influence the 2020 election, as they did in 2016.

She suggested the Democratic Rep. Tulsi Gabbard might be the recipient — witting or not — of help from the Kremlin this time around. (At the Democratic debate on Tuesday, Gabbard called allegations that her candidacy is being boosted by the Russian government “completely despicable.”) Clinton said she wouldn’t be surprised if Gabbard, failing to secure the Democratic nomination, mounted a third party challenge in 2020.

“I’m not making any predictions, but I think they’ve got their eye on someone who’s currently in the Democratic primary and are grooming her to be the third-party candidate,” Clinton said. “She’s the favorite of the Russians. They have a bunch of sites and bots and other ways of supporting her so far.” Gabbard responded on Twitter, with her own allegation: that Clinton has been behind a shadow campaign to sabotage her candidacy.

In her conversation with Plouffe, Clinton went on to declare that Stein — her opponent in 2016 — acted as an agent of the Russians. “And that’s assuming Jill Stein will give it up, which she might not because she’s also a Russian asset. Yeah, she’s a Russian asset — I mean, totally.”

Clinton added: “They know they can’t win without a third-party candidate. So I don’t know who it’s going to be, but I will guarantee you they will have a vigorous third-party challenge in the key states that they most needed.”

O’Neil, speaking on behalf of the Green Party, rejected Clinton’s logic Friday. “Clinton says ‘they can’t win again without a third party candidate’ when the reality is the Democrats and Republican’s cartel-like suppression of third parties and real democratic reforms like ranked choice voting and proportional representation corroded our politics to the point where a crooked, white supremacist, misogynist, fame-obsessed huckster like Donald Trump could connive his way into the White House.”

He went on to note that many of policies Democrats are debating this year, from the Green New Deal to Medicare-For-All, were first championed by the Greens, and to highlight Stein’s ongoing fight against receipt-less voting machines in Pennsylvania.

“While Clinton would love to intimidate Green Party candidates and voters with baseless smears, her salty neo-McCarthyism will prove to be rocket fuel for the motivation of Greens everywhere in 2020 and beyond,” O’Neil said.

Clinton’s spokesman, meanwhile, doubled down on the characterization to CNN on Friday.  “If the nesting doll fits, ” Nick Merrill said. “This is not some outlandish claim. This is reality.”