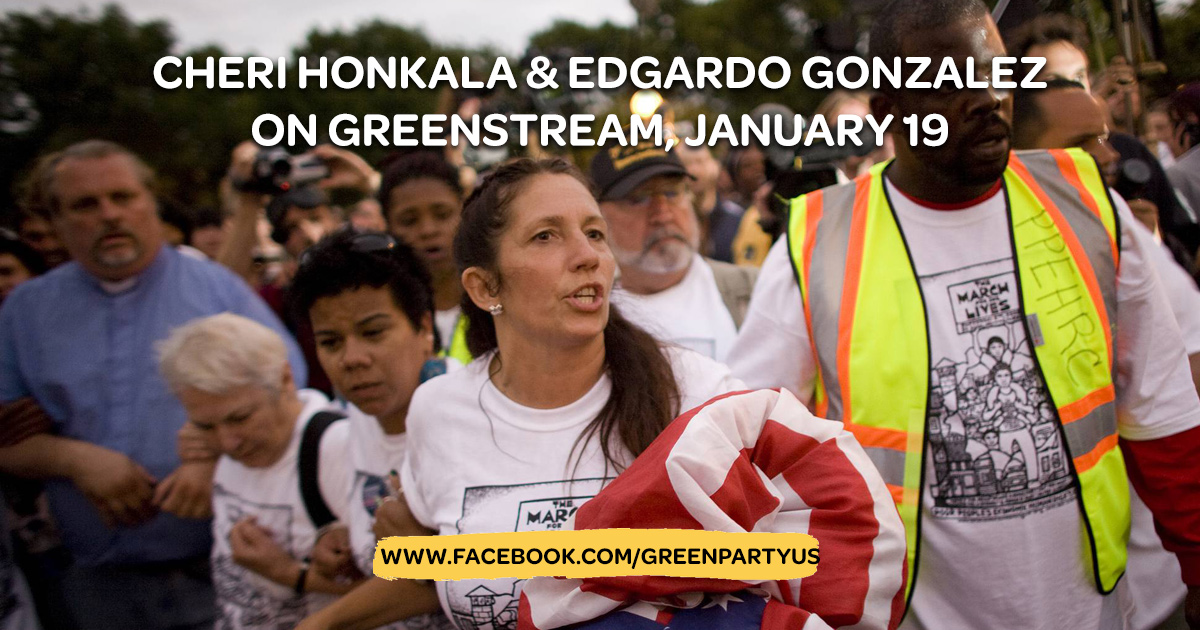 WASHINGTON, D.C. -- The next broadcast of GreenStream, the Green Party's livestream show, will feature an interview with Cheri Honkala, founder and leader of Poor People's Economic Human Rights Campaign and Green Party vice-presidential nominee in 2012.

Edgardo Gonzalez will interview Ms. Honkala, who was the Green Party's V.P. nominee in 2012

Edgardo Gonzalez, a well-known community activist who works with civic, cultural, and political groups in the Philadelphia area, will interview Ms. Honkala. Technical producer for the show will be Craig Seeman.

Cheri Honkala was the Green Party's candidate for Pennsylvania state representative in Philadelphia's 197th District in a 2017 special election marred by numerous irregularities. Ms. Honkala is a plaintiff in a legal action targeting election fraud in her district. Pennsylvania Attorney General Josh Shapiro has filed charges against an entire election board in Philadelphia for election improprieties.

Poor People's Economic Human Rights Campaign is commemorating the 50th anniversary of the Poor People's Campaign and Poor Peoples March, launched in 1968 by Dr. Martin Luther King, Jr., with several events in 2018 including a march to Washington, D.C., in June.

Edgardo Gonzalez is a native of Puerto Rico and has lived in Philadelphia for over 30 years.  He is the board chair of Taller Puertorriqueño, the oldest and largest Latino arts and culture organization in Pennsylvania.  He is a graduate from Jefferson University with a Bachelor of Science. He served as chairperson for Ms. Honkala's campaign for state representative in the 197th District.

More GreenStream broadcasts and Green Party videos can be viewed on the party's video page.