Growing up black in America: here's my story of everyday racism 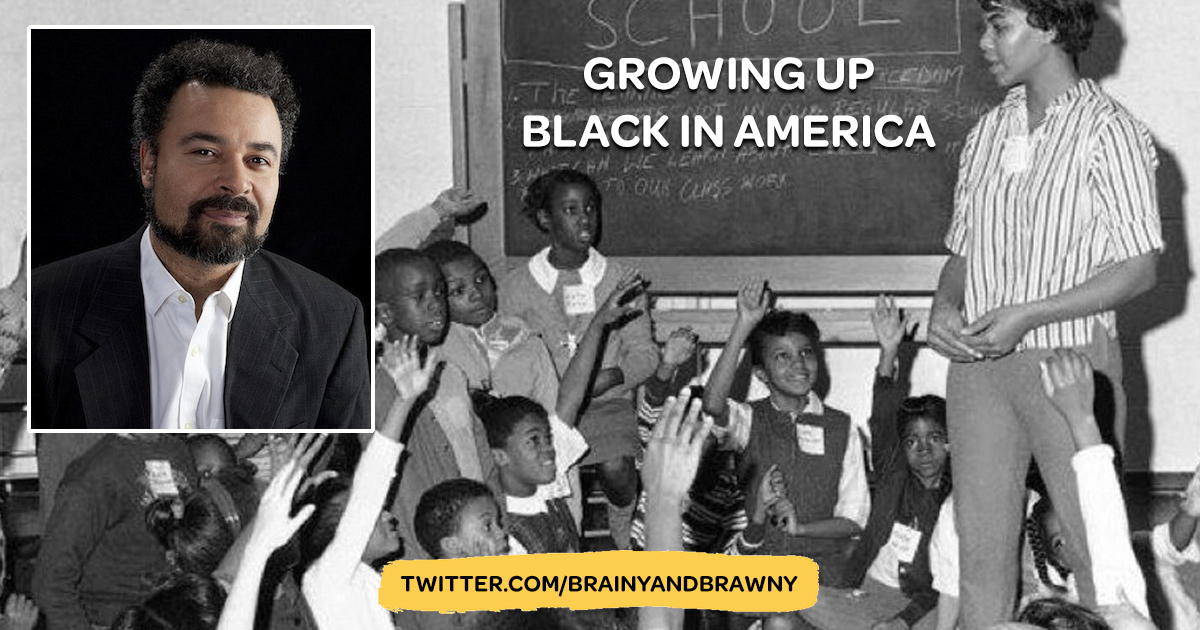 As a middle-class, light-skinned black man I am ‘better’ by American standards but there is no amount of assimilation that can shield you from racism in the US

I am a black man who has grown up in the United States. I know what it is like to feel the sting of discrimination. As a middle-class, light-skinned black man I also know that many others suffered (and continue to suffer) a lot worse than me. I grew up around a lot of white people. In elementary school, I remember being told that I was one of the “good ones” – not like the “bad ones” I was meant to understand; I was different.

I remember the way this kind of backhanded compliment stung me, but it took me a long time to understand why it hurt. In truth, though, the comment rings true. I am “good” by America’s standards, or at least “better”: my skin is light, most of the time I dress like a middle-class professional and my manner of speech betrays a large degree of assimilation in the white American mainstream (for example, I use phrases like “manner of speech”).

But as many others have learned, there is no amount of assimilation that can shield you from racism in this country. Throughout my life, something – the kink of my hair or my “attitude” – would mark me as inferior, worthy of ridicule, humiliation or ostracism. In elementary school I got the distinct impression that teachers didn’t like me. I got in trouble a lot, and one teacher actually wrote on my report card that I was “amoral”. In third grade, I had my first black teacher and the whole dynamic changed. Mrs Brooks decided it was OK if I squirmed in my chair. She taught us about discrimination and injustice and taught us to recite and interpret poetry from the black arts movement. (Thank you, Mrs Brooks!)

As I got older, I observed that my mother saw racism around every corner. She assumed that I would be the object of discrimination in school and maintained an intense, vigilant determination to protect me from it. She monitored everything about my treatment in school, ready to leap at the slightest slight. Sometimes I thought she went too far. I wasn’t chosen to give a speech to my middle school’s assembly, and so she inquired as to why I wasn’t chosen, and she insisted that I be given a shot. So, thanks to my mother raising a fuss I had to give a speech to my entire middle school. (Thank you, mom!)

In high school I started wondering, as teenagers do, how people go about finding romantic partners. From what I could tell in movies and television shows – my principal sources of information – you had to be a rich and white to be worthy of love. I was neither, so I was worried. Like many young black people, I internalized the idea that I would have be twice as good to get half as much respect. Much to my dismay, my blackness seemed to be the salient thing about me. One of my classmates had a gift for inventing creative ways to make fun of my kinky hair, and he got enough people laughing to send me home in tears for a good part of my freshman and sophomore years of high school.

One year, one of the few black students at my high school found a noose hanging in his locker one day. The culprit – a white student – was quickly discovered, and all he had to do to get out of trouble was issue a lame apology. I thought his punishment should have been more severe. I convinced my best friend to wear black armbands in school to protest. This act earned me no greater respect, and actually greater ridicule. Several of our teachers thought it was funny and even prompted our classmates to laugh at our expense: “Look at Jones,” one teacher said, “starting a revolution.” (Thank you, Mr I forget-your-name!)

Looking back, I realize that, apart from my black armband episode, my survival strategy was to make myself as non-threatening as possible. I became so well-practiced in the art of not offending racist white people that I ceased to become outraged by them, at least when they affected me directly. I knew how to enter a store, to make eye contact with someone who worked there, to smile and say hello as if to say: “Don’t worry, I’m not trying to steal anything.” Somehow – I suppose from being followed in stores frequently – I learned not to carry books into a bookstore, not to walk through a store with bags that were not sealed or zippered shut, and so on.

Now that I’m older, with a graying beard and significantly less hair on my head, I probably don’t need to keep up this routine, as I’m probably the cause of less suspicion, but the habit has stayed with me. While shopping, I still assume that I am suspect. I am a middle-aged man, and yet I still habitually enter the grocery store, the book store, the clothing store, etc looking for the first opportunity to reassure the employees that I’m not going to be a problem.

At some point, I figured out (at least, intellectually) that it doesn’t matter how “good” I am – my fate is bound up with all of those who are “bad”. There was a moment in my adulthood when I decided that the present order is intolerable and a new world is both possible and necessary. In the grand scheme of things, my experiences of everyday racism are not that important. I am neither the most privileged nor most oppressed. I know that there are people of all stripes who are trying to survive on this planet with fewer resources than I have.

I am consistently inspired by the words of the early 20th-century socialist Eugene V Debs (a white guy!) who famously told a judge, after being convicted of sedition: “Your Honor, years ago I recognized my kinship with all living beings, and I made up my mind that I was not one bit better than the meanest on earth. I said then, and I say now, that while there is a lower class, I am in it, and while there is a criminal element, I am of it, and while there is a soul in prison, I am not free.”

I am also inspired by the words of Malcolm X, who summarized the goals of the black movement as: “Human rights! Respect as human beings! That’s what American black masses want. That’s the true problem. The black masses want to not be shrunk from as though they are plague-ridden. They want not to be walled up in slums, in the ghettoes, like animals. They want to live in an open, free society where they can walk with their heads up, like men and women!”

Growing up in this country, my experience with everyday racism, although unique to my class and complexion, has nevertheless given me some access to the “second sight” that is a crucial part of black people’s gift to the world. To paraphrase WEB Du Bois, I believe that black history has a message for humanity. That message, to paraphrase activist Alicia Garza, is that the kind of equality black people need to be free is the kind of equality that will make everyone else free.

I write this as a black person who also knows the white American world. There is ignorance and prejudice there, but there is also pain, suffering and struggle. I am grateful to my parents and teachers who helped me to notice and name racism and discrimination. They have helped me to understand my personal experience and, just as importantly, to see beyond it. I have become convinced that black liberation is bound up with true human liberation. Look at me, with any luck, starting a revolution.

Brian Jones is an educator and activist in New York. He is the associate director of education at the Schomburg Center for Research in Black Culture. In 2014 Jones was the Lt Governor candidate of the Green Party of New York.