Pinellas Greens Statement On Clearwater Racist Murder: "Gualtieri, Get The Hell Out Of Pinellas!" 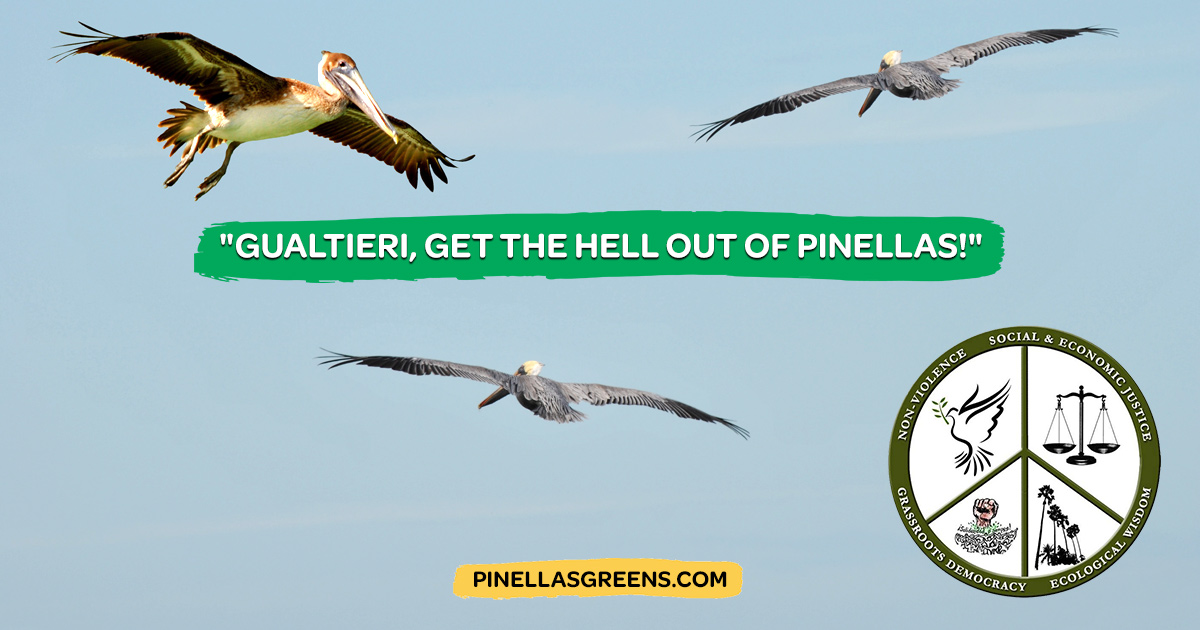 Those aren't the facts ("He had to shoot") and that's not even the law (you can't claim fear for your life in a confrontation that you deliberately provoked).

This is Florida and this is Bob Gualtieri, whose gang of killer deputies have a rep for chasing Black youth to their deaths as in the 2016 case of the "Three Drowned Black Girls" and the case of three Black teens chased to their burning deaths in 2017. But the times they are a'changing.

"The assailant has to be prosecuted for murder," demands Reverend Bruce Wright, a human rights activist and co-chair of the Pinellas County Green Party. "And Stand Your Ground has to be repealed. No more excusing and no more stonewalling. The rotten team of Bob Gualtierri and District Attorney Bernie McCabe should be forced to resign immediately. The clock is ticking."

Gualtieri recently made the national spotlight as mouthpiece for Immigration and Customs Enforcement (ICE), the agency which made headlines for locking immigrant children in cages, and for its troopers raiding public buses and demanding, "Show me your papers!" ICE and the MCSA developed a policy that "aliens held by [local] jurisdictions are held under the color of federal authority, thereby affording local law enforcement liability protection," allowing immigrants to be held indefinitely until ICE can process them.

Gualtieri bragged that the "Basic Ordering Agreement model being unveiled today is the linchpin in allowing us to faithfully execute our public safety duties."

But as former 2016 sheriff candidate James McLynas (endorsed by the Pinellas County Green Party) reported in Burning Spear, "It is no secret that the black community at large is no fan of Sheriff Gualtieri. Based on his extremely racist policies, his public statements blaming the black community for virtually all of the crime in Pinellas County, targeting blacks for aggressive 'stop and frisk' enforcement and claiming that all of the blacks killed by his Deputies basically 'deserved it' even when they are shot in the back, I can easily see why."

"In fact, the St. Petersburg Black community is no fan of the entire Pinellas County Sheriff's Department," adds Rose Roby, the other co-chair of the Pinellas Green Party. "Following the 'unrest' after the 1996 rebellion over the cold-blooded murder of TyRon Lewis, and the military siege of Uhuru House, a Black man, Goliath Davis was appointed St. Petersburg police chief in 1997. Davis actually banned the Pinellas County Sheriff's Department from patrolling the city. And during those eight years, not a single Black man was shot down by a police officer in all of St. Pete.

"Goliath Davis didn't go far enough. It's not enough to tell the Sheriff's Department to get out of St. Petersburg. We need to tell them to get the hell out of Pinellas County. We need to stand in solidarity with Communities United for Reparations and Economic Development, and demand Black Community Control of the Police. Read the papers. We're not just seeing a collection of isolated racial murders. We're seeing a wave of violence across the whole United States of America, targeting our Black and Latino communities, from the violence of gunfire to the just-as-deadly violence of Gentrification."