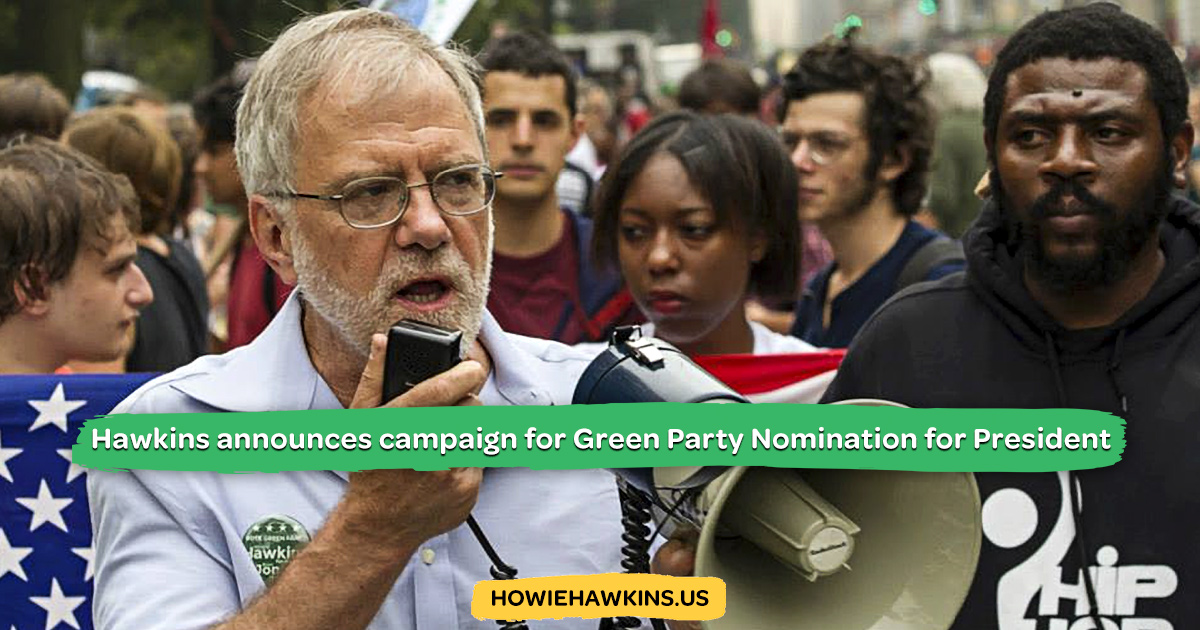 Howie Hawkins announced in Brooklyn today that he is seeking the Green Party nomination for president.

Hawkins was a co-founder of the Green Party in 1984 and the first US candidate to campaign for a Green New Deal when he ran for governor of New York in 2010. He has three times polled enough votes to give the Green Party ballot status in New York, finishing third each time. He has also ran for US Senate against Hillary Clinton in 2006 and for local office many times in Syracuse, New York, where he has polled between 35% and 48% in his last four races. A retired Teamster, he has been an activist for civil rights, peace, unions, and the environment since the 1960s.

The centerpiece of Hawkins' campaign for president is an ecosocialist Green New Deal. He is calling upon the nation to declare a climate emergency and mobilize a crash program to convert the economy to 100% clean renewable energy with zero greenhouse gas emissions by 2030. He said that will require social ownership and democratic planning of key sectors, including energy and railroads.

"The climate crisis is an existential threat to humanity. Real solutions can't wait. We need World War II scale mobilization to address this threat. It requires an immediate nationwide ban on fracking and new fossil fuel projects. Instead we must mobilize our capital and knowhow for rapidly building out a clean energy system. It will create millions of jobs and build economic prosperity as well as climate protection," Hawkins said.

Hawkins' announcement comes on the heels of a surge in votes for Green parties in the elections for European Parliament over the weekend. "The European Greens campaigned for a Green New Deal of climate action, social protections, and strengthened democracy. The Green New Deal is the program of hope that we can rally around to beat the ultra-right's program of fear based on racism, xenophobia, religious bigotry, fact-free irrationalism, and authoritarianism. It's how we beat the politics of Trumpism," Hawkins said.

During his announcement, Hawkins released a blueprint and budget for an ecosocialist Green New Deal that he intends to advance as the standard against which the presidential campaign debate on the Green New Deal should be measured.

The budget covers a broad range of economic and environmental policies and programs, with their costs, the jobs created, and the sources of funding. The bottom line numbers show nearly 23 million new jobs created, including nearly 6 million manufacturing jobs, by investing about $2 trillion a year in reconstructing the energy and other productive systems for ecological sustainability over the next 20 years. A multi-layered web presentation of the budget that provides documentation and background information is on Hawkins' campaign website at howiehawkins.us.

"It is great that Representative Alexandria Ocasio-Cortez and the Sunrise Movement succeeded in putting the Green New Deal into the national spotlight. Unfortunately, they took the brand but watered down the content. Then the Democratic leadership shot it down anyway. Our full ecosocialist Green New Deal is what is needed to avert a climate catastrophe and to reverse the growing economic and racial inequality in the United States," Hawkins said.

Hawkins noted that the failure of the Democrats' Green New Deal to ban fracking and all new fossil fuel infrastructure means their program fails to address the climate crisis. "New fracking wells and pipelines, fracked-gas power plants, and fracked-oil transportation means the country will be locked into another 40 years of fossil fuel dependence and greenhouse gas emissions. That leads to a climate holocaust," Hawkins said.

Hawkins said his ecological Green New Deal encompasses both an Economic Bill of Rights and a Green Economy Reconstruction Program.

The Economic Bill of Rights covers a job guarantee, a guaranteed income above poverty, a $20 minimum wage, Medicare for All, homes for all through public housing and universal rent control, and tuition-free public education from pre-K through college.

The Green Economy Reconstruction Program will rebuild all sectors of production for ecological sustainability. Its headline goal is 100% greenhouse gas reductions and clean renewable energy by 2030 to avert dangerous climate change. It recognizes that 100% by 2030 is not possible without reconstructing all productive sectors for sustainability, from agriculture and manufacturing to transportation, waste management, urban infrastructure, and habitat restoration.

Hawkins' Green New Deal intends to rebuild American manufacturing from its machine tool core out to the manufacturing of intermediate and consumer goods.

"We want to build clean zero-waste Green New Deal factories in every congressional district," Hawkins said. "We are going to revive the economies of the Rust Belt, inner cities, and rural America by developing public enterprises and worker cooperatives to do this work. We will link the Green New Deal factories to the larger economy through publicly-owned and democratically-planned systems for renewable energy, universal broadband, and electrified rail transportation."

Hawkins said an ecosocialist approach is mandatory in order to quickly develop and coordinate the manufacturing enterprises needed for ecological conversion of the economy.

"Exxon and the Koch Brothers are not going to reinvest their fossil fuel profits in renewables. Big Oil must be nationalized. Just as the federal government took over or built a quarter of US manufacturing capacity during World War II in order to turn industry on a dime to build the 'Arsenal of Democracy' that defeated the Nazis, we need to take the same kind of positive government action in order to defeat climate change," Hawkins said.

"We will do one important thing differently this time," Hawkins added. "We will spread the wealth created through this program by turning the industries we build over to the workers as worker-owned cooperatives instead of giving them away to the superrich and their giant corporations as the US did after World War II."

Hawkins said a primary goal of his campaign will be to build up the Green Party. He announced a 50-state organizing plan to ensure the Green Party is on the ballot in all 50 states and Washington, DC. He said ballot access is the prerequisite for building the party from the bottom up. Statewide ballot qualification is required for local Green candidates for municipal, county, state legislative, and US House seats to simply be on the ballot.

"The United States cannot credibly influence other countries to promote democracy and human rights until it sets a good example. Ballot access laws in the United States are the most restrictive by far of any electoral democracy in the world. American progressives need to take up the fight against party suppression as part of the fight against voter suppression," Hawkins said.

Hawkins also called for other major pro-democracy reforms, including a ranked-choice popular vote for president and proportional representation in Congress.

The Hawkins campaign will hire organizers to support Green Party local chapters, down-ticket Green candidates, and expanding the party base, particularly among low voting sectors of the working class, youth, and people of color.

Hawkins also outlined a range of other policies he will campaign for, including the demilitarization of US foreign policy, seeking the abolition of nuclear weapons, reparations for African Americans, the legalization of marijuana and a decriminalization and harm reduction approach to other drugs, and amnesty for immigrants and open borders on the model of the European Union.

Hawkins explained that it is necessary for the Green Party to run a strong presidential candidacy in 2020 because "the Democrats and Republicans do not represent us. They are not providing real solutions to the problems we face. The capitalist parties do not represent the working class majority. The Democrats hesitate to impeach Trump despite his obvious record of crimes and corruption. They join with Trump in supporting a coup and possible military attack against Venezuela. Both parties support a continually expanding war budget for a global military empire. Both parties have done nothing for the last 45 years to stem the increasing economic and racial inequality."

"We have real solutions—and real solutions can't wait until after 2020. The climate crisis won't wait. The crises so many working people face every month to pay for groceries, rent, utilities, medical bills, and tuition and student loans can't wait either. If the Greens don't run, our solutions will not be raised," Hawkins said.

After making his announcement in Brooklyn, Hawkins headed off on a 10-day barnstorming tour that will take him to campaign events in Virginia North Carolina, South Carolina, Georgia, Florida, Alabama, Missouri, and Ohio.