Hillary simply lost Black votes because of her own arrogance 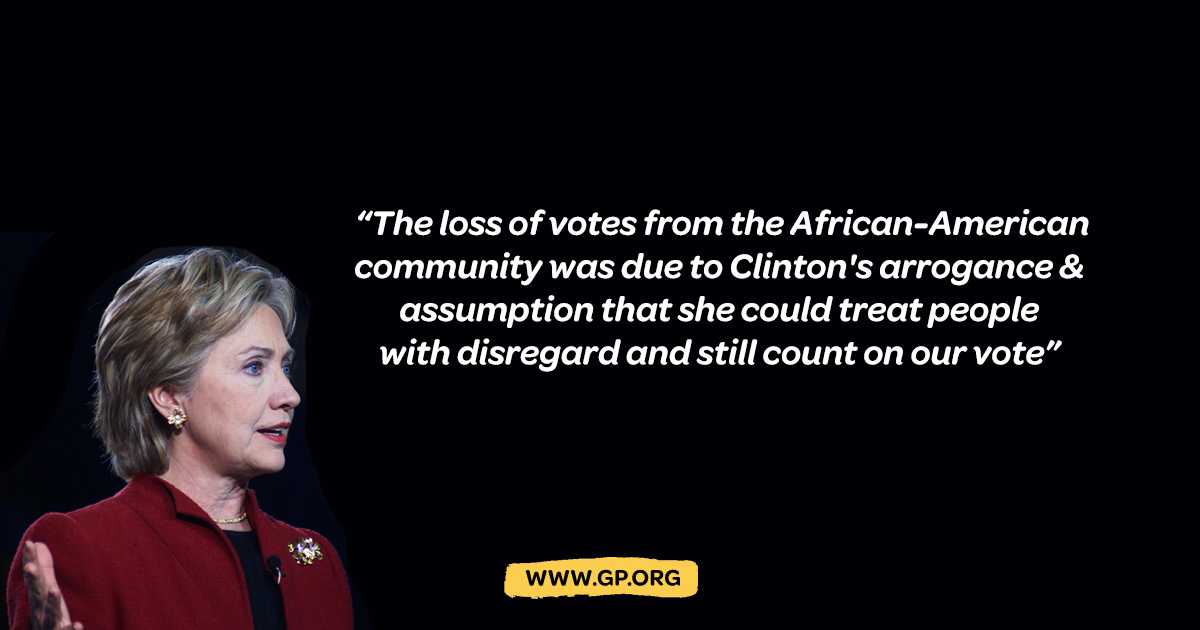 Adam Peck, editor of ThinkProgress, obviously doesn't accept that the duopoly system has gone into self-destruct mode, nor that the Democratic Party has abandoned all pretense at being a force for progress. Instead he blames its woes on Jill Stein and the Green Party. His ThinkProgress article of December 22 begins:

"The extent of Russia's involvement in the 2016 election is well-documented and yet still not fully understood. Russian agents were responsible for stealing and releasing emails from the Democratic National Committee. Russia used Facebook, Twitter, and other platforms to spread disinformation and sow discord among the American public. This was done to benefit then-candidate Donald Trump."

Well, I certainly find this disturbing since Trump's outlandish behavior towards women, the disabled community, African-Americans, and indigenous people has caused more mishap to the American population than Russia ever could. So I must ask, how does Peck know about the Russians' dastardly deeds? From this completely reliable source:

A new report commissioned by members of the U.S. Senate Intelligence Committee [USSIC] expands upon another facet of Russia's pro-Trump operation: an effort to divert votes away from Hillary Clinton and toward Green Party candidate Jill Stein.

You surely remember the USSIC. They're the bipartisan gang that oversees the United States Intelligence Community (IC), the federation of 17 U.S. intelligence agencies providing the muscle behind the entire Muellergate Russia hysteria. Their proud record includes the Report of the Select Committee on Intelligence on the U.S. Intelligence Community's Prewar Intelligence Assessments on Iraq, which officially justified the Bush administration's invasion of Iraq to save us all from the menace we faced from Saddam Hussein's Weapons of Mass Destruction — and the invasion that killed over a million Iraqis from disease, starvation and infant mortality. Not to mention the cost to the U.S. Treasury of over $3 trillion (per the Washington Post).

Moving forward, Peck turns to a NBC News analysis that found that:

Yes, "1,000 times." But it gets worse. The Russians boosted Stein's candidacy by "targeting voters from key Democratic demographics."

"Black voters were one of the main targets of Russia's propaganda effort. Previous disclosures by investigators looking into Russia's election manipulation campaign have noted that a central pillar of their interference game plan involved stoking racial animosity via social networks."

Since we all know that the Democratic Party owns the fealty of Black voters lock, stock and barrel, well, need Peck say any more? Prosecution rests. Guilty guilty guilty.

When will the Democrats realize they had a horrible candidate? When will white neoliberal women realize that Hillary Rodham Clinton is not the answer for America?

What infuriated me even more was how this article insulted the intelligence of Black voters! The article states that Blacks were one of the main targets of Russian propaganda, which used certain tactics to create racial animosity and even voter suppression. Mr. Peck where have you been?

Let me back up and make sure that I address this best I can.

First of all, Mrs. Clinton was the worst candidate for the African-American community. Yes, "woke" and more important SELF-DETERMINED educated Black voters knew and still know that the Clintons are responsible for the demise of the Black family and for mass incarceration run amok. Bill Clinton pretty much copied Ronald Reagan's agenda on crime, welfare, and taxes, and did horrible damage to the Black community. Let me remind you that it was Bill Clinton who rammed through the three strikes law and mandated life sentences for three-time offenders. The Democratic Party has touted all these and more as victories for their party. And just like they stole "crime reform," they are now trying to steal the Green New Deal as theirs.

Oh, I haven't forgotten the part Hillary played in all of this. Let's just say she has been well groomed by the Republicans in dog whistling. Reagan won the presidency by using coded language: "welfare queens," "big government," and yes, "predators." Similarly, Hillary supported the 1994 crime bill. Even more horrific was how she used out of her own mouth the coding of the Southern strategy when she basically called Black children animals. Said HRC:

"They are not just gangs of kids anymore. They are often the kinds of kids that are called super predators. No conscience, no empathy. We can talk about why they ended up that way, but first we have to bring them to heel."

There has been a grand competition between both the Republicans and Democrats over who can most blatantly declare war on the African community. Hillary Clinton has been a key player in this debacle.

Peck needs to do his homework

Black voters never needed a Hillary Clinton to lead us out of an Egypt that she and BIll had helped create. She lost Black voters because she didn't and doesn't deserve the vote from our communities. Not all Black folks want a white Saviour in times like these. The loss of votes from this community was due to Clinton's own arrogance and her assumption that she and her husband could treat people with such disregard and still count on our vote.

Russia didn't have anything to do with her losing an election. The Green Party didn't have to conspire with anyone for her to be defeated. Her own Karma caught up with her, just as the United States is now reaping its own centuries of bad Karma. 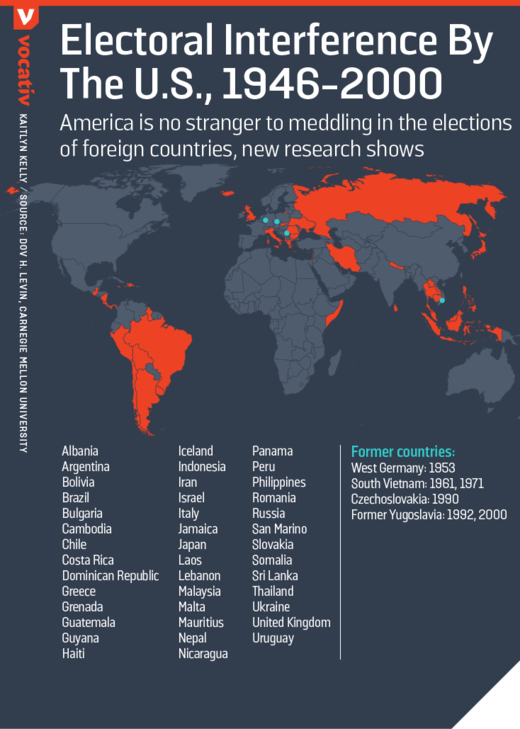 I wonder if Mr. Peck is aware that the U.S. has interfered in about 85 elections around the world since 1945. Not to mention supporting coups or military occupancy in smaller countries, in efforts to sway or determine their elections. The U.S. has too much blood on its hands for such meddling.

Can an erstwhile progressive like Mr. Peck think he can line up with the U.S. Intelligence community and its Senate overseers and still maintain even a shred of progressive credibility?

Is it possible, Mr. Peck, that there is an awakening, not just in the African communities, but amongst all Americans that the VOICE of the people will be amplified? Unfortunately for Peck and his ilk, it won't be the duopoly system.

It seems there is fear that the Green Party could be part of the revolutionary process that will dismantle this corrupted racist electoral apparatus.