The History and Future of the Green Party 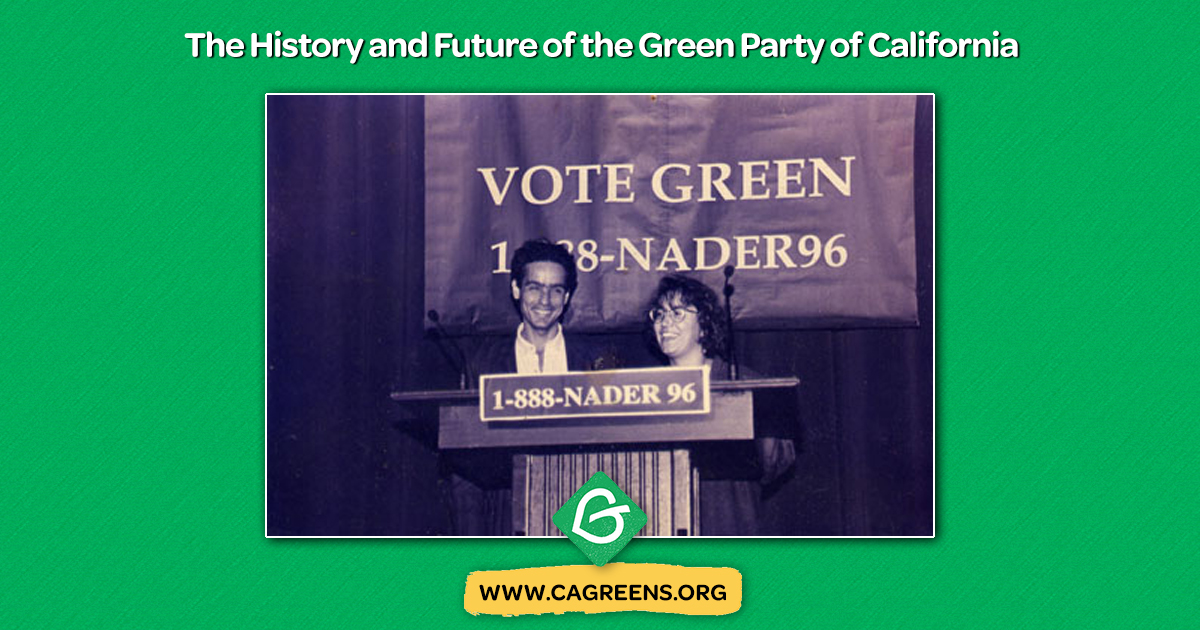 This month marks the 30th anniversary of the Green Party in California — please join us to discuss our history and our future — both locally, statewide, and nationally!  We’ll briefly review the events which led to us receiving official statewide recognition on January 21, 1992, starting with the inspiration of European Greens being elected to their national legislatures in the early 1980’s, the publication of the book “Green Politics” by Charlene Spretnak and Fritjof Capra in 1984, and the creation of the “Green Committees of Correspondence” and state and local Green groups from the mid-1980’s onward — eventually leading to the first U.S. Green state political parties in the early 1990’s.

Then we’ll look at successes and failures of the Green Party in the U.S., California and locally since then, from Dona Spring being elected to the Berkeley City Council in 1992, our first statewide campaign in 1994, and Ralph Nader’s several Presidential campaigns starting in 1996.  We ran our first full slate of candidates for California offices in 2002, and this year we are running an historic “Left Unity Slate” including Peace and Freedom Party candidates.

We will devote a significant portion of the time to envisioning and discussing our future!  Given the ongoing economic hardships which are assaulting most people, continued racial and gender oppression, worsening environmental disasters, and a host of other failures facilitated by the ruling “Demopublicans”, what is the best way the Green Party can serve in 2022, and beyond?  We look forward to you joining us on Sunday night, to discuss our history and our future!

Greg Jan has been involved with the Greens since 1985, including the “Greening the West” gathering, and assisting with the founding of our state party from 1989 to 1992.  He’s worked on many election campaigns since then, at local, state, and national levels, and has helped with administrative and coordinating work with his local County Council, its Voter Guide, and with some state party activities.

Outside of the Greens, he’s volunteered with peace groups, helped to coordinate several Berkeley Earth Day events, worked at the county food bank, and was on the Board of Oakland’s Ohana Asian Cultural Center.
He currently serves on our state party’s Statewide Candidates Subcommittee, and was recently elected to the state party’s Coordinating Committee,

Laura Wells has been a Green since 1992 when the Green Party first became ballot-qualified in California. She has run for the offices of state Controller and Governor (2010), and as a Congressional candidate in 2018. She lives in Oakland.

Laura has been an active internal Green Party organizer, and is currently a member of the GPCA state Coordinating Committee. She advocates for the multi-party necessity of proportional representation.

For 2022, Laura again will be running for State Controller and her platform is to Tax the Rich, institute Public Banking at the state and local levels, establish a single-payer (or better) healthcare plan, and end fracking and other wasteful water policies.

Green Sundays are a series of free public programs & discussions on topics “du jour” sponsored by the Green Party of Alameda County and held on the 2nd Sunday of each month. The monthly business meeting of the County Council of the Green Party follows at 7:00 pm, after a 30-minute break.

Dial by your location