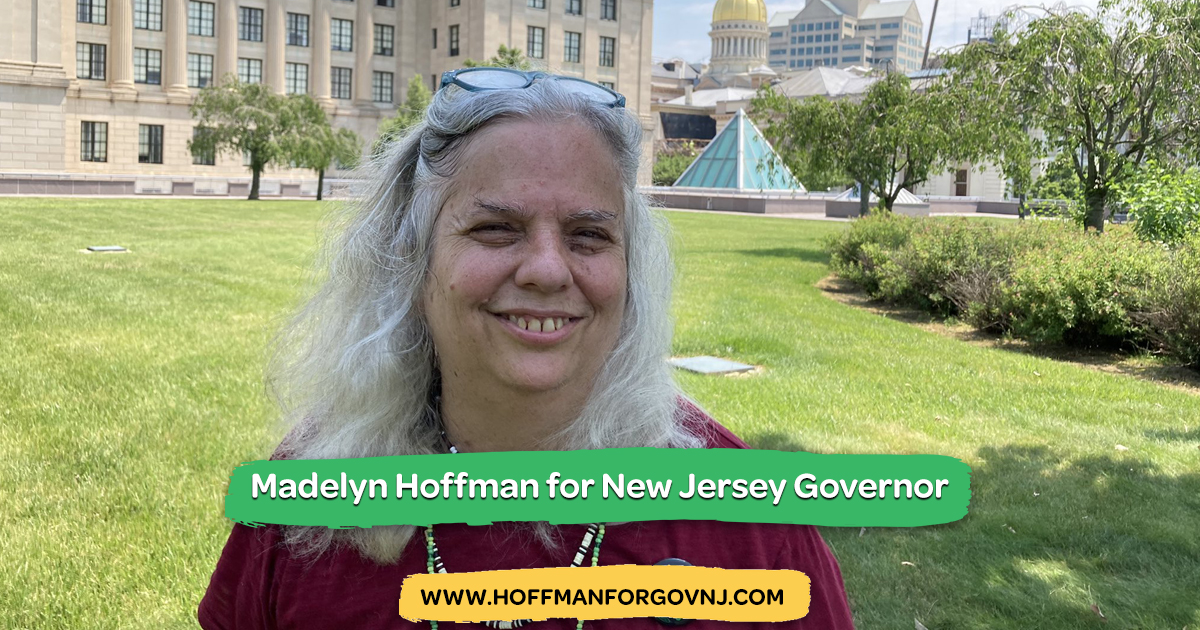 By now, you've been bombarded by ads from Democratic Gov. Phil Murphy and Republican nominee Jack Ciattarelli running for governor

But there are other choices: New Jersey has three other candidates vying for the top job in state government. On the ballot Nov. 2, voters will see candidates from the Libertarian, Green, and Socialist Workers parties.

They've been absent from debates due to fundraising rules, and have much smaller teams trying to traverse the state to connect with voters. Still, the candidates have dedicated months to campaigning.

"I have no illusions about what's going to happen in this election, but I do have strong criticism of the way state officials and the media in this state [have not given] alternative political parties the room to breathe, the room to be heard, the room for other people to hear us," Madelyn Hoffman, the Green Party candidate, said.

"I've been crisscrossing this state, in my own time, at my own expense," Hoffman said. "I don't know if people really appreciate how much time and energy and effort goes into these campaigns, and how we put ourselves on the line every minute of every day."

Third party candidates have made significant noise in some past races. In 2009, Christopher Daggett, an independent candidate, raised enough money to join Chris Christie and Jon Corzine on stage during a debate. And in 1997, Libertarian candidate Murray Sabrin won around 5% of the vote when he ran for governor against Jim McGreevey and Christine Todd Whitman.

Here are the third party candidates you'll see on this year's ballot:

Hoffman has run on the Green Party ticket in elections since the 1990s, including a 2020 bid for U.S. Senator against Cory Booker, where she came in third, and as Ralph Nader's vice presidential running mate in New Jersey in 1996. A life-long activist, she has served as the executive director of both the Grass Roots Environmental Organization of New Jersey and New Jersey Peace Action.

Hoffman supports single-payer healthcare at the national and state level. She also would roll out an Ecosocialist Green New Deal, which goes beyond the work in Congress on a Green New Deal. It includes a Green Economy Reconstruction Program would get the state to 100% clean energy by the end of the decade, create new jobs, protect workers' rights, break up big banks and reform the democratic process.

"I don't see any one issue in isolation," she said.

Her approach to environmental justice moves New Jersey off fossil fuels at a rate faster than Murphy's Energy Master Plan, but would also address overdevelopment that has led to dangerous flooding.

Hoffman's platform includes cutting funding to police and reinvesting it in communities, as well as support for reparations for both Black and Native American communities.

When it comes to education, Hoffman supports eliminating public funding for charter schools and combining school districts in some places to spread wealth and resources. She supports universal pre-school and free tuition at state colleges in New Jersey and student debt forgiveness.

The 64-year-old lives in Flanders. She said her party also wants to see ranked choice voting put into practice to help break the stronghold Republicans and Democrats have on the political system.

"We believe in anything in measures that will open up the elections process," she said.

Currently a deli worker at Walmart, Joanne Kuniansky is running for governor on a platform built around bolstering workers' rights and supporting their collective action.

"We think that Democrats and Republicans are both parties that defend capitalism as a system," Kuniansky, 66, said. "It's the lesser evil game that's been a big obstacle to workers organizing our own party that fights in our interest."

She supports access to abortion, birth control and vaccines, but through the power of unions and organized action. Kuniansky, who lives in West New York, said she does not support government mandates on vaccines or those that led to lockdowns. Instead, her party platform supports workers engaging together and debating these issues.

"If I get elected, I'll use the resources of government to support every fight that's going on in the fight for the working class," she said.

Worker exploitation came to the forefront during the coronavirus crisis, as front-line workers continued to show up for work and fell ill. Many like grocery store, restaurant and transportation workers suddenly became "essential," working long hours for little pay.

Her party aims to protect people from continuing to work long hours in unsafe conditions.

"We were told it was to help everyone," Kuniansky said. "But then the bosses want to maintain these harsh conditions as the new normal, and workers are saying, 'I'm not doing that.'"

Gregg Mele is an attorney living in Bridgewater who wants to cut down on government — from big spending to what he sees as over-reaching COVID-19 mandates.

"We're the only one looking to reduce government," he said. "Otherwise, we are the party of individual freedom and personal responsibility."

If elected, Mele said he would do away with mandates for vaccines, testing and masks, as well as social distancing constraints that stifle business. Instead, his party wants to return health-related choices to the people and allow businesses to make their own decisions regarding health precautions.

Mele wants to see infrastructure improvements and climate change solutions through the private market. He blamed a lack of bidding in public projects for "shoddy" work, and said he supports privatization of such services.

The 56-year-old has four masters degrees, and said his areas of expertise lie in technology, finance, economics and law.

Mele supports doing away with regressive taxes that put burdens on middle and working class people, like the gas tax. He believes easing those burdens could ease income inequality in the state.

"I'd rather have the estate tax on the more wealthy, and not all these other taxes that are breaking the backs of our community and workforce," he said. "It's all just widening the wealth gap exponentially."