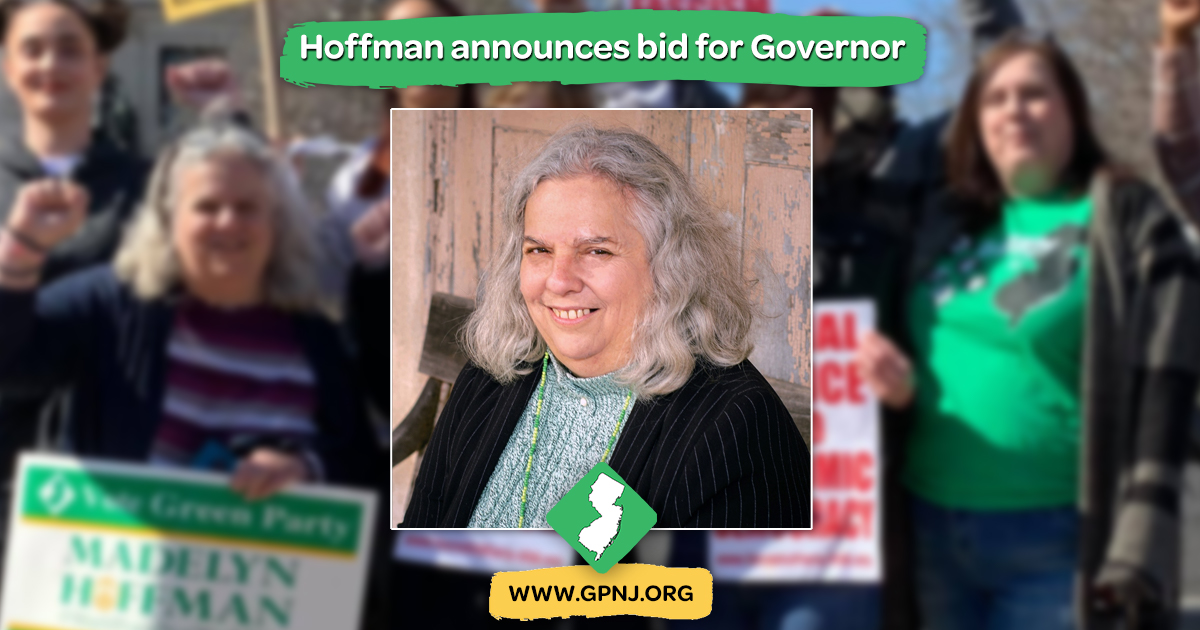 Madelyn Hoffman, the Green Party of New Jersey's candidate for the U.S. Senate in 2020, today announces her intention to seek the nomination of the Green Party of New Jersey for Governor in 2021. Hoffman announced that she will begin gathering signatures to be placed on the ballot in November, and working to earn the support of activists around the state. State Election rules require that she obtain a minimum of 800 valid signatures from registered voters in New Jersey. These signatures must be submitted either electronically or in hard copy before 4:00pm on June 8th.

"We are seeking the endorsement of the Green Party of New Jersey for this year's campaign," said Madelyn Hoffman, "to build off our record-setting 2020 campaign. We received 38,288 votes, the highest ever for a Green Party candidate running for U.S. Senate in New Jersey. The only candidate running statewide in New Jersey to have performed better was Ralph Nader in the presidential election of 2000. As a party, we have grown by 260% since 2017!"

"Madelyn's showing in 2020, during the time of COVID-19, where campaigning was, of necessity, so different and mostly virtual, indicates that the people of New Jersey are looking for an alternative to the Democrats and Republicans," said Barry Bendar, GPNJ Elections Chair. "We know there are many issues the people of New Jersey face that neither the Democrats or Republicans have been able to address, such as a real Green New Deal and a Green Bill of Rights, confronting climate change by moving the state toward 100% reliance on renewable energy, closure of ICE detention centers and release of all detainees, a legalization of marijuana program that finally decriminalizes it and so much more. I look forward to discussing them all with Madelyn during our vetting process."

Matthew Skolar, the outreach coordinator for Hoffman's 2020 campaign and chair of the Green Party of New Jersey's youth caucus said, "2020's campaign showed the power of grassroots organizers to transform their activism into electoral results. Young activists in particular were embraced by Madelyn and her campaign, and held a lot of power in the decision making process. Those same young activists look forward to the gubernatorial race, where Hoffman has already pledged to give young people seats at the table."

People interested in signing Madelyn Hoffman's ballot access petition can click on this link or contact [email protected] to obtain an electronic version of the petition, suitable for downloading, printing, and collecting signatures on paper.