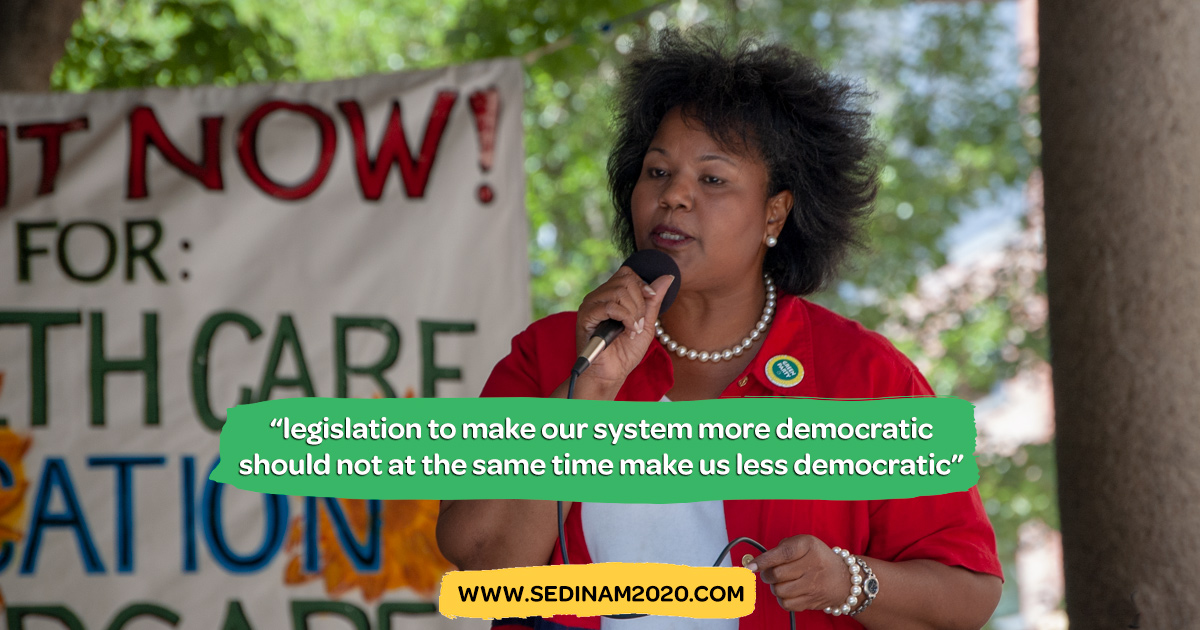 Gardena, CA -- Green Party Presidential Candidate Sedinam Kinamo Christin Moyowasifza-Curry today called on Congress to make significant changes in House Democrats' legislative centerpiece HR1, the "For The People 2019 Act", particularly in the portions of the Act having to do with campaign matching funds.

"While there is a great deal of good in this legislation, making voting more accessible and more secure; laying the groundwork to overturn the horrible Citizens United v. FEC decision; strengthening our system of public financing of elections; and more, there are a couple of very serious problems with the bill," Moyowasiza-Curry explained, "and I urge members of the House of Representatives who really do care about making our political system more democratic to fix those flaws before voting on this legislation."

Foremost among the problems are significant increases to the fundraising thresholds for candidates to qualify for Federal matching funds. "Increasing the threshold for qualifying for Federal matching funds for Presidential candidates from $5000 per state to $25,000 per state in a minimum of 20 states will throw a huge barrier in the way of political parties other than the 'major' parties, who don't even participate in the funding system anymore. The public has shown so many times that they want more options, and legislation to make our system more democratic should not at the same time make us less democratic," Moyowasiza-Curry noted.

Moyowasiza-Curry applauded the bill's extension of the Federal matching fund system to races for the US House of Representatives, but noted that this, too, is flawed. "At the same time that the bill tries to make more of our political system free from the influence of money, it puts financial barriers in the way." HR 1 would open Federal matching funds to House candidates who raise at least $50,000 from at least 1000 different donors. "Candidates running outside the 'big 2' are the ones who need this assistance the most, but many of them have a hard time raising even a fraction of that limit. This is not the way to bring more voices into our political conversation."

A few very simple fixes to the bill would make the playing field much more level for third party and independent candidates at both the House and Presidential level, said Moyowasiza-Curry campaign adviser Eric Siegel, a political scientist and pollster based in Oak Park, Michigan. "Keeping the Presidential threshold at $5,000 each in at least 20 states would ensure that campaigns get the boost they need to organize and get their message out, without putting an undue burden on them. And a $5,000 floor for House candidates would maintain the requirement that they show a breadth of support without putting yet another artificial barrier in the way of candidates from outside the traditionally dominant parties. Political science research tells us that more candidate choice leads to higher turnout, and this bill is mostly designed to encourage people to join the process. Why undermine that mission by restricting voters' options?"