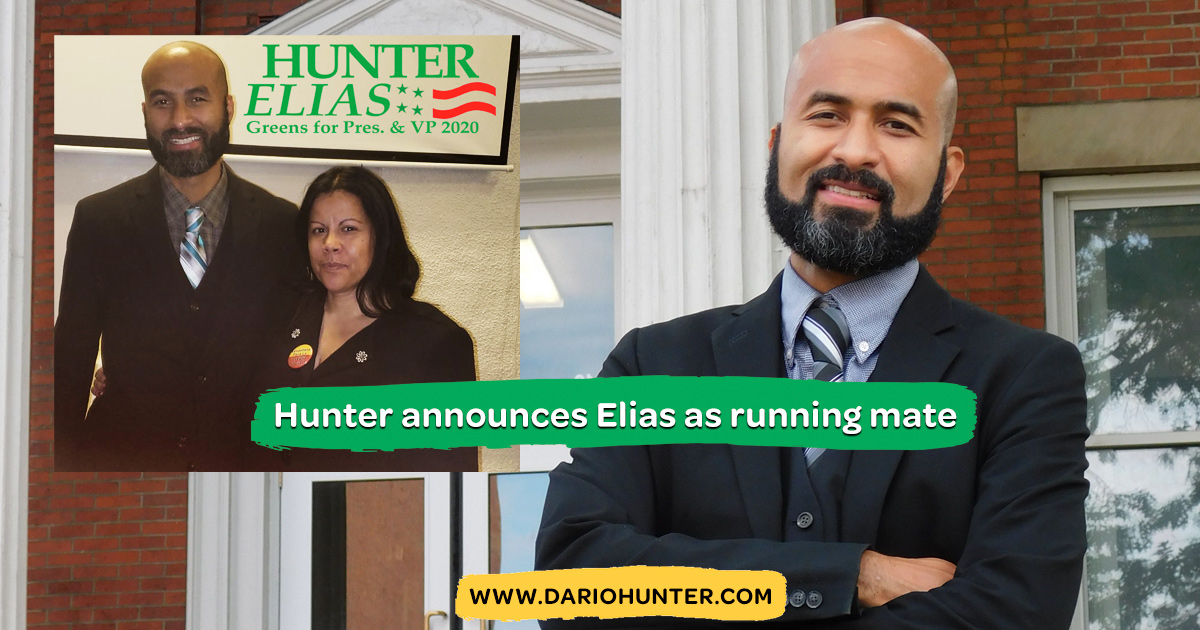 WALNUT, CA - Fresh off a decisive 81% win in the Green Party's Minnesota Caucus, Green presidential primary candidate and former Youngstown, OH School Board Member, Dario Hunter, announced tonight at a Boston campaign event that his running mate will be Holyoke, MA native Darlene Elias. Elias, a social worker and probation officer, is a former co-chair of the national Green Party and an activist for women's rights, the Latinx community and housing rights. A former candidate for Holyoke City council in 2015 and 2017, her activism with the Green Party began with a successful effort to prevent the demolition of Lyman Terrace, a low income housing complex in Holyoke, MA where she grew up.

In announcing his pick, Hunter noted that Elias brought qualities and accomplishments to the ticket that would greatly enhance the Green Party's outreach and activism on a number of issues, from women's rights, to indigenous sovereignty to ending colonialism. According to Elias, "I'm running because the voice of the people is absent from our current political system. We need to do what it takes to get real system change."

Hunter noted, "It's important to make this pick now because the challenges we face as a party to ballot access mean that we need to be ready earlier than the Democrats and Republicans. And we've got a solid team, a solid ticket to address the issues that Americans face everyday - one that resembles and speaks to the American experience."

Black, openly gay, the son of an Iranian immigrant and Jewish, The New Republic has called the Green Party's Dario Hunter “as diverse as candidates come.” Elias, of Puerto Rican and Hawaiian descent, has previously spoken before a United Nations special committee on Puerto Rico to call for its independence.

The Hunter/Elias campaign advocates for a Green New Deal that will transition the country to 100% renewable energy, replacing the war budget with a Department of Peace and a diplomatic realignment called the Green Path Forward to negotiate global carbon reduction benchmarks and tackle other crises such as plastic pollution. Their platform aims to cover everything from single-payer universal healthcare to ending privatization in school districts. Hunter/Elias ''People of Color Bill of Rights", described as a ‘New Deal’ for this country’s racial minorities, seeks to tackle the many ways People of Color have experienced unequal treatment, from access to justice issues to banking to employment discrimination.

For more info on the Hunter 2020 campaign, visit dariohunter.com.