Ian Schlakman is running for President 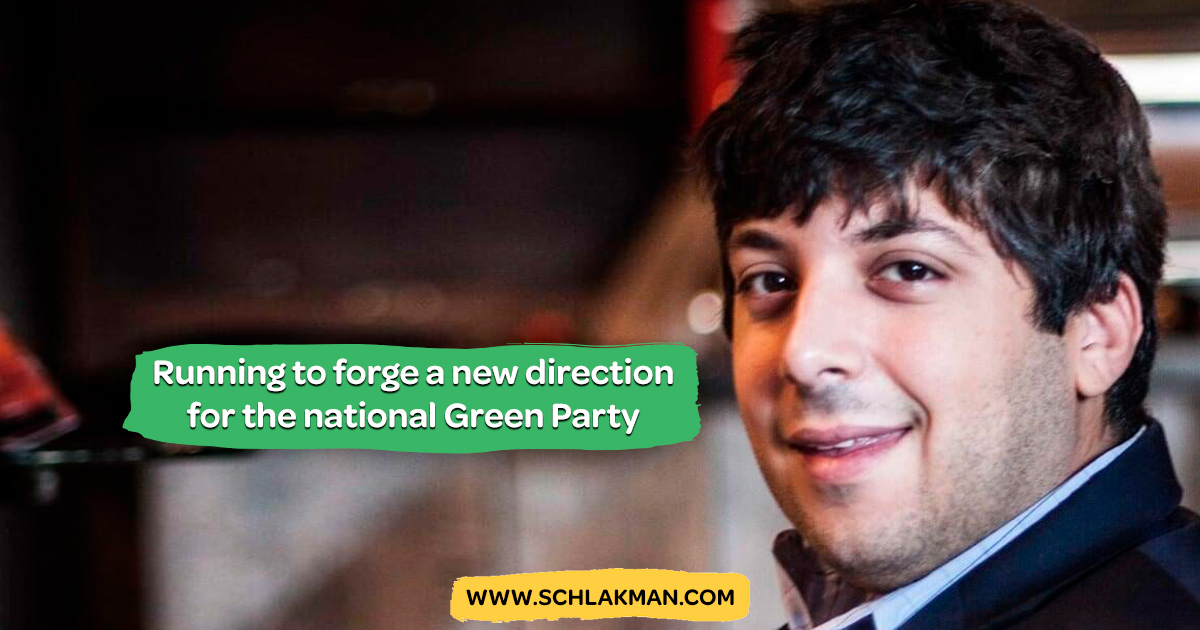 Ian Schlakman, the 2018 Green Party Candidate for Governor of Maryland, is running for the Green Party presidential nomination on a campaign platform of solidarity. If you’re an active Green Party member then you already know that the Green Party has the best policy platform of all the political parties. Our policies promote grassroots democracy, urgently addressing the climate crisis and a more peaceful planet. We know as Greens that our platform is the best one out there, not just for activists, but for students, people of color, the working class, the poor, the homeless and more.

However, we can’t claim to be the party that represents all of these diverse groups of people unless we actually go into these communities and aid them in their struggle in a true spirit of solidarity. Building long-lasting relationships in the communities that both corporate parties have abandoned and betrayed is exactly where the Ian Schlakman campaign for President is focusing.

Just this week Ian received an award for his work in Public Housing and Douglass Homes in East Baltimore. In a small ceremony in the Douglass Homes Public Housing Project Community Center, the Social Services Coordinator, elected Green Party member HUD RAB Delegate Annie Chambers, and the entire Douglass Homes Tenant Council presented Ian Schlakman and a few others with certificates of appreciation for the work they had put into the public housing community. While the Democrats only show their face in public housing projects when they need a photo op for election season, our team has consistently worked to protest rate increases in public housing, improper conditions, and we have made sure that the tenants are fairly represented in each community.

Last week Ian was the only Presidential candidate to speak at the anti-war protest in front of the Venezuelan Embassy in DC alongside his former running mate Rev Annie Chambers. The Green Party is the only political party that has publicly condemned the US-backed coup in Venezuela. Being the only Presidential candidate to address the Code Pink protestors, Ian was able to show the cheering pro-peace activists that the Green Party is ready to back up its rhetoric with shoulder to shoulder support on the front lines in the street. This is how the Ian Schlakman campaign proposes to grow the Green Party, by showing that we in the Green Party actually live our Ten Key Values.

"If you are ready for a new direction for the Green Party on a national scale, then I am asking for your support in my campaign. If you're ready to take the progress that we've made in growing the Green Party in Baltimore City, and in Maryland, to the rest of the country, then join me in my campaing," declared Ian.

With Trump likely to be on the ballot in 2020, this will be a difficult year for the Green Party. But Ian believes that by focusing on down-ticket candidates such as boards of education, county commissioners, city races, and state delegates, we can grow the Green Party through local victories across the country. Ian has already started touring the East coast. "We have plans to reach all 50 states, but we cannot do it without your support. So if you believe there is an opportunity for the Green Party to grow through highlighting and focusing on winnable, down-ticket races, and supporting struggles of solidarity across the country, then we are humbly asking for your support. For more information and to see how you can get involved in effort to grow the Green Party go to schlakman.com."