In striking distance: Putting your vote over corporate profits! by Jill Stein 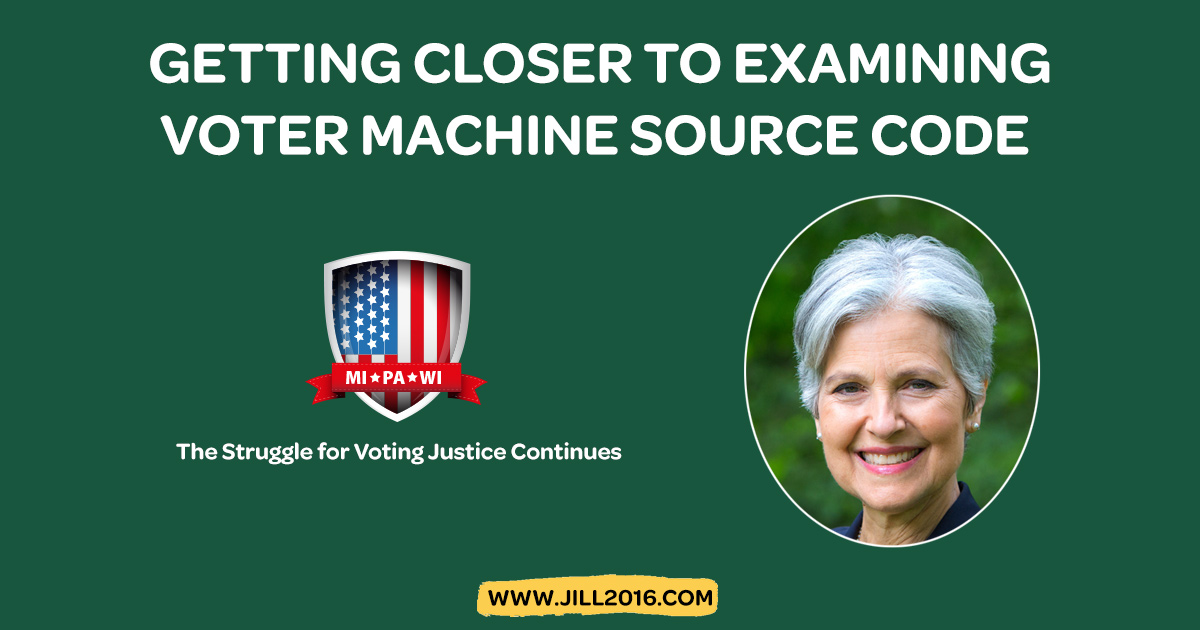 Over a year after the historic effort to recount the 2016 vote, our legal team is still at work in Wisconsin and Pennsylvania fighting for an election system that is accurate, secure and just – and free from interference by any intruders, whether foreign or domestic!

Towards that end, we now have the exciting opportunity to examine the secret voting machine "source code" – a crucial piece of voting machine software which controls the actual counting and tallying of the votes.

Incredibly, the source code for voting software has never before been examined for evidence of tampering or errors that would compromise an election!

During the recount, we claimed the right to examine this software under a new, unique Wisconsin law. This allows our computer voting experts to check for evidence of human error, intentional interference or tampering by anyone - whether foreign powers, criminal networks, domestic partisans, or corporations that control the voting software.

But it will be a tough legal fight to make this happen. That's because election law largely protects the privacy and profits of voting software companies over our right to an accurate and secure vote.

Before we can have the software examined, the Wisconsin Election Commission (WEC) must put in place confidentiality rules to protect the software companies' private information.

Not surprisingly, the vendors of the voting software used by Wisconsin, Dominion Voting Systems, Inc. and Election Systems & Software, Inc., have opposed our request and have sought what we believe is an unfair confidentiality agreement that would prevent us from communicating with the public about our findings - even if we agreed not to disclose anything proprietary.

The WEC has been reviewing our request and the vendors' response and we expect a final decision very soon.

If they do not grant us access to this crucial source code software, and the ability to share our findings with the public, we will challenge their decision in court.

The 2016 election was remarkable for evidence of hacking into multiple voter registration systems, private voting software companies, and local election officials' computers. That makes it all the more surprising that no one has checked to see whether the hacking extended to the voting software used during the election.

Stay tuned for an update from Wisconsin soon.

In Pennsylvania we had sought a Federal Court order for a statewide recount, including an examination of voting machine software, which unfortunately was denied in December 2016. Though that decision derailed the Pennsylvania recount effort, we came right back with a challenge to the constitutionality of Pennsylvania's incredibly complicated recount procedure.

We expect that the case and its accompanying appeals are still a long way from over. Stay tuned for updates as the case progresses.

In addition to the lawsuit, Pennsylvania has seen an impressive emergence of grassroots action on election integrity and voting justice issues. Along with many other organizations, our team and supporters are working to prevent Pennsylvania from enacting restrictive Voter ID laws, and other disenfranchisement schemes like the wrongful purging of legitimate voters through programs like Interstate Crosscheck. We also note the stunning legal victory against gerrymandering in a case led by the PA League of Women Voters.

It's clear that the struggle for election integrity and voting justice won't be easy or quick, but it is critical for building a real democracy that our future depends on.

Thank you for leading the charge, and making all of this possible with your initial recount support!

It's in our hands,
Jill Stein

PS. If you have questions about the recount effort or ongoing election integrity litigation, please take a look at our Recount 2016 frequently asked questions. If you don't see an answer to your question, please send it to us and we'll do our best to answer it.