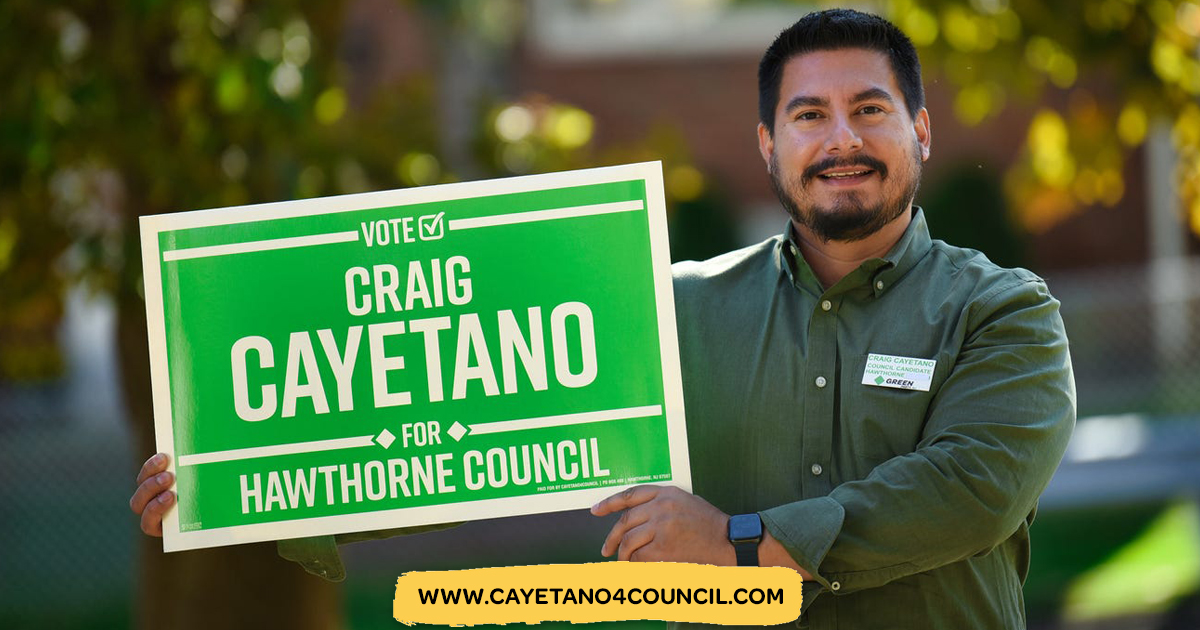 HAWTHORNE, NJ — Craig Cayetano could have been another cog in a political machine. But he did not want that for himself, and he did not want it for citizens of this Republican-controlled borough in a county powered by Democrats.

Cayetano, 41, a car salesman, is the state's only local-level candidate representing the Green Party of New Jersey. He is in a race with six other contenders for three at-large seats on the Borough Council.

The turnout of unaffiliated voters will make or break his run for office, he said.

"It puts more pressure on me," said Cayetano, a native of Bergenfield, "but I feel more honest by doing it this way. I don't want to become what they are."

His opposition is composed of two separate brackets: three Democrats and three Republicans.

The Democratic slate is Thomas Bushnauskas, Hope Foley and Ann Marie Peterson. And the Republican team is Councilmen Bruce Bennett and Dominic Mele, as well as Anna Marie Sasso. Each council term is for four years.

Voters will also pick a new mayor to lead the borough until the end of 2025. Democratic Councilman Joseph Wojtecki is vying for the top post against John Lane, a Republican and vice president of the seven-person council.

Mayor Richard Goldberg, a Republican who has held the position since his predecessor resigned in August 2008, did not seek reelection.

Cayetano, who was endorsed by the New Jersey League of Conservation Voters and the state's chapter of the Sierra Club, balked at the notion that his candidacy introduced a spoiler effect to the race.

"We're not spoiling anything," said Cayetano, a former Democrat who once stomped for Sen. Bernie Sanders, the presidential hopeful from Vermont. "We're the campaign that's bringing the real issues ahead."

Cayetano wants to take trash collection in-house, saying the service would likely pay for itself in five years if the borough got a grant for electric garbage trucks. He advocates for solar panels to be installed atop the borough hall. And a greenhouse could be built at the high school, he said, under a partnership with the Board of Education.

"The issue is that they're kicking the can down the field," Cayetano said. "But it's not just about putting your name on a ballot — you have to be accountable."

According to Michael O'Neil, a spokesman for the Green Party national headquarters in Washington, D.C., there are 81 candidates running for local offices on the party's ticket this year.

In New Jersey, O'Neil said, there are just five Green Party candidates in contention for any position — that includes Cayetano. Leading their ticket is gubernatorial candidate Madelyn Hoffman, an adjunct college professor of environmental science from the Flanders section of Mount Olive.

Cayetano, of Pasadena Place, ran for council in November 2019 and last year. He collected no greater than 17% of the votes in either race. But the difference this time, he said, is that he is running for an at-large position. In his previous bids, he was in contention to represent the council in the 3rd Ward alone.

Being able to canvass across the entire borough has helped him to spread his message and feel more confident heading into Election Day on Nov. 2.

"Am I going to pull votes from everyone? Yes," Cayetano said with a stroke of bravado. "They don't want to get all of the mailers, and all of the bologna."

But to break through the pack, he said he will have to lure people to the polls who have never voted in their lives.

"Maybe it's reached a boiling point where they've had enough," Cayetano said. "Maybe they want to see a change."