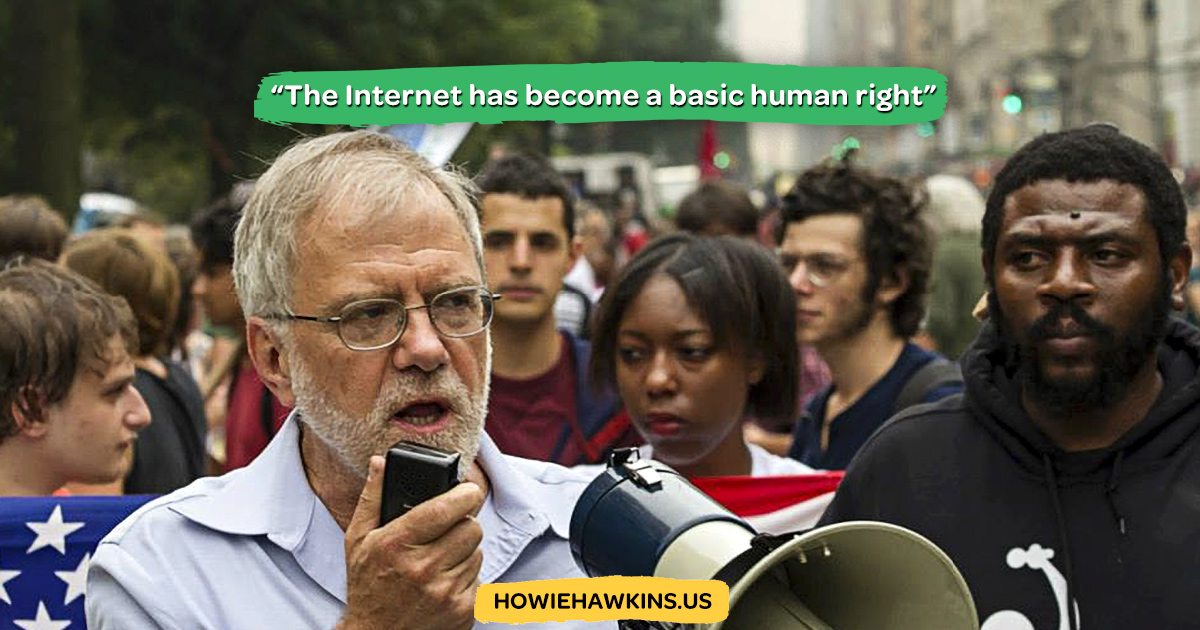 It is time for the public to take back control of the Internet, a technology that was created with public dollars, so it serves the people’s interests. Under President Trump, there have been backward steps for the Internet and mass communication. The Federal Communications Commission (FCC) has always been corporate occupied territory. The next president needs to appoint commissioners who represent the public interest, not the corporate interests of telecoms.

I have signed the pledge to restore Net Neutrality and not take funding from the telecom industry and urge all candidates to do so. Elected officials need to respond to the necessities of the people, not the oligopoly profits of corporate interests.

There are serious problems with Internet policy in the United States that are the predictable outcome of the FCC consistently placing corporate interests above the public interest. The Federal Communications Commission reports that 21.3 million Americans don’t have access to high-speed broadband. This is because profit, not public service, rules the FCC and the telecom industry. The price of the Internet is too high everywhere and big companies don’t want to invest in rural areas or poor urban areas while preventing communities from deploying their own alternatives.. Rural areas have small and dispersed populations, which lowers profit, and poor urban communities cannot afford telecom services. As a result, these communities remain underserved.

THE INTERNET IS ESSENTIAL FOR ALL

First Amendment protections including Freedom of the Press and Freedom of Speech should apply on the Internet, including on social media platforms. There need to be enhanced protections on platforms for political speech to prevent the use of modern censorship, i.e. using search engines, algorithms, and de-programming on platforms to suppress speech. Political speech should not only be protected in print and television, but should also be protected in the digital world, including websites, video, social media, and new outlets we cannot yet imagine.

Political speech on the Internet has been vital in recent years to put new issues on the political agenda. One example of many is people’s ability to video police violence, sometimes resulting in death, and share it widely. This has brought a long-term issue to the public consciousness and onto the political agenda. Without the people-powered Internet media, police violence would have remained unreported and hidden from public view.

A high priority of the next president should be to ensure a free and open Internet with equal access to all. This begins with remaking the FCC, which is currently headed by a former telecom lawyer, Ajit Pai. President Obama appointed Tom Wheeler, a telecom lobbyist from the Cellular Telecommunications & Internet Association, who worked for the National Cable Television Association and was an Internet venture capitalist. The next president should break that tradition and appoint FCC commissioners who put the people’s interests first and defend and expand the communication rights of everyone in the United States.

After a campaign involving millions of people calling for Net Neutrality, the Obama-era FCC put in place Net Neutrality rules and reclassified broadband providers as “common carriers,” which makes them subject to telecom regulation for the first time. This was a positive step that was reversed by the current FCC, a decision that has been challenged in federal court. A decision on that challenge is expected soon. No matter how that decision turns out, the Internet movement should continue to advocate for Net Neutrality and other changes to ensure the people are in control of the Internet and it serves our interests.

The Internet must be understood to be a common carrier that is run as a public utility with equal access for all. The Internet was created with public resources and Internet access should be a public utility, not controlled by private corporations. Control of the Internet by the public includes community-developed Internet, municipal Internet, or even nationalizing the Internet. I favor the latter approach. I have called for the building of an Interstate High-Speed Internet System as part of my Ecosocialist Green New Deal. It is time to reverse the privatization of the Bill Clinton-Newt Gingrich era and reclaim the Internet as a public resource. This means bringing the Internet under democratic control, replacing private providers with public alternatives where we can, and regulating them where we cannot.

In 2010, the city-owned power utility in Chattanooga, Tennessee began selling affordable high-speed Internet service to residents. Using a fiber-optic network built partly with federal stimulus funds, the utility offers some of the fastest residential Internet speeds in the world. The broadband industry has responded forcefully, lobbying state legislatures to ban or limit similar experiments. But the success of the Chattanooga model has inspired movements for municipal broadband in several other cities. As of January 2019, more than 800 communities had community-owned Internet providers and were served by municipal networks instead of just Big Cable, and more than 300 were served by cooperatives.

THE INTERNET AGENDA FOR 2020

A top priority is to restore net neutrality so the public does not lose the ability to access sites, small businesses can compete and thrive, and people are able to tell stories too often ignored by the mainstream media. The agenda for the Internet for the 21st Century has been laid out in the Right To Connect 2020 proposals created by Free Press Action which we endorse and build on with our own priorities. The ten-point agenda should be endorsed by all candidates. It includes:

TOWARD A NEW TELECOMMUNICATIONS ACT

Technology is outpacing the law. It is time for a new Telecommunications Act that democratizes the media, ensures the Internet serves the public good, and reins in corporate and government powers.

Related to the final point is a potential serious threat to the Internet. Elizabeth Goitein, co-director of the Brennan Center, wrote in the Atlantic in February that the 1934 Communications Act is being interpreted as granting the executive branch the power to “seize control of US Internet traffic, impeding access to certain websites.” This includes the ability to shut down the Internet, block the delivery of email, and manipulate smart speakers like Amazon Alexa upon the president’s proclamation “that there exists a state or threat of war involving the United States.”

Constitutional freedoms must be protected on the Internet. Ending privatization and returning the Internet to public control will ensure that constitutional rights are restored. Currently, Internet censorship by corporate interests is stifling the people’s media. In 2018, Rep. Ro Khanna introduced an “Internet Bill of Rights,” which was a good beginning to expanding protection of people’s rights on the Internet.

We must repeal the pro-conglomeration provisions of the Telecommunications Act of 1996, restore cross-ownership restrictions to reestablish media diversity in local media markets, and take antitrust action to break up the media monopolies. The Internet must be regulated as a public good and a basic right, open and accessible to all with net neutrality and personal privacy and data protected.

The movement for a free and open Internet with equal access for all has shown it has the political power to pass a new Telecommunications Act that ensures these rights. Net neutrality and other open Internet issues are supported across the political spectrum by more than 80% of the public. I will use my campaign to highlight and support the work of this movement.