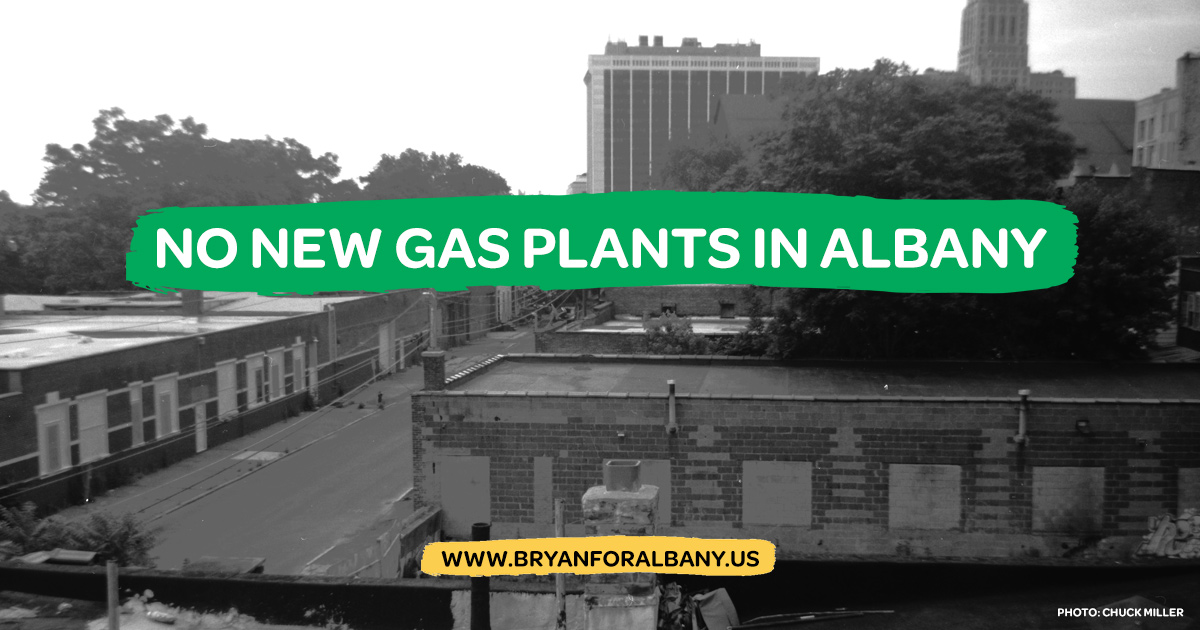 Bryan Jimenez, the Green Party candidate for Mayor in the City of Albany, said today that he opposed Governor Cuomo's plan to build new two gas plants in Sheridan Hollow to power the State Plaza.

"We need to stop building any more fossil fuel infrastructure, including plants to burn fracked natural gas, and instead invest in 100% clean, renewable energy. I urge the Governor to halt this project and go back to the drawing board, focusing on how to use geothermal / heat pumps, solar, wind and energy efficiency to power the Capitol of New York.

Jimenez noted that several months ago Kathy Sheehan told climate activists at a rally that the City was committed to 100% clean, renewable energy by 2035. Investing $100 million in building 2 new gas plants that will operate for 30 years is completely contradictory to that goal.

"The low-income neighborhoods in Sheridan Hollow and Arbor Hill have been subjected to decades of air pollution and noise to heat the Empire State Plaza. Enough is enough. We need a clean energy future for all our neighborhoods but especially those which have suffered from environmental injustice," added Jimenez.

The New York Public Authority, which is financing the plant, recently agreed to do a full Environmental Impact Statement under SEQRA after more than 100 organizations wrote to Cuomo to complained about the rapid push to build the gas plants, with little opportunity for meaningful public input. Jimenez said that the state should withdraw its present request for proposals and instead open it up to more comprehensive proposals exploring renewable energy alternatives.

"The Governor's people are quick to offer excuses why clean energy won't work. It is this mindset that is causing so much extreme weather and climate disruption. We need Albany as a state Capitol to be a model for the rest of the country. Cuomo wants a minor upgrade based on an existing steam heating system that is over a hundred years old. As Mayor I will insist on using new technology that moves us into the 21st century," said Jimenez.

The States of Oklahoma and Colorado already heat their capitols with geothermal energy, and Michigan will soon do so. St. Patrick's Cathedral in NYC recently starting using geothermal energy.

NYPA has told community residents that they want to provide electricity and heating / cooling using local energy sources. Yet their proposal does the opposite, burning gas that is fracked hundreds of miles away in Pennsylvania and elsewhere. Climate activists argue that the electricity to power state buildings can be provided from renewable energy systems distributed over a wider system, and that such a macro approach would improve grid reliability more than the microgrid Cuomo is proposing.

NYPA claims their proposal will reduce "emissions" yet they will actually burn more gas and increase carbon emissions. They have also failed to release the emissions data from the existing plants – which would continue to operate – and have refused to publicly release their Request for Proposals even though the state's FOI director Bob Freeman says they are legally required to do so. NYPA's own data shows that the alleged reductions in emissions would be minimal, not even in the ballpark of the limited 40% reduction in greenhouse emissions Cuomo has proposed for 2030.

"Greens are used to being several years ahead of politicians and the big environmental groups when it comes to issues like the environment, single payer health care or raising the minimum wage. When the Greens first began pushing to ban fracking we were attacked by the big enviros for being too extreme but fortunately the grassroots knew different. While Cuomo continues to view natural gas as a cheap bridge to a clean energy future, we view it as a gangplank to climate chaos," added Peter LaVenia, state party co-chair.

The Greens support moving to 100% clean, renewable energy by 2030. Such a Green New Deal would create millions of jobs nationwide, improve public health by reducing air pollution, and lower electric rates by 50% compared to continued reliance upon fossil fuels. The Greens also support a robust carbon tax to make polluters pay for the damage they cause by burning fossil fuels. Air pollution alone in NYS increases annual deaths by more than 3,000 while causing $30 billion plus in damages.

Jimenez also supports Albany joining a Community Choice Aggregation program to give local residents the ability to decide where to purchase power from, making it easier to transition to 100% clean renewable energy. CCAs are common in other parts of the country, and the first one in NYS started in Westchester County 18 months ago.

Jimenez said his administration would develop a comprehensive Climate Action Plan with concrete activities, timelines and benchmarks to achieve the transition to 100% clean energy. A few months ago the US Conference of Mayor urged cities to commit to 100% clean energy by 2035.