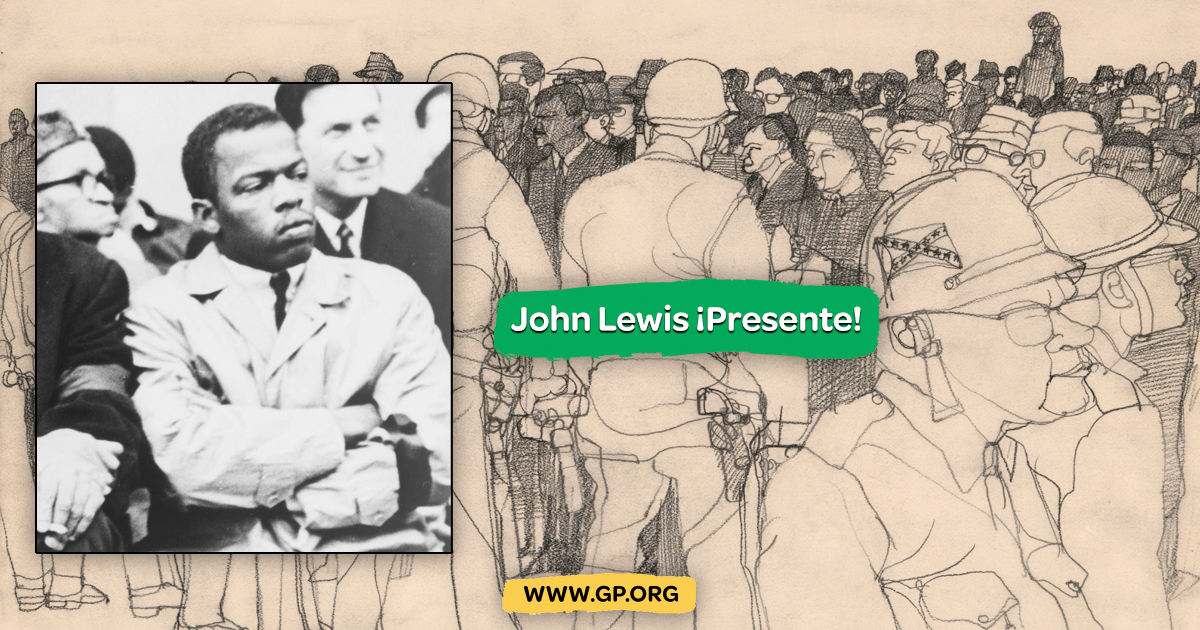 At the time, Lewis was chairman of the Student Nonviolent Coordinating Committee (SNCC), whose student actions included the sit-ins to desegregate lunch counters and movie theaters in Nashville. They started the Freedom Rides throughout the South to desegregate bus stations and register voters. Their buses were attacked and bombed, and they were beaten and killed.

Lewis helped spearhead one of the most seminal moments of the Civil Rights Movement. Rev. Hosea Williams, another notable Civil Rights leader, and John Lewis led over 600 peaceful, orderly protestors across the Edmund Pettus Bridge in Selma, Alabama on March 7, 1965. They intended to march from Selma to Montgomery to demonstrate the need for voting rights in the state. The marchers were attacked by Alabama state troopers in a brutal confrontation that became known as "Bloody Sunday." In the forefront of the march, John Lewis was the first to be beaten. He thought he was going to die. News broadcasts and photographs revealing the senseless cruelty of the segregated South helped hasten the passage of the Voting Rights Act of 1965.

Despite more than 40 arrests, physical attacks and serious injuries, John Lewis remained a devoted advocate of the philosophy of nonviolence.

Rep. John Lewis served his Georgia congressional district for 34 years with outstanding leadership in the House of Representatives and a stellar reputation for working across the aisle with Republicans for the common good. John was the recipient of numerous national and international awards.

While writing this memorial, I got a call from Boswell Books that our order of John Lewis’s bestselling, award winning graphic novel memoir trilogy MARCH had arrived. The MARCH series is used in schools across the country to teach the Civil Rights Movement to the next generation of young activists, and has been selected as a First-Year common reading text at many colleges and universities. What a legacy!

The last time that I saw Rep. John Lewis was about a year ago, in a Dulles Airport Terminal in DC. Hearing a crowd roar, I went to see what was happening and there was a modest John Lewis, a Lion of Civil Rights, departing a plane and moving through the crowd. With my big mouth, I gave him a huge shout-out, “Congressman John Lewis” and started clapping. Hundreds of people who knew and loved John Lewis joined in a thunderous applause until he got through the cheering crowd and out of the terminal.

George Martin, is a former Steering Committee of the Green Party, an activist, trainer and lecturer, serving the MLK Justice Coalition, Peace Action, Pace Bene Campaign Nonviolence, Liberty Tree Foundation and is a former Fellow of the MU Center for Peacemaking

Masthead images courtesy of the Library of Congress