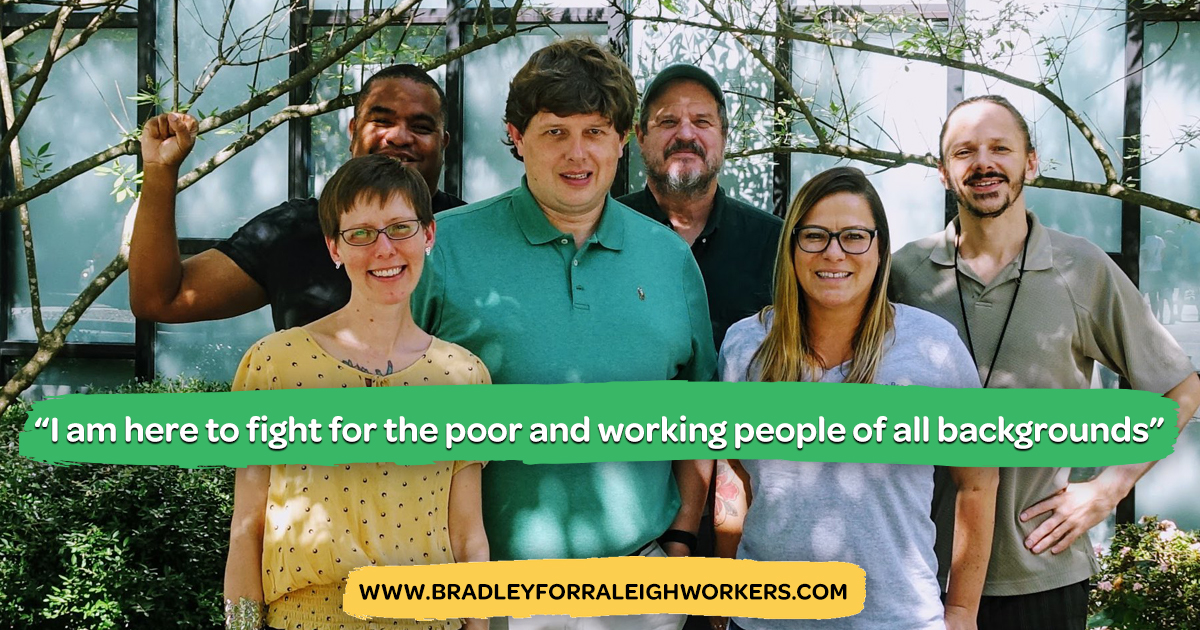 As I start up my campaign, I feel it is important to talk about some of the events that formed who I am, good and bad.  My name is Joshua Bradley and I am running for Raleigh City Council at Large this year. When I am elected I will fight for:

The good stuff is easy. I’ve been lucky in many ways. I had a great childhood and a close family. I’ve always had a caring circle of friends. I am married, in my opinion, to the best person in the world. I am proud to say that her son (my stepson) has grown up to be a great man.

I have worked in the hotel industry for the last 23 years. I have worked at the front desk as a night auditor. I have also been an operations manager, an assistant general manager, a human resources manager, and an accounting manager. The hotel industry has let me work with and serve a large variety of people in all circumstances from all around the world. None of these jobs are easy and all can require long hours. It has taught me the values of hard work and listening to people (when they are happy, sad, disappointed, or angry). One has to try to see things from others’ perspectives, be they guests or co-workers.

I have also been formed by the bad stuff. I dropped out of college in the middle of my sophomore year at NC State. I was not able to adjust well to living so far from home at a school with a larger population than the county where I was raised. I worked third shift at gas stations for a few years. I was desperately poor and so were my friends. During this time I made some bad decisions that would affect the rest of my life.

Twenty-six years ago, I was in a car accident while under the influence. It was the worst thing I have ever been directly responsible for. Fortunately, no one was seriously hurt. During the ensuing arrest, I ran (on foot) from the cops, resisted arrest, and damaged the squad car. I was restrained and taken to the hospital before being taken to the magistrate. I was convicted on four misdemeanors. I was fined, had my license taken for a year, and was given one year of probation. This series of events changed my life. I have learned from the irresponsible behavior of my youth and live my life in keeping with those lessons.

This experience taught me many things, in particular the double standard in law enforcement. If I was not white, I possibly would not be here to learn from my mistakes. There are far too many  examples of black, brown, and indigenous people being murdered for things like speeding, having a broken headlight, or for other small reasons that can be traced back to our system of inequality and the poverty that results from it. This has to stop, but it won’t if people don’t stand up to a system built on white supremacy.

This is also why I am here to fight for the poor and working people of all backgrounds who are fighting to live in our city. In truth, it is expensive to be poor in this society. Many people have their lives ruined, because although they work hard and the work is necessary, they are not paid a living wage that will cover rent, housing, transportation, childcare, and healthcare. I was extremely lucky to have friends and family who had the means to keep me off the streets after my troubles with the law. Often, people are not as lucky as I was. If the city wants to reduce crime, money would be better spent lifting people out of poverty than over-policing our communities. Affordable housing should be focused on the poor and unhoused before the well off. People who work low-wage jobs are an important part of our city and should be able to live in our city.

Eventually I was able to work my way up to get a decent-paying job. I met the love of my life and got married. But even as I worked toward better-paying jobs, it wasn’t easy, and even today I still don’t make enough to qualify for the “affordable housing” that is included with the Downtown South project.

In my many years of organizing—from the Occupy movement to working within the Democratic Party, and now to the Socialist Party USA and the North Carolina Green Party—I began to realize that both the Republican and Democratic Parties are ineffective and bought by the same corporate donors. I feel that lasting reforms for the working-class and poor people cannot be won without political independence from both parties of Wall Street and big developers. For example, during a pandemic of this scale, the government should be helping the people by focusing on Medicare for All, direct monthly payments to the people, and helping folks deal with life under quarantine. Instead, politicians have been focusing on aiding big business while leaving the rest of us hanging.

In 2019, I ran for Raleigh City Council in District A. I was the first socialist to run for city council in Raleigh in my lifetime and received a little over 10% of the vote as a political unknown. I ran a low-cost grassroots campaign to give voice to the working people of Raleigh.

I am running again to give voice to the poor and the workers of this city. I will fight to help organize the people and do what I can to make the city livable for all of its residents. Our campaign website will complete soon; check it out for our full campaign platform and upcoming events. If you have any questions, please let me know (but know that I work from 9 a.m. to 7 or 8 p.m.) and I would be happy to chat.