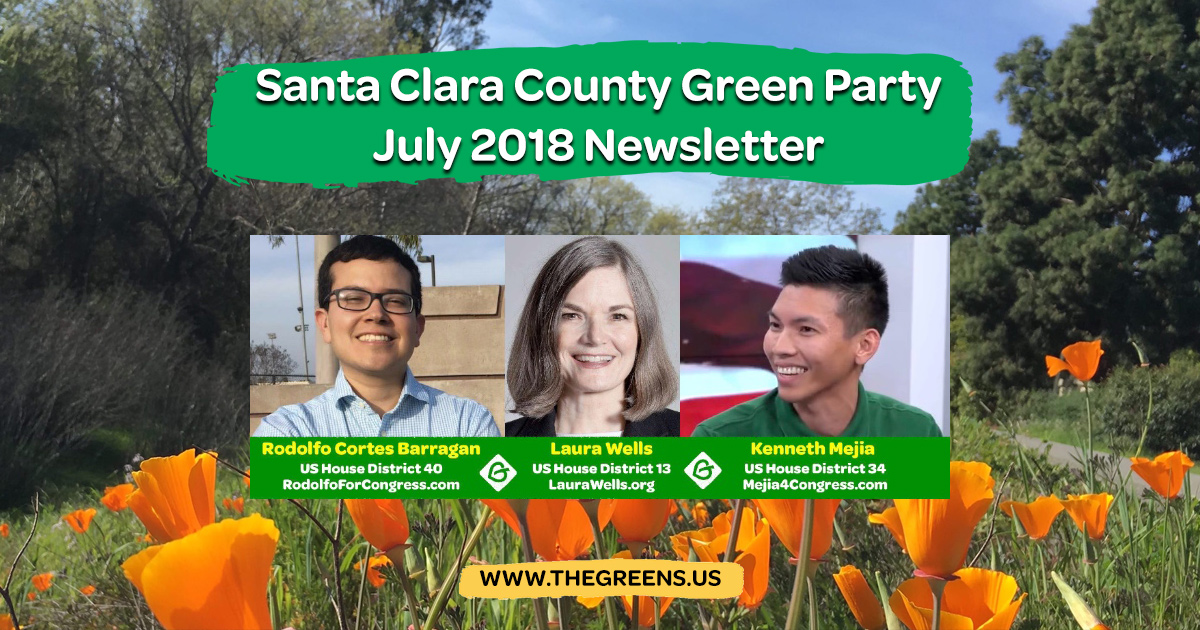 Congratulations to all THREE of our Green California candidates, Laura Wells, Kenneth Mejia and Rodolfo Cortes Barragan for breaking through the Top Two stranglehold on our democracy! They are all moving on to the November 6th General Elections!
The Green Party of California is working hard to mount a statewide campaign and organize volunteers behind our fine candidates and YOU CAN HELP!

Please DONATE to our candidates, volunteer to phone bank or text bank and advocate for them on social media. We Greens have to be our own media because main stream corporate media has locked us out of the conversation for decades. Help us turn our government GREEN! #WeAreGreen

Join the Santa Clara Greens and march at the Rose, White, and Blue Parade on it's 11th anniversary. Our theme this year is World Peace and Tech, so come out and see our brand new banner specially made for this parade! Wear your Greens swag proudly and help us bring the Green's message of peace and community to the attendants.

We assemble at 9:30 at 555 Dana Avenue (parking lot across from Lincoln High) San José
The parade goes travels down The Alameda 10 am - 12 noon
Program and Festival: 2:30 - 3 pm
At picnic area in front of Westminster Church

This is a much-beloved annual event in San Jose’s Rose Garden–area neighborhoods along The Alameda, which has a rich history of parades, including the Carnival of Roses and the Fiesta De las Rosas. learn more at: https://www.rwbsj.org

Stop by our Table at the San Francisco Mime Troupe's Show
Then see the FREE Performance:
"Seeing Red; A Time-Traveling Musical"

SC Greens will be at other shows in August and September!

Join the Santa Clara County Greens at the San Francisco Mime Troupe's NEW SHOW: "Seeing Red: A time-traveling Musical". We will be tabling starting an hour before the music starts at 5:30 pm to distribute literature and information about our amazing congressional candidates on the November 6th Ballot! Join us and spread the Green message! See our Facebook event page.

"The never silent, hilariously thought-provoking,Tony and OBIE award-winning San Francisco Mime Troupe, celebrates its 60th anniversary of revolutionary theatre with an anthology of scripts from 2000 - 2016. From the War on Terror to the War on Drugs, from genetically modified foods to financially modified democracy, from corporate personhood to Occupy to Trump - the Troupe has dealt with the issues of the day with its particular brand of outrageous, hard-hitting political musical comedies, tragedies, farces, and melodramas. Speaking truth to power, giving voice to the voiceless, comforting the afflicted, afflicting the comfortable, this collection of scripts is being provided - including introductions to the plays, photos, fan quotes, and artists biographies - at price every fan, supporter, student, historian, and comrade of the Troupe can afford... FREE!

The show is FREE and the suggested donation is $20." Learn more about SFMT at: http://www.sfmt.org/index.php

The Repeal of Costa Hawkins is on the November 6th Ballot!
Join us to spread the word!

Santa Clara Greens are gearing up to campaign all the way to November both for our amazing candidates and also to REPEAL COSTA HAWKINS. The 1995 Costa-Hawkins Rental Housing Act (AB 1164; codified in California Civil Code Sections 1954.50) has been a disaster for rent control and renters' rights in California, it has significantly limited CA cities' ability to implement rent control and has also eliminated vacancy controls.

The Repeal, also known as the "The Affordable Housing Act” has made it to the November Ballot after many rent control advocates mounted major signature collection efforts in the last few months.

Please help us advocate for the Repeal of the Costa Hawkins Act, and share this information with your family, friends and communities.

Learn more at:
Affordable Housing Act campaign
The Repeal of Costa Hawkins Initiative on the Ballot
Tenants Together Organization

July 23 - Political Revolution Reading Group  - 7 - 9 pm, San José Peace and Justice Center, 48 S. 7th St. San Jose. Group will be discussing The Color of Law by Richard Rothstein, published in 2017, it is an indispensable primer on the history of housing segregation in America.