June 2021 News from the EcoAction Committee 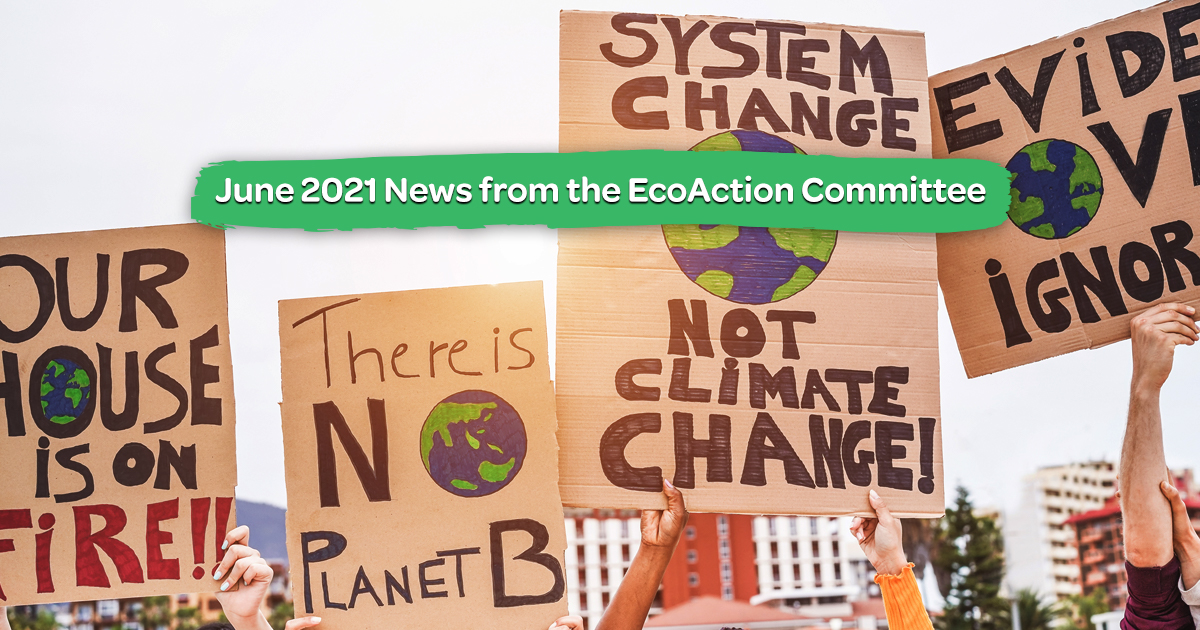 We need more greens to help. If you are interested, you could see about becoming an appointee by your state. We are also recruiting volunteers to help out with the committees / working groups (Green New Deal, Education) and tasks (social media, database, outreach). Please contact [email protected] for more info or if you would like to help.

This working group seeks to impact on issues related to enacting an Ecosocialist Green New Deal as we first proposed in the US in 2010. That means moving to 100% clean renewable energy for everything by 2030 along with zero greenhouse gas emissions. It includes an Economic Bill of Rights (single payer health care, living wage jobs for all, free education, housing). We need system change, replacing capitalism and its focus on profits for the few with ecosocialism that includes public ownership and democratic control of our energy and economic system. 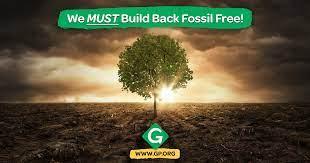 EcoAction endorsed the ClimatePresident.org campaign to get Biden to declare a climate emergency and to issue Executive Orders on a host of climate issues (halt fossil fuels, develop renewable energy). Biden did put out a series of Executive Orders on climate. While some good stuff, many critical things were missing, especially re halting fossil fuels. See Green Party release.

The major national climate initiative will be Biden’s so-called Green Economic Stimulus, an initial $2.3 trillion over 8 years that continues to shrink and was never strong on climate (and fight over a clean energy standard.) The Green Party issued a release calling for $4.1 trillion a year for a decade based on Howie Hawkins’ call during the 2020 presidential campaign for a $2.7 trillion Green New Deal and a $1.4 trillion Bill of Economic Bill of Rights. Groups like Center for Biological Diversity have called for $4 Trillion a year for 4 years while mainstream climate groups are pushing THRIVEAgenda.org for a $1 trillion a year for a decade for climate, with an emphasis on EJ funding and union jobs.

Earth Day to May Day 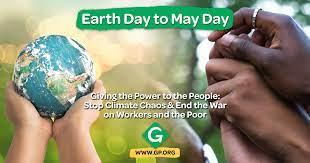 The EcoAction Committee helped organize events and protests between Earth Day and May Day, highlighting the need for action and the interconnection between climate, black lives matter, economic justice, military, racial justice, worker rights, immigrants, GLBTQ and other green issues. EcoAction helped initiate a forum along with the Green Peace and Action Committee onClimate and the Military (Madelyn Hoffman, NJ Greens Gubernatorial candidate and longtime former Director of NJ Peace Action; David Swanson of World Beyond War; and Delilah Barrios of Texas Greens) and worked with Howie Hawkins on Nuclear is a False Climate Solution (with Harvey Wasserman and Marilyn Elie, who successfully helped shut down Indian Point).

The “Last Chance COP”  - The UN Climate Change Secretariat’s 26th Conference of Parties (COP26) – is scheduled to be held in Glasgow, Scotland in November 2021. Global Greens, which represents Green Parties throughout the world, has set up a working group to try to maximize the impact of the Green delegation at the meeting, with a focus on taking the steps needed to keep global warming below 1.5 degree C and to ensure that the industrial polluting countries make reparations to the Global South for its role in driving climate change and assist them in adequately responding to global warming.

The Global Greens have held three webinars so far (links below to videos):

On April 20, the Greens talked about what needed to happen at Biden’s Earth Day Summit,  The panelists were the Minister of Climate from New Zealand, James Shaw; Dr. Frank Hibeneza MP, the leader of the Democratic Green Party of Rwanda; Silvia Vasquez,  leader of the Argentinian Greens, and UK Parliament Green member Caroline Lucas. (EcoAction helped issue a GP release before the summit.)

The Green 7 Confront the Burning Questions of the G7 Summit. Took place on June 10. Moderated by economist and former Member of the European Parliament Molly Scott Cato, the forum highlighted Green leadership on two key Green demands from G7 and COP26 – Carbon Tax and Dividend, and Climate Justice – as well as provided a platform for voices from the Global South that are typically excluded from G7 deliberations. Note: The Summit waffled on how to deal with the European Union’s plan to impose a carbon feeon imports and merely agreed to some day fulfill their existing climate funding pledges. 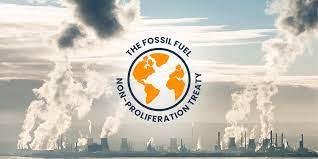 Global Greens are promoting the fossil fuel non-proliferation treaty (FFNPT) initiative. It’s modelled on the landmark UN Treaty on the Non-Proliferation of Nuclear Weapons agreed in the 1960s, and is built around the same three pillars: non-proliferation, disarmament and peaceful use. The fossil fuel treaty would prevent new exploration and production, phase out existing stockpiles, fast track the transfer of clean energy to poorer nations, enable a just transition for workers and communities, and support economic diversification in countries still dependent on fossil fuels.

The Federal Energy Regulatory Commission (FERC) plays a key role in the rapid expansion of interstate fossil fuel infrastructure such as fracked gas and oil pipelines. FERC is tasked with the permitting and regulation of all energy projects that cross state lines. The GOP presently controls FERC 3 to 2 but Biden shortly gets to appoint a new person and switch control. From Beyond Extreme Energy: The names floated as possible new FERC commissioners are not promising, reflecting numerous ties to both fossil fuels and false solution schemes. We demand that Biden take a stand against false solutions and appoint a new FERC commissioner committed to decarbonization and a rapid  transition to 100% renewables. Organizations can sign onto a letter to Biden here.

The Climate Problem Presented by CryptoCurrency

The Co-Chair of the EcoAction Committee spoke on June 5th at a rally in the Finger Lakes in upstate NY opposing the reopening and expansion of an old coal power plant to burn fracked gas to support crypto currency, which has rapidly become a major contributor to global greenhouse gas emissions. 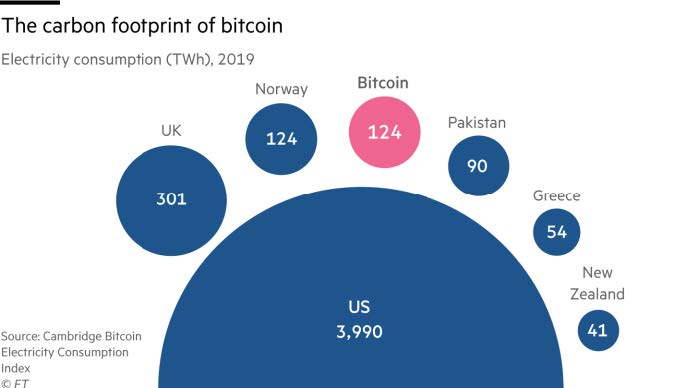 Cryptomining is a relatively new technology that provides the basis for cryptocurrency.  Cryptocurrencies such as Bitcoin are virtual currencies, which means they exist only online. Digital currencies require authentication to prevent fraudulent transactions. Proof-of-Work (PoW) is the method that has the most significant energy demands. In PoW authentication, complex mathematical equations are assigned to each transaction and miners compete to solve them. The first one to solve an equation authenticates the transaction and wins currency for their effort. The equations can only be solved by brute force guesswork, so the person or company with the most computational power wins the most currency. With some currencies valued at over $36,000 a coin, albeit in a highly speculative market, a global digital gold rush is taking place with hundreds of millions of computers competing for an edge in the market.

In New York, data mining operations using warehouses full of computers have set up shop in upstate areas siphoning electricity from New York’s grid and jeopardizing the state’s progress on and meeting mandates for reducing greenhouse gas emissions. A Finger Lakes data mining facility is looking to expand from using some 10,000 computers to as many as 30,000. A recent analysis by Cambridge University researchers determined that electricity use for the cumulative digital currency mining operations across the globe exceeds that of some developed nations like Ireland.  Additionally, there are very few jobs created by this industry, with profits accruing to the few, but the environmental impacts affecting us all, particularly BIPOC communities that are often located near fossil fuel power plants.