The Knox Greens show solidarity while having a great time at the Pride Parade. We have been participating in Knoxville Pride since its beginnings. Our first local Green Party candidate we met at Pride Norris Dryer. He was an inspiration to us all. He was the first openly gay candidate for Knoxville City Council. 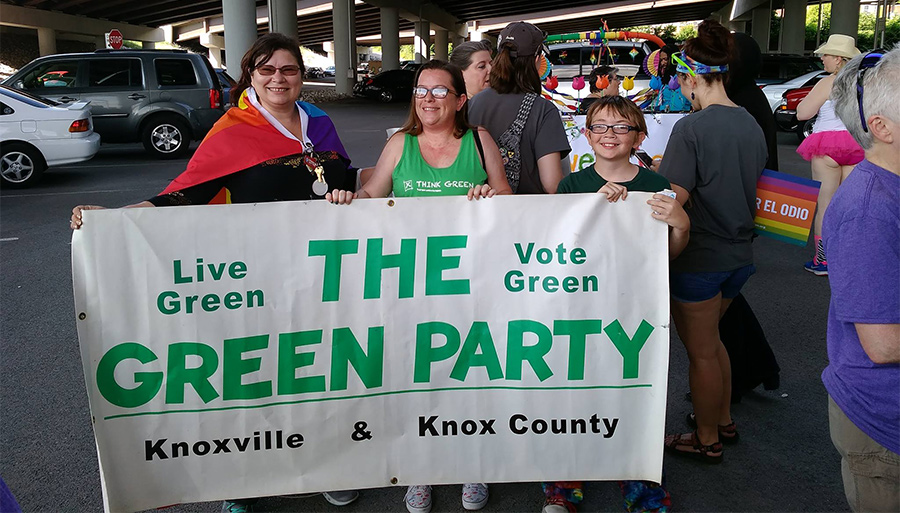 The Green Party of Knox County has decided by unanimous consent to endorse three candidates for Knoxville City Council: Rebecca Parr in the 1st District, Seema Singh Perez in 3rd District, and Amelia Parker in 4th District. Please check out their information and consider supporting these excellent candidates. (Seema and Amelia are both part of the 2017 City Council Movement which is examined in greater detail in the following article.)

There are exciting things afoot in the Knoxville city council race! As you probably know, five of the nine city council seats are up for election this year, and ALL of those five seats are term-limited. That means there are no incumbents running this year. The 2017 election will install five new faces on the city council - a potential majority voting block. This is a huge opportunity for inhabitants of Knoxville, and the 2017 City Council Movement is dedicated to making sure those five new faces are accountable to the people.

The 2017 City Council Movement is an outgrowth of the political caucus of Rescue and Restoration, a grassroots organization dedicated to rescuing the most vulnerable residents in Knoxville from disastrous public policy and restoring the African American community to its former glory. In its mission statement, the Movement's Manifesto declares that, "It is time to open the local budget process for public input and transparency regarding how public funds are spent. It is past time to bring community voices into political decision making. As local residents and engaged voters who live, work, and pay taxes in this city, we publicly declare that 'we the people' know best how to run and make decisions for our own communities."

The Movement's goals are two-fold. First, the goal is to elect candidates that will fight for the greater good of Knoxville's residents, particularly those residents who are the most vulnerable politically and economically. This will involve fighting AGAINST outside corporate influence in local governance and against the forces of gentrification. Second, it is to establish enduring mechanisms for accountability and public oversight through participatory budgeting, public forums, and workshops. It is not enough to publish policies on a website and claim the process was transparent. Real transparency demands outreach, popular education, and public input into policy decisions BEFORE they are set in stone. Knowledge is power, and these accountability mechanisms will ensure that the people have the power to make their voices heard - that no matter who gets elected in the future, public officials will have to listen to the will of the people.

Check out the 2017 City Council Movement on facebook and consider volunteering your labor and your money. There are ongoing opportunities to go door-to-door with the candidates and talk to people face-to-face about local issues. We are also phone-banking twice per week, if walking is not your thing. (It's a lot of fun if you do it in a group.) Here is a link to the Movement's secure paypal account.