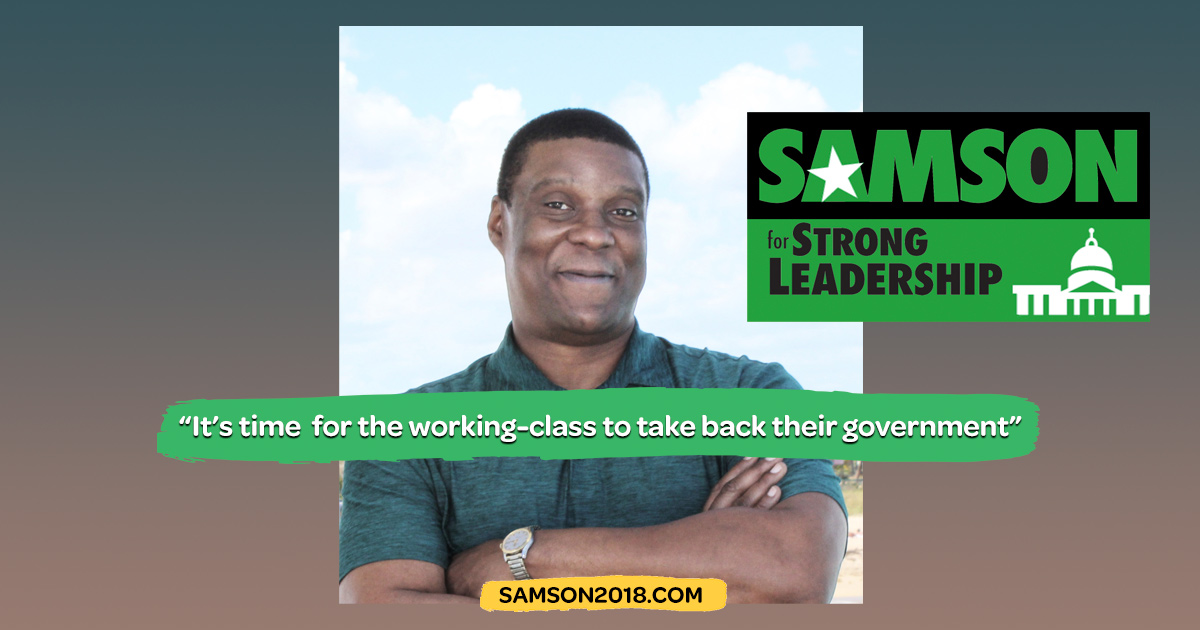 Two candidates are competing in the Nov. 6 election for a seat in the Florida House of Representatives to represent District 87, which includes Greenacres, Lake Clarke Shores, Lake Worth, Palm Springs and Westgate. It is the first time in a long time that the seat is being contested in a general election, with recent challenges ending after primary elections saw the winner unopposed in the general.

Samson LeBeau Kpadenou, a waiter and progressive labor activist representing the Green Party, will challenge incumbent David Silvers, an attorney and publisher in the Democratic Party who has held the seat since 2016.

Kpadenou said he was never interested in politics, having worked in the restaurant business most of his life, until recently.

“The biggest challenges in the district from my community outreach events have been mental health, affordable and workforce housing and steady economic drivers,” he said. “You go through parts of the district and you see the shopping centers that are half empty, and that’s not good.”

Both candidates expressed concern for most of the same issues — affordable housing, education, the environment and mental health — with some key differences on order of importance and how they would approach them.

Kpadenou called attention to environmental issues facing the state and specifically coastal communities and those near the coasts.

“I don’t want to sound cliche being in the Green Party, but first of all is the environment,” he said. “We’ve got rising sea levels, which nobody denies. [...] We have sunny day flooding in Miami and that’s moving up the coast and no one can deny that. And while some do deny climate change, I don’t know how credible that can be in the state of Florida when you see the severity of these storms increasing year over year. [Hurricane] Michael hit up north, Irma was not too long ago and it’s going to continue to get worse.”

He also said he would declare a public housing emergency for the state.

He also drew attention to “an old issue that’s new again,” referring to abortion. He said that if Roe v. Wade is overturned in the Supreme Court, states would then be able to decide whether people in each state would have the right to an abortion.

Silvers expressed a desire to work on mental health, affordable housing and education reform, among other issues. He said that a combination of factors including his work with the Department of Children and Families and with Republican colleagues in the state house has resulted in DCF asking him to bring a bill to the floor that initially died, but that he hopes to get passed next session if he is reelected. It would require a certain level of psychotropic medication to be in jails so that defendants can stand trial.

He said the nexus of mental health, school safety and gun violence is one that cannot be ignored and must be addressed more aggressively.

“Look at what happened in Parkland,” he said. “You have somebody that was clearly disturbed and that had needed mental health assistance and, unfortunately, Nikolas Cruz fell through the cracks. Perhaps if there was a full-time mental health counselor at the high school where he went to school or middle school, maybe he could have gotten help at a much earlier stage.”

Silvers discussed the importance of addressing environmental risks and disasters, notably rising sea levels and the increasing strength of hurricanes.

“As someone who was born and raised in South Florida, this is my home,” he said. “And to see hurricanes come here and get stronger every year — I was born pretty much right before a hurricane and I’ve lived through dozens of them — to see your fellow Floridians suffer the way that they suffer now in the panhandle, who suffered here in 2005 when [Hurricanes] Wilma, Rita, Katrina hit us all back to back to back, it’s very difficult to see that and to see leadership up in Tallahassee, especially a governor, that doesn’t accept sea- level rise, that doesn’t accept that these storms are getting bigger and getting stronger, maybe making the environment a priority, maybe making sea-level rise a priority.”

As of Oct. 18, Kpadenou has raised $10,092 from about 30 donors at an average of about $288 each and Silvers has raised $145,580 from over 220 donors at an average of about $644 each. Kpadenou’s contributions are almost entirely from individuals, with one from his own party. Contributions to Silvers come from a variety of sources including individuals, political action committees, agricultural companies, energy companies, insurance companies, real estate companies, police and fire associations and law firms.