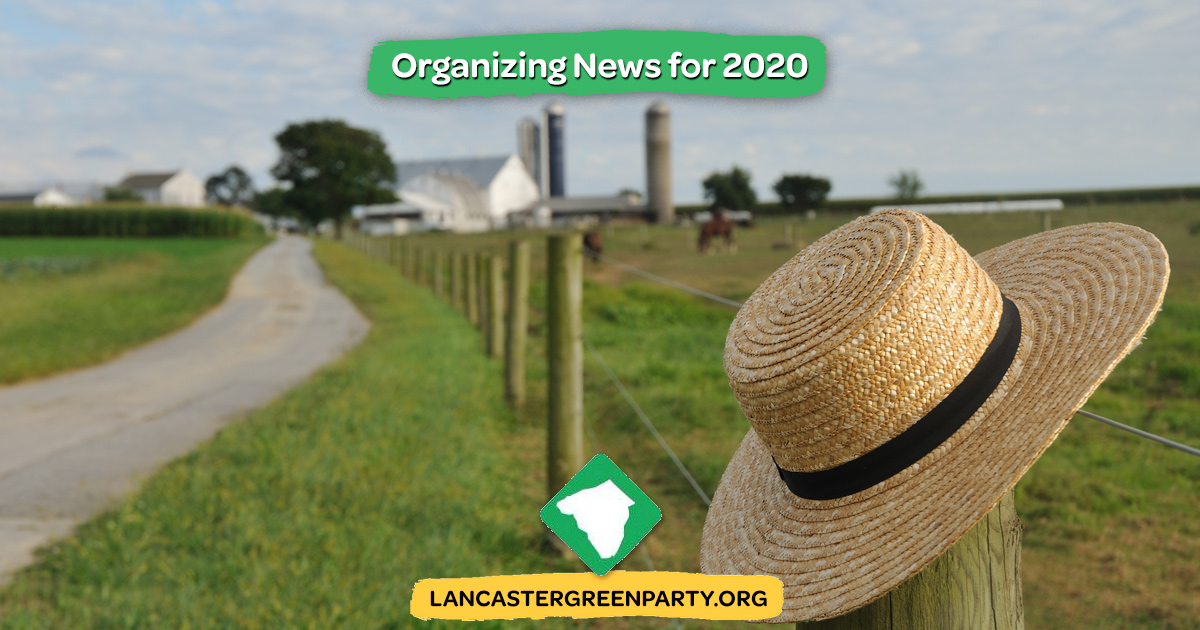 LANCASTER, Pa – The end of 2019 has nearly come so here is a brief synopsis of what 2020 may look like for Green actions in the County/Region.

First, I will point out that January is typically the time for the Lancaster Green Party to elect County Officers and State Delegates. January also includes opportunities to fill positions for national delegations/committees from the Green Party of Pennsylvania (GPPA). The next online State Committee Meeting is January 12 (RSVP here). Therefore, Lancaster Greens should meet once in the weeks leading up to that meeting. Additional to officer and delegate elections, Lancaster Greens are encouraged to work through updating our County Platform. Look forward to a future announcement for a January meeting date to kick off 2020!

Second, during the last state meeting a draft caucus and delegation plan was prepared to detail how the Green Party of Pennsylvania will elect our presidential nominee. Feel free to reach out to me for exact details; however, the meat of the plan consists of holding a series of County Caucuses throughout Pennsylvania during the Month of April. Registered Greens from Pennsylvania may participate in one County Caucus, no matter where the location. It is likely that vote by mail ballots will be made for those folks what cannot make a County Caucus event. Multiple candidates are working for the GPUS nomination and more information about them can be found at the GPUS 2020 website. The GPPA will announce details on the Caucus plan early next year; however, please plan for Lancaster to host one Caucus in the County during April and it is likely that we will support a 2nd regional Caucus in the Harrisburg area.

Third, I will point out that participation with the Lancaster Greens has been low this past year. It is expected that 2020 will be even more difficult. However, what we have seen is that our members are actively participating in people's movement organizations that are having real affect with the social and political structures of our communities. During the past year our membership has been supporting the work of tremendous groups like that of Put People's First! PA, March on Harrisburg, Sunrise Movement, and A Better Path Coalition. This is the exact work we should be doing, supporting the grassroots efforts of our communities. The goal of supporting a political alternative starts with building these relationships and we encourage you to continue doing so. Just remember to #BeSeenBeingGreen while you do so. We're always looking to showcase this good work in our GreenStar newsletter.

Finally, I want to leave you with this general outline for next year's events.