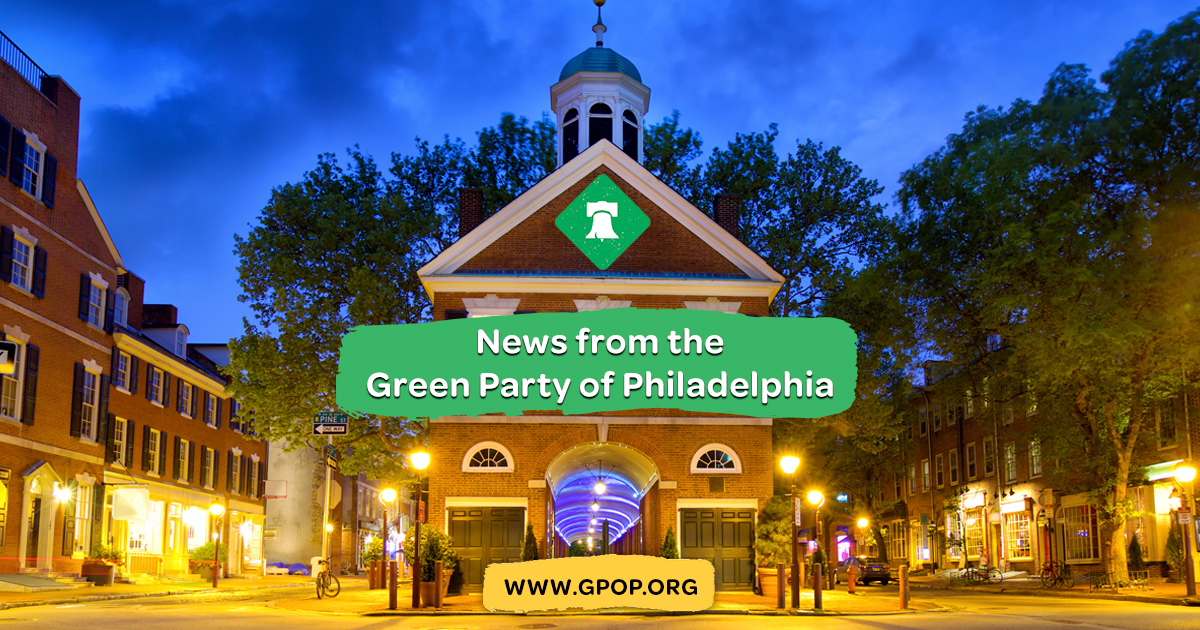 Here's a rundown of what happened at the most recent General Membership meeting of the Green Party of Philadelphia (GPOP). There is no General Membership meeting in December, but at our January meeting we will hear from candidates for both our 2019 City Committee (like a steering committee) and nominations for 2019 elections, including City Council.

Election Report
Chris reported on the recent election. We had much better results at the polls that had Green Party volunteers. However we didn’t have many volunteers. Paul Glover missed a paperwork deadline resulting in a fine. It has been suggested that GPOP help pay the fine but Chris reminded them that we had already held a fundraiser and donated some of our own budget to the campaign already. Membership in GPOP as of the election is 1566, up 49 since the primary.

Harrisburg Meeting
GPPA treasurer Tim Runkle presented a budget proposal.
New bylaws were passed which state that there will be two co-chairs serving staggered 2 year terms.
Another bylaw states that county parties must register with GPPA. Robert to follow up.

Budget
Currently our account is at $810.70.
Jarrett needs to get new checks, the expense is approved.

City Committee Meeting Schedule
We agree to do arrange conference calls when we will not achieve quorum. In February after a new City Committee is elected in February they will evaluate if there would be a more convenient night to meet.

Margie
Current Membership Secretary Margie Neary has confirmed that she can’t participate any more at this time. We agree to fill her position in February rather than holding an election for a term that’s almost over.

Kenneth Mejia
Francis brought up the recent election and the success of Kenneth Mejia and other California Greens. He suggests that we ask them for tips on how they ran their campaigns. Robert points out a higher number of volunteers and the ability for candidates to go further left. Galen mentioned talking to Mejia and said they have a lot of technology for text alerts and messaging and a team of 35 youth. Eric noted that CA has a runoff system that resulted in Mejia being up against just one other candidate who was a Democrat.

Website Budget
We would like to hire someone to build the remaining pages. Christian is going to get a quote from Nation Builder on custom design assistance by the next CC meeting. Charles suggests a web committee consisting of himself, Georgie, Christian, and Adam.

Brian Abernathy
Abolish ICE is circulating a letter calling for the removal of Brian Abernathy, Deputy Managing Director of Philadelphia on grounds of corruption and not serving the public interest, including communicating with ICE and using eminent domain to push people from their businesses. Robert asks GPOP to endorse the letter, approved.

Upcoming Elections
In February we will hold elections for both our new City Committee and for our nominations for Green candidates for City Council and other 2019 elections. Interested candidates should be present at both the January and February general meetings to be considered. (Candidates also must be registered Greens who live in Philadelphia.) Current GPOP chair Olivia Faison expressed intentions to run for City Council Member-at-Large and received the support of those present but it was decided that official nominations will be elected in February so other potential candidates and interested voters can be made aware of the election.

Events
12/10 Coalition to End the War at Home and Abroad will be meeting at noon at Liberty Resources. GPOP will be represented by our chair, Olivia.

1/24 General Membership Meeting 7pm, location TBD
**THOSE INTERESTED IN RUNNING IN THE FOLLOWING MEETING’S ELECTION MUST BE PRESENT AT THIS MEETING TO BE CONSIDERED**