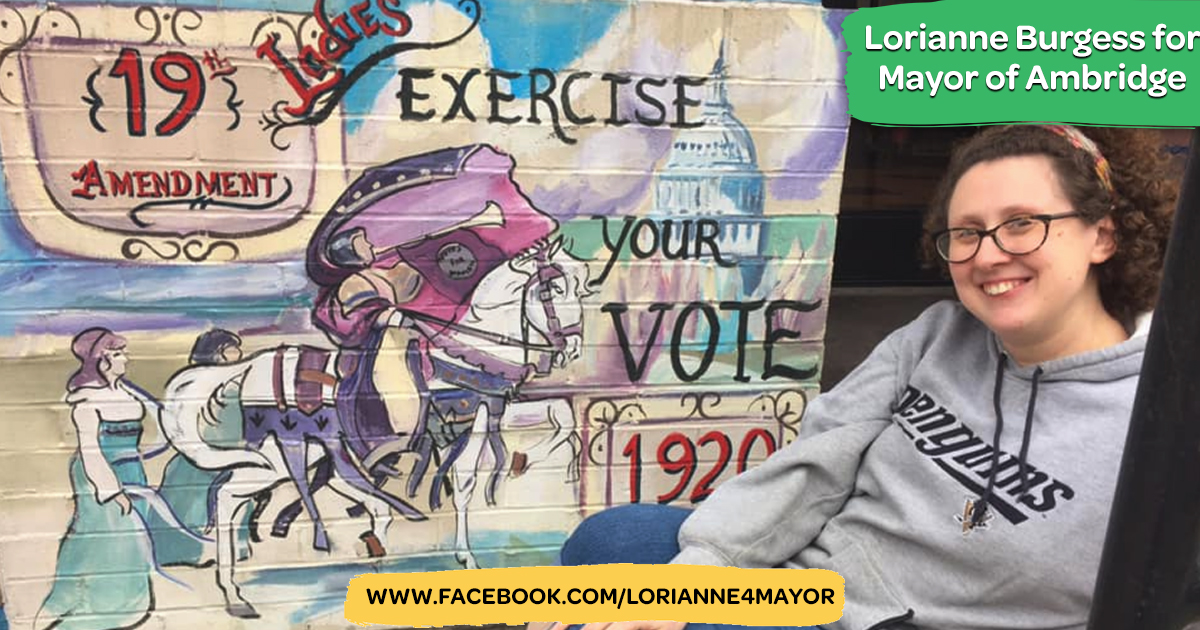 Here are the answers which Lorianne Burgess gave to some voter questions:

Q. -- How have you been involved in the Ambridge Boro community?

A. Lorianne Burgess -- I am a widowed mother of two children, and I have lived in Ambridge my entire life. I graduated from Ambridge High School. I understand the struggles of the people in our community. I talk to so many of my fellow citizens every day, in my bakery and walking down the street. I believe that there is something beautiful on every single block of this amazing town. There are genuinely wonderful folks in every corner of this diverse, inspiring melting pot of a community that we have the supreme privilege to be a part of. I wouldn’t live anywhere else.

Following in the footsteps of my older family members, I have been involved in community groups, happily giving back to our town. I have been involved in Girl Scouts, CCBA, helping out when I’ve been able to. I own and run Stangl’s Bakery, which has been in my family for over 100 years. I have served as president of the Ambridge Area Chamber of Commerce, and I currently serve as president of Ambridge Crime Watch.

Q. -- Why are you running for Mayor of Ambridge Boro?

A. Lorianne Burgess -- For quite a long time, there has been a lack of energy and community presence, in the office of Ambridge Mayor. I know quite a few people that have never met an Ambridge mayor, which is someone that should be out, meeting folks, and the face of a community.

Q. -- What sets you apart from the other candidates for Mayor?

A. Lorianne Burgess -- I view myself as a very socially liberal person. I believe in equality. I pride myself in being a very caring person, without being naive. I have earned the trust of many of the pillars of the Ambridge community. I am approachable for young and old alike. I am always working on my conflict resolution skills, and I really want to bring “being neighborly” back!

Q. -- What is the largest challenge facing Ambridge, and how will you approach it?

A. Lorianne Burgess -- I think we have two major issues that need to be worked on, both equally important. One is that we need to bridge the ˜trust gap” between the police department and the community. Some really good steps have been taken toward accomplishing this, but we still need to work on it. The officers need outlets to engage with youth and charitable organizations. The other issue that we must address is, of course, our drug epidemic, which goes hand in hand with the mental health epidemic.

Q. -- What will be your top priorities as mayor?

A. Lorianne Burgess -- As mayor, I want to put a fresh face of hope on our town. I don’t think the town needs another get-off-my-lawn old white man, in the mayor’s office. As a business owner in Ambridge, I have seen some hard times. We have had to really hustle and be creative. I think that’s what Ambridge needs: creativity and determination. We have some positive momentum, and it needs to be fed. With the right energy Ambridge could definitely see more positive things happen in the years to come.

Q. -- Why are you running for Mayor as a Green Party Candidate?

A. Lorianne Burgess -- The transparency is one of the best parts of the Green Party for me. The Green Party is the party with the most accountability. There are no string-pullers. I owe no favors. Should you vote for your party, or for what you believe in? I can do both with total confidence.