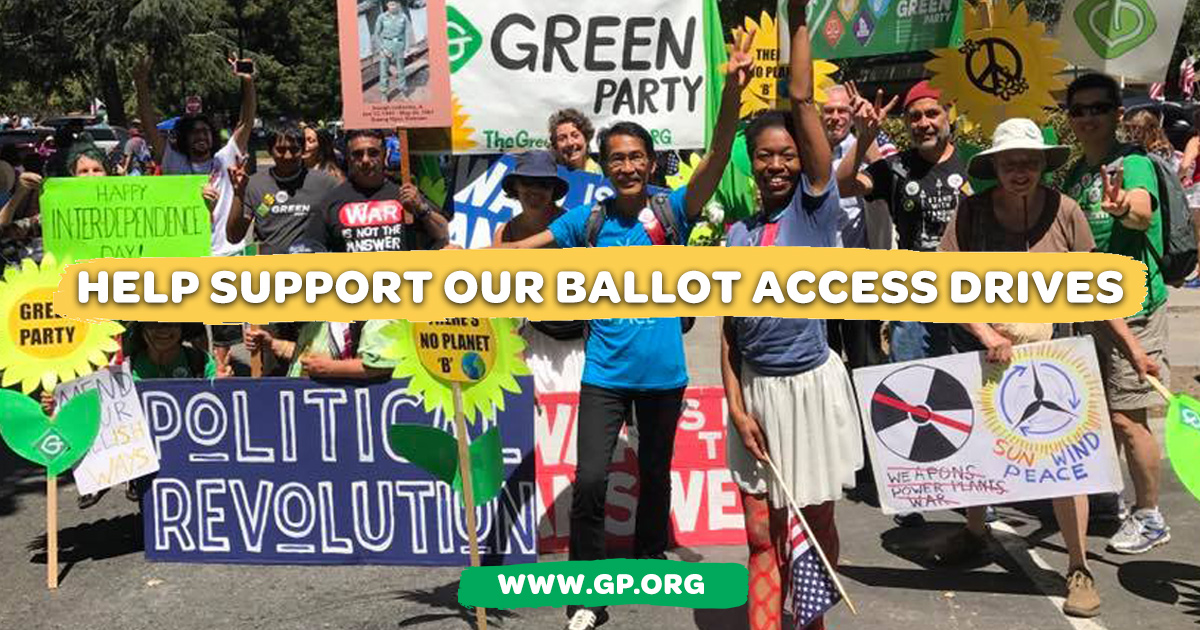 Last year, your donations helped our Presidential ticket get on the ballot in 45 states, which was a Green Party record.

Across the country, 89% of voters had Jill Stein and Ajamu Baraka on their ballot. On Election Day, nearly 1.5 million voters gave their support to the only national party for single payer, ending student debt, and the Green New Deal.

The Green Party of Missouri retained full party status after the election for the first time ever. The party ran a slate of statewide candidates, as well as candidates for Congress and the State Legislature. Jennifer Leach won enough votes in her campaign for Lieutenant Governor to retain full party status. She was able to get on the ballot thanks to the support of donors like you.

Earlier this year, with help from the national Green Party, Utah succeeded with its petition drive. The state party looks forward to recruiting candidates so it can retain ballot status next year.

The Green Party of North Carolina won a huge victory in October when its lobbying efforts for better ballot access legislation came to fruition. The State Legislature passed a new low that lowered the statewide petition requirement from about 94,000 signatures to fewer than 12,000. The new legislation not only makes it much easier to run statewide candidates, but also for down-ticket races as well.

The national Green Party's Ballot Access Committee made a grant of $5,000 this year to the state party to help complete its petition drive. North Carolina is one of the handful of states where the Green Party has never been on the ballot. Thanks to your donations, voters will have the chance to go Green in the Tar Heel State for the first time ever.

Please give today to help us give more to states. Every dollar you donate today goes directly to ballot access efforts.

We look forward to more successes in 2018. Last year, Jill Stein petitioned onto the ballot in Montana. The Green Party of Montana plans to follow up on her success by completing the petition to get ballot access for the entire party for 2018. If we get 5,000 valid signatures in Montana by March 15, and our candidate for Clerk of the Supreme Court gets enough votes in November, we'll be on the ballot through 2022! Your donations can help us get there.

P.S. - Help us reach a first! Your donation can help us in states like Indiana, Oklahoma and Georgia where we have never been on the ballot.