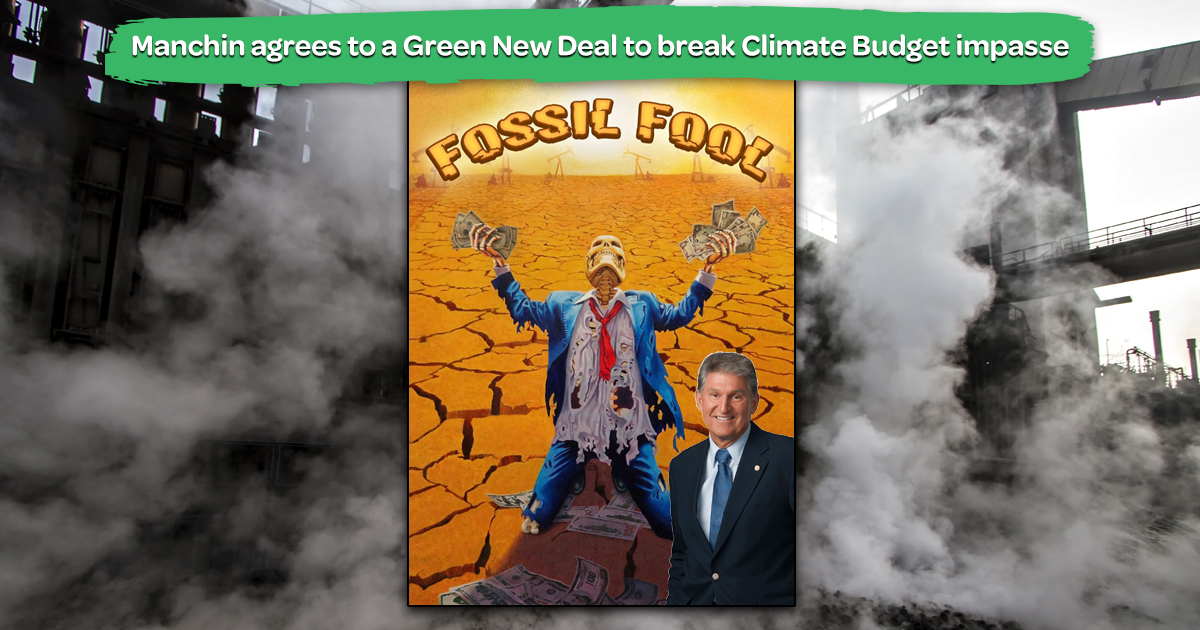 Senator Joe Manchin, in a stunning reversal, announced today that he is selling all his holdings in coal companies and wants to replace President Biden’s Build Back Better proposal with a more robust Green New Deal.

“I finally got around to reading the reports from the IPCC and I was stunned to learn how fast climate change is occurring. My ten grandchildren also really opened up my eyes about the need to give their generation a chance for a decent living. It is never too late to admit that you have made a mistake,” said Manchin.

Manchin said he was also convinced by the coal miners’ union, which for the last year have been calling to move away from coal and other fossil fuels in exchange for a “true energy transition" that includes thousands of jobs in renewable energy.

Manchin sheepishly admitted, “while I have been telling the American people for the last two years that I was fighting for the people of West Virginia, the reality is that most voters in my state actually wanted me to support investments in renewable energy as a way to produce good paying jobs while curbing extreme weather.”

Manchin said that while he would vote for the present Build Back Better legislation, he said he planned to ask Senator Schumer to move a much larger climate and social justice funding bill along the lines of the original Green New Deal proposed by the Green Party back in 2010.

“The invasion of Ukraine has convinced me of the need to put an end to wars over fossil fuels. Renewable energy and energy efficiency are the way to peace. And we have to ensure that everyone benefits from the transition to a clean energy future, from the existing fossil fuel workers to the environmental justice communities most harmed by our burning of fossil fuels,” added Manchin.

Manchin said he no longer wanted to be a fossil fool and would stop accepting any donations from the fossil fuel industry. Manchin has been the largest recipient of fossil fuel funds in Congress. “I realize now that I owe my vote to the people of my state, not to greedy fossil fuel CEOs who have pushing scams like carbon capture technology and net zero,” a chastened Manchin admitted.

Fossil Fool Day.
EcoAction Committee of the Green Party of the U.S.