Maryland Green Party News for May 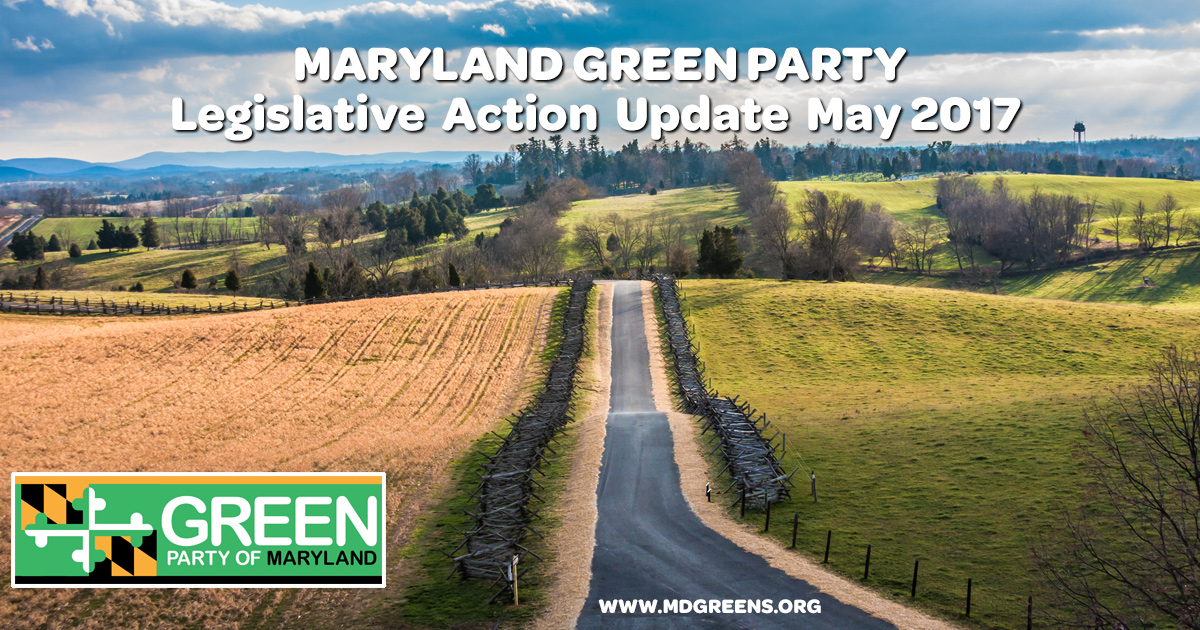 The Maryland Green Party continues to grow and work for a society that is sustainable and just. Please help us by making a donation to support our work. We take no corporate or PAC money; we rely on individual donors such as you. Please consider making a one time donation or a monthly pledge.

On March 30, Green Party member Reverend Annie Chambers won an election to the Resident Advisory Board (RAB) of the Baltimore Department of Housing The RAB was created in 1968 and designed so residents of public housing could participate in decision making for the management of housing projects. It became a model that is now used in hundreds of cities where thousands of residents of public housing participate. 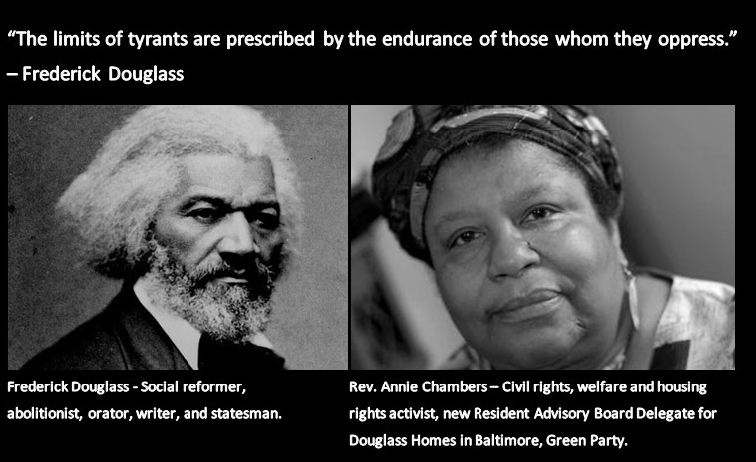 Reverend Chambers was born in 1942 and marched in the 1963 March on Washington. She has been an activist in Baltimore for more than 50 years, involved in the Civil Rights Movement and the Black Panthers. She is best known for her four decades of work as an advocate for welfare rights, housing and civil rights.

This election was important for the residents because of increased development in the Douglass Homes area. The area is between the Johns Hopkins Medical Campus, East Harbor and downtown Baltimore, not too far from the weekly community market under I-83. The city plans to sell additional lots in the area. There is no word on whether Douglass Homes will survive the development plans, but the residents are concerned about their futures. Having Chambers on the RAB will help them know if changes are coming. She is experienced and tenacious when it comes to protecting the rights of people in the community.

The Maryland Green Party was active lobbying the state government this session. The session has ended now and we achieved several important victories. A Major environmental victory was the ban on fracking. For Greens, fracking needed be banned in order to protect our water and the health of our ecosystems. In addition, fracking jobs are dangerous to workers and are not plentiful for sustainable job growth. The legislature also passed the Forest Conservation Act which allowed local governments to establish forest conservation programs with stricter standards than the state, and the Pollinator Habitat Plans bill which requires a pollinator habitat plan to protect bees that are under threat from pesticide use.

Other important bills that passed included Earned Paid Sick Leave which requires employers with 15 or more employees to provide employees with earned sick and safe leave and employers with 14 or fewer employees to provide unpaid earned sick and safe leave. The Pre-K Suspension and Expulsion Prohibition bill prohibits the suspension or expulsion of pre-kindergarten students, and prevents suspension or expulsion for students in kindergarten, first, and second grades unless they have knowingly brought a firearm to school. For these grades in place of expulsion, any offenses require behavior interventions and other support programs.

Additionally the Municipal Minimum Wage Ban failed. It would have prevented local governments from raising the minimum wage.

Several bills that we supported failed, including state funding of Historically Black Institutions, the Maryland Trust Act, bail reform, legalization of marijuana, Community College collective bargaining, bail reform, and our own Common Sense Ballot Access bill. There is much work left to do.

Check out the educational video series and podcast being produced by Maryland Greens!

The Baltimore City local has produced a series of education videos on bail reform, historically Black colleges and universities, Donald Trump's healthcare policy, and the Baltimore City educational funding crisis. The videos are broadcast live on the BCGP Facebook page and stored on their website.

Kevin Zeese and Margaret Flowers have a podcast, "Clearing the Fog," which is also broadcast on We Act Radio, 1480 AM. Recent broadcasts have been on student debt, national health insurance, and "Maryland's Jim Crow Higher Education System."

Tune into Green Media and please donate so that we can bring you even more.