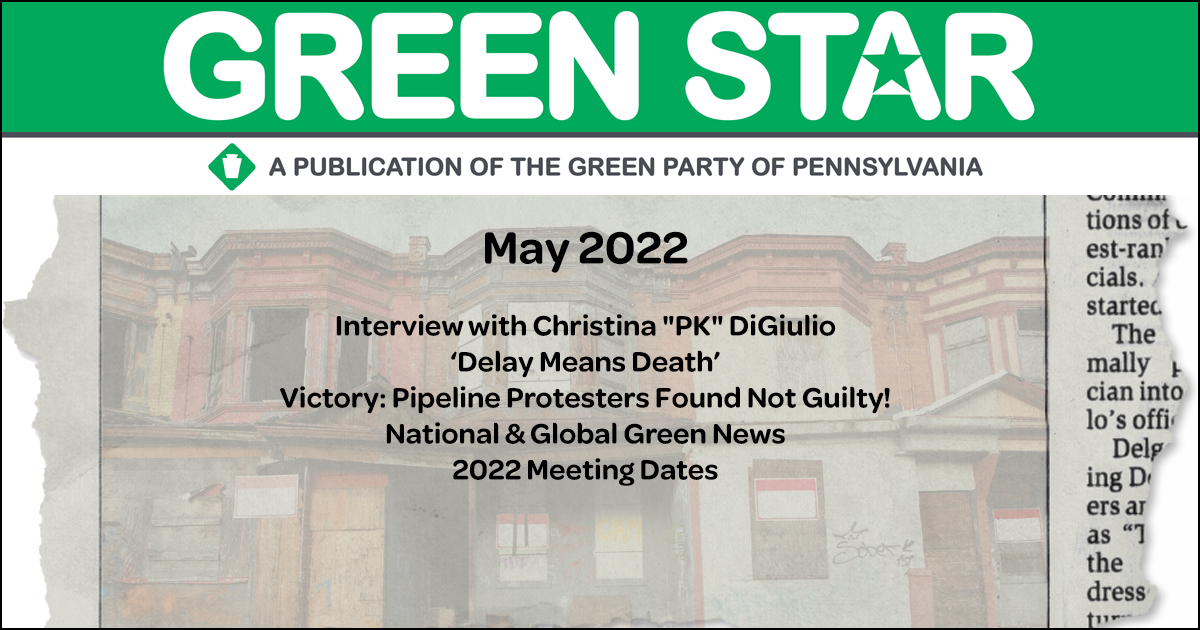 Join us for a brief interview to get to know Pennsylvania native and Lock Haven University alumna, Christina "PK" DiGiulio. Learn about what got "PK" involved and what motivated her to public service. "PK" was interviewed by GPPA Co-chair Beth Scroggin in early March.

Christina “PK” DiGiulio said, “I was reading some of the Intergovernmental Panel on Climate Change (IPCC) report, which was released by the United Nations on February 28, and I was alarmed to learn some new estimates of the effects of our refusal to stop using fossil fuels. I felt like I was standing next to UN Secretary-General Antonio Guterres when he said, “Delay means death.” The IPCC report says that climate change will have a horrendously compounded effect on today’s children . . . .” Story Here

Two Chester County residents  were found not guilty on all charges on April 5. They had been arrested on January 6, 2022, while using civil disobedience to delay construction on the Mariner East 2 pipeline. One of those activists, Christina “PK” DiGiulio, went on to become the Green Party of Pennsylvania’s candidate for Governor of PA.

Following the verdict, defendant “PK” DiGiulio said, “I am relieved and thankful that Judge Feldman ruled today we are not guilty. We feel vindicated because the judge recognized that, to no avail, we exhausted every reasonable option to ensure our health and safety were not being jeopardized by the Mariner East 2 pipeline. Consequently, we had no choice but to resort to peaceful protest on an active construction site to raise awareness of the dangers that have not been addressed by the responsible government agencies. With Judge Feldman’s statement that we are in imminent danger it is our fervent hope that the responsible agencies will fully execute their legal obligation to ensure the health and safety of our communities.”

Green Party of Allegheny County (GPoAC) Media Coordinator Theron Gilliland tells GREEN STAR, “GPoAC had our monthly General Assembly meeting on 4/5, and 32 people were in attendance. One recent event was Westmoreland County Stop Banking the Bomb. GPoAC Chair Matt Nemeth discussed our participation in the Global Climate Strike Die-In, at which he was interviewed by WTAE 4 Action News. We also outlined recent participation as part of international Israeli Apartheid Week. Then, our statewide candidates were introduced, and any who were present shared their vision and goals

“We heard a report on planning for a local Earth Day Strike action that GPoAC endorsed (and later voted to co-sponsor), and we voted to endorse the May Day actions being organized by local Leftist groups, including the Party for Socialism and Liberation and various union organizers.

“GPoAC nominated Zarah Livingston, a healthcare worker and activist, as the Green Party candidate for PA House District 32, with overwhelming support! There was a spirited discussion about supporting the GPUS platform amendment with regards to lowering the voting age to 16; we voted to endorse it.”

On April 2, Michael Bagdes-Canning, the Green Party candidate for Lt. Governor of PA, called for an end to the War On Drugs. In a conversation at his home in Cherry Valley, PA, Bagdes-Canning told voters: “The War on Drugs is more than 50 years old, and it is America’s longest war. Like other wars, it has diverted trillions of dollars from our communities, militarized our police departments, claimed thousands of lives, decimated communities, and, largely, been waged in poor and working-class neighborhoods . . . .” Story Here

“Eliminating Fossil Fuel Pipelines So We Have A Healthy Future”

GENERAL ELECTION, November 8
The following electoral candidates have been endorsed by the Green Party of Pennsylvania.

PK told GREEN STAR, “Why am I running for Governor as a Green Party candidate? Because when the health and safety of the people and the environment are being neglected by our government, I feel it is my duty to do what I can to advocate for the voices being left out of the political conversation . . . . It is time to invest in a JUST TRANSITION, instead of investing in perpetuation of environmental injustices to the many in the name of private profits to the few.”

You may volunteer for PK’s campaign committee at [email protected]

Michael told GREEN STAR, “I’ve spent the last 50 years as an environmental advocate. First it was for wild places then for my community and then, when my eyes were opened, for the entire planet. With opened eyes, I looked around and saw that the same forces that were poisoning our atmosphere were poisoning our politics. The forces fighting a war on the poor and working class were also turning war-making into profit-making. I’ve spent the last decade organizing against the forces of greed. In that fight, I’ve come to know and respect my neighbors and others across this Commonwealth. I’ve seen huge victories when we manage to come together. This campaign is about us.”

You may volunteer for Michael’s campaign committee at [email protected]

Numerous studies have shown that pollution, especially in the northern part of the Nile, has increased over the past decades. The causes are multiple: wastewater and waste dumped directly into the river, agricultural runoff and the discharge of hydrocarbons and chemicals from the industrial sector. All these discharges induce a strong presence of heavy metals (iron, manganese, copper, nickel, cadmium, lead), with dramatic consequences, according to experts, on the state of biodiversity. Story here

Alternative and additional measures, Mr. Ryan stated, will take time. “This won’t all be done in the next two weeks,” he said, pointing towards an examination of best practice in other countries where fuel allowances are varied based on wider energy prices. Some measures would be considered in the budget period, he said.

He added that roughly 700,000 households could take advantage of grants to insulate cavity walls and attics, which could bring down a home heating bill by 25% Story Here

Kenya’s Green Party Chairman fears that with the repeal of Section 34(2A) of the 2016 Act, the country may return to a time when public forest lands were subject to political whims. For Dr. Kalua, passing the section will undo recent forest protection progress made over the past 15 years in restoring public forests and our water catchment areas.

He showed that disempowering the Kenya Forest Service (KFS) will be detrimental to forest conservation efforts in Kenya and encourage deforestation. Story Here